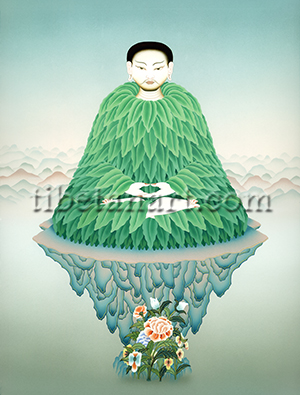 Listed as the seventy-first of the Eighty-four Mahasiddhas, or 'Great Accomplished Ones', whose legendary lives were recounted by the 12th century Indian master Abhayadatta, Udhilipa is one of the less well-known known of these mahasiddhas. The name Udhilipa (Tib. phur-ba) is usually translated as the 'Bird Man', or the 'Flying or Soaring Siddha', and the unusual model I used for depicting this leaf-clad figure is derived from an image of the Mahasiddha Hilapa, which appears in the Sven Hedin collection at the Statens Ethnographic Museum in Stockholm.

Abhayadatta's legend describes Udhilipa as an Indian aristocrat of Devikota, who due to the many charitable deeds he performed in previous lives was now immensely wealthy and sought to experience every pleasure that his imagination conjured up. One day he as he was lying upon his palatial divan he saw an unusual assembly of five coloured clouds in the sky that appeared to assume the shapes of various creatures. One looked like a magnificent swan flying across the heavens, and he thought to himself, “How amazing it would be if I could fly like that.”

Shorty after the Mahasiddha Karnaripa arrived at his mansion begging for alms, and after having provided Karnaripa with the finest nourishment, the aristocrat bowed down before him and asked, “Could you teach a method for flying through the sky for someone like myself who gives alms to a wandering yogi like yourself?”

“Indeed I can!” replied Karnaripa, and then he bestowed the initiation of the Caturpitha-mahayogini-tantra, a 'Mother Tantra' that relates to the 'four seats' (Skt. caturpitha) among the twenty-four sacred geomantic sites of ancient India. Karnaripa then gave instructions for this practice, saying: “You must travel to each of these twenty-four places of great power and obtain a specific alchemical panacea from each of the twenty-four dakinis who abide at these sites, after having first recited a thousand mantras to invoke each dakini. When you have finally received all of these twenty-four elixirs you should pour them into a copper vessel, then into a silver vessel, and finally into a golden vessel. Then you will be able to fly.”

It took Udhilipa twelve years to travel to these twenty-four sacred sites, which are located all across the Indian Suncontinent. Then having perfected this alchemical elixir he gained the siddhi of being able to fly through the sky, and having also simultaneously gained mahamudra-siddhi became known as Udhilipa, the 'Flying Siddha'.

The four main pithas are located at Jalandhara (north), Oddiyana (west), Purnagiri (south), and Kamarupa (east), and symbolically relate to the crown, throat, heart, and navel chakras. While the twenty-four sacred pithas relate to the eight main directional channels that emanate from the heart chakra, each of which divide into three smaller red, white and blue channels that symbolically correspond to the three eight-deity mandalas of Body, Speech and Mind.