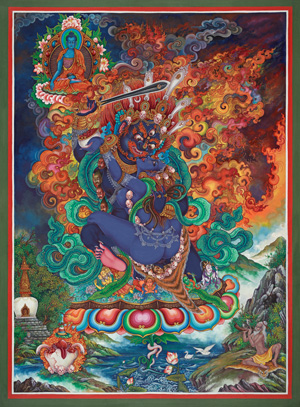 Chandamaharoshana, meaning the "Extremely Violent and Wrathful One", is a very fierce aspect of blue Akshobhya Buddha, who is also known as Achala. The Chandamaharoshana Tantra is an Anuttarayoga or 'Supreme Yoga' Tantra of the 'father-tantra' class, which emphasizes the development of 'method' or skillful means. Of early India origin this Tantra is explicit in the 'twilight-language' of its highly esoteric sexual symbolism, and its practice remains popular in the Newar Buddhist tradition. Achala is one of the 'Ten Wrathful Ones' in Vajrayana Buddhism, and is also popular in Japan as one of the 'thirteen deities' of the Shingon Tradition, where he is known as Fudo Myo-o. This visionary Newar paubha painting by Raj Prakash Tuladhar is the second version of a similar Chandamaharoshana composition that he made in 2002, which is now housed in the collection of the Rubin Museum of Art in New York.

Upon a multicolored lotus and discs of the sun and moon arises the extremely wrathful form of Chandramaharoshana in union with his blue consort, Mamaki. He is blue-black in colour, with a ferocious face, three eyes, and two arms. In kneeling achalasana posture he presses his left knee and foot on the supine forms of the Vedic gods Maheshvara, Vishnu, and Indra, and with his right foot he crushes Brahma. These four deities represent the four maras or 'obstructive demons'. Four-faced yellow Brahma personifies the mara of the 'five aggregates' (Skt. skanda-mara) or 'heaps' - form, feeling, perception, conditioning, and consciousness. Green Vishnu personifies the mara of emotional defilements (Skt. klesha-mara). White Maheshvara personifies the mara of death (Skt. mrityu-mara). And orange Indra personifies the mara of sensual desires (Skt. devaputra-mara).

Chandramaharoshana's powerful limbs are adorned with golden bracelets and filigree bone ornaments. He wears a billowing green silk scarf, a tiger-skin loincloth that has been loosened for sexual intercourse, and a long garland of severed heads. His golden crown is ornamented with five dry white skulls, five radiant jewels, and five silver kikinpa that are crowned with ornate parasols. A crescent moon and a serpent adorn his tawny upward-streaming hair, and two golden victory flags appear above his ears. His red eyebrows and facial hair blazes upward like tongues of fire, his three round and glistening bloodshot eyes gaze down into the face of his consort, and his gaping mouth reveals his white teeth, sharp fangs, and twisting red tongue. The Chandamaharoshana-Tantra described his right eye as gazing upward to annihilate the four maras, his left eye gazing downward to subdue the asuras and nagas, and his third eye as gazing forward to destroy all obstructions upon the face of the earth. With his raised right hand he wields an ornate vajra-handled and double-edged sword. With his left hand he embraces his consort, his index finger raised in the threatening tarjani or 'raised-forefinger' gesture as he holds the coils of a rope snare, which is sealed at both its ends with a small skull.

His naked consort, Mamaki, is blue in colour, with three eyes, two arms, a protruding tongue, and a less wrathful expression. Her two legs are wrapped around the hips of her lord, as she presses every part of her body against his in sexual union. She is adorned with a five-skull crown, ornaments of gold and filigree bone, a silk scarf, and a garland of fifty glistening skulls. With her right arm she embraces the neck of her lord as she holds a curved-knife behind his head, and with her raised left hand she holds a skull-cup full of swirling blood, which she offers to her lord as a libation.

Together they stand within a blazing mass of colourful flames and smoke that twists and swirls upward. A mist arises from the swirling waters of the lotus lake in the foreground, where a pair of white swans glide (a characteristic signature of the artist Raj Prakash). In the lower left corner is a Newar stupa, a stone lingam, and a skull-cup mounted upon a tripod of three small skulls, which contains a fiery offering of the five senses (eyes, ears, nose, tongue, and a heart pierced by a five-coloured victory banner. In the lower right corner is the bearded mahasiddha Naropa, who sits upon a tiger-skin blowing his antelope-horn. Above the swirling smoke and flames in the upper left corner is blue Akshobhya Buddha, the "Unshakeable" Lord of the Vajra Family, of which Chandramaharoshana is his extremely wrathful emanation.