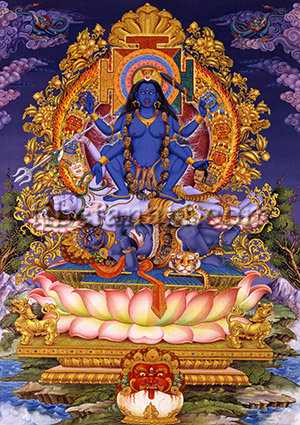 Painted by Amrit Dangol over a four-month period, this composition depicts Mahakali, the "Great Black" goddess, squatting upon the 'corpse-throne' of quiescent Shiva and wrathful Mahakala as she engages in 'reversed sexual union' (Skt. viparita-rati) with her lord, Shiva-Mahadeva. Kali appears as the first of the ten Mahavidya or "Great Knowledge" tantric goddesses of the female Shakta Tantra traditions.

The golden base of Kali's square throne rests upon the ground, its two lower tiers decorated with lotus petals, and on the top of its jewel-studded plinth stand two gilded ornamental lions that commonly serve as temple guardians throughout the Kathmandu Valley. In front of the throne is a large blood-filled skull-cup on a golden base that contains the wrathful red head of Bhairava, his blood-stained tongue protruding, and his three-eyed face adorned with golden earrings and a five-jeweled crown. A pink double-lotus rests upon her throne's plinth, and within this lotus is a three-dimensional yantra that appears in the form of a square 'earth-city' (bhupura). Its top is ornamented with linear patterns radiating towards its four corners, and each quadrant has its own gateway and directional colour: blue (south), yellow (west), red (north), green (east). This colour sequence accords with her title as Dakshina Kali, meaning "South-facing Kali".

Mahakala, the "Great Black One", lies on his back across this yantra, his two hands holding a curved knife above a blood-filled skull-cup in front of his heart. Mahakala is black and extremely wrathful, with three round bloodshot eyes, sharp teeth and fangs, blazing red facial hair, and a mass of matted red hair piled-up as curls. He is adorned with gold ornaments, a jeweled five-skull crown, a tiger-skin loincloth, a garland of severed heads, and a long red scarf with one of its pointed ends hanging over the lotus throne.

Above Mahakala lies the 'corpse' of blue Shiva, who rests serenely on his back with his head and feet supported by two pink lotuses, which arise from ornate golden stems on either side of Kali's lotus throne. With his right hand Shiva makes the abhaya-mudra of dispelling fear, as he holds a small silver pearl or lingam between the tips of his index finger and thumb. And with his left hand he holds a trident, with a damaru or 'pellet-drum' and a silk ribbon hanging from its shaft. Shiva gazes lovingly towards Kali with his three blissfully intoxicated eyes, his forehead marked with the Shaivite tripundra of three vermilion lines, and his matted hair-locks piled up into a topknot, from which the waters of the River Ganga gently cascade. Shiva wears conch-shell earrings; bracelets, armlets, and necklaces made from rudraksha beads, and silver anklets. The naga-serpent Vasuki coils about his neck and right shoulder, and his tiger-skin loincloth has been loosened for sexual intercourse.

Kali blissfully squats on the breast and thighs of Shiva in sexual union, his erect penis penetrating her vagina. Her naked body is blue-black like storm clouds, her lithe form endowed with firm round breasts and aroused nipples, and her long red tongue protrudes from her blood-stained mouth as she reveals her sharp upper teeth. Her three bloodshot eyes are wild, piercing, intoxicated with passion; blood trickles from each side of her mouth, and her long black and disheveled hair locks hang freely behind her back. She wears golden bracelets, armlets and anklets; an ornate golden choker; a girdle made from the severed forearms of corpses; a garland of freshly severed and blood-dripping demonic heads, and her earrings are fashioned from the corpses of two young Brahmin children. With her first right hand she makes the boon-granting varada-mudra of supreme generosity, and with her upper right hand the abhaya-mudra of protection and dispelling fear. With her first left hand she clutches the severed head of a demonic enemy by its hair, her index-finger raised in the threatening tarjani gesture. And with her upper left hand she wields aloft a flame-licked iron sword or cleaver, its tip marked with a sun-moon symbol.

On the crown of Kali's head is a translucent orb of the full-moon, with the white horns of the new crescent moon resting upon her crown. Behind this orb is the geometric structure or 'sacred device' of her yantra, its central golden dais embossed to form a downward-pointing red triangle, which is sealed at its centre with Kali's bija or 'seed-syllable' KRIM. The lower tip of this inverted triangle just touches the crown of Kali's head, and surrounding its circular dais is a red fire-wheel, a lotus-wheel of sixteen petals, a swirling blue wind-wheel, and an outer lotus-wheel with sixteen main petals. Outside of these four concentric wheels is the square bhupura or 'earth-city' of her yantra, with its four directional gateways and coloured quadrants ornamented with scrolling parawa patterns. Like the flat yantra that forms her upper throne, these quadrants are coloured blue (south), yellow (west), red (north), and green (east). The red outer edge of the bhupura is enveloped with little yellow flames, and crowning the top of her yantra and aura is a canopy of seven naga-serpents, each with a golden naga-jewel crowning its hooded head and a leaf-shaped golden pendant hanging from its mouth.

Little tongues of white flame blaze around Kali's naked body, outlining her form against the scrolling red roundels of her inner aura. Her fiery outer aura is decorated with the heads of the Eight Bhairavas (Skt. Astabhairava), with four appearing on each side of her aura. These wrathful three-eyed heads are adorned with earrings, chokers, and jeweled five-skull crowns topped with silver Newar kikinpa blades. On the left arc of Kali's aura are the heads of: Unmatta- (white); Krodha- (blue); Ruru- (red), and Sanhara-Bhairava (black). And on the right arc are: Bhisana- (green); Kapala- (orange); Asitanga- (red), and Chanda-Bhairava (blue).

The outer edge of Kali's aura is encircled with small tongues of yellow, orange and red flames. Outside of this is an ornate jewel-like canopy of gold leaves, flowers and buds that have been painted to resemble burnished gold, as have all the gold components of this painting, and the only area where real gold has been applied is upon the embossed dais of her yantra. Two symmetrical dragons coil among the swirling clouds in the dark upper sky, and above the turbulent water, misty cliffs and distant mountains of the lower landscape appear the jewel-bearing canopies of two wish-granting trees.