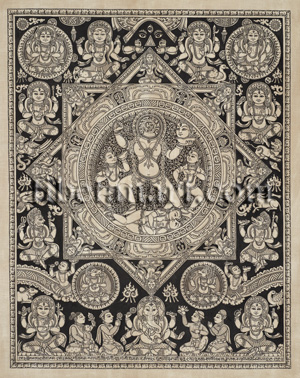 Chinnamasta, meaning the "Severed Head" goddess, appears as the sixth of the ten Mahavidya or "Great Knowledge" goddesses of the Shakta-tantra tradition, and is by far the most striking. As both a Hindu and Buddhist goddess of self-sacrifice, she also manifests in the Vajrayana Buddhist tradition as the headless form of Vajrayogini. Chinnamasta abides in a charnel ground amidst a blazing mass of fire as she dances in pratyalidha posture upon the copulating forms of Kama, the god of love and his consort Rati. In the Newar tradition, however, this couple are usually represented by the voluptuous red form of Parvati lying upon white Shiva in 'reversed' sexual union with Parvati lying on top of Shiva, as shown here.

Chinnamasta is three-eyed, nubile, youthful and ruby-red in colour, and her naked form is adorned with gold and bone ornaments, and a long garland of fifty dry white skulls. She appears with her two yogini attendants, white Varini (left), and blue Dakini (right), who are similar in form to her. All three goddesses hold a curved knife and skull-cup in their right and left hands, although Chinnamasta has just decapitated her own head and holds it in her skull-cup. Traditionally three jets of blood squirt forth from the three symbolic 'life-channels' of Chinnamasta's severed neck and cascade into the mouths of each of these three tantric goddesses. Here, however, an anticlockwise swirl of blood fills the inner circular area of her halo, while her inner aura is decorated with the swirling roundels of the blaze of awareness fire that surrounds her.

Chinnamasta's form is encircled by her stylized outer aura of lotus-petals and flame segments, and outside of this is a ring with eight wave-like cardinal and inter-cardinal sections that are separated by eight rows of grinning skulls. These skulls represent the "Eight Great Charnel Grounds", and the wave-shapes between them the eight great rivers that traditionally separate these eight charnel grounds. Outside of this is a lotus-circle with eight directional petals, with the small attributes between each petal relating to the eight male deities that occupy the eight corners of the two intersecting squares that form the bhupura or 'earth-expanse' of her yantra. These eight cardinal and inter-cardinal deities are the Asta Dikpalas or "Lords of the Eight Quarters", the group of eight great Vedic Gods that rule over the eight quarters of the universe. Frequently the two Vedic Gods of creation and preservation, yellow Brahma and green Vishnu, are included to represent the 'ten directions', with Brahma at the zenith and Vishnu at the nadir.

1. In the East quadrant (top) is the yellow sky-god Indra with his horizontal third-eye, who holds a vajra and parasol in his right and left hands.

2. In the South quadrant (right) is blue-black Yama, the 'Lord of the Dead', who holds his skull-topped club of death and a rope noose in his right and left hands.

3. In the West quadrant (bottom) is the white water-god Varuna, who makes the abhaya-mudra of fearlessness and holds a naga-serpent with his two hands.

4. In the North quadrant (left) is the yellow wealth god Kubera, who holds a citron fruit and a lotus in his right and left hands.

5. In the Northeast quadrant (upper left) is white Isana, the great three-eyed god Mahadeva-Shiva, who holds a skull-cup and trident in his right and left hands.

6. In the Southeast quadrant (upper right) is the red fire-god Agni, who holds the attributes of a jewel and a three-feathered dart (Skt. bhindipala) in his two hands.

7. In the Southwest quadrant (lower right) is blue Nairriti, the three-eyed 'Lord of the Rakshasa Demons' who holds a sword and a shield in his two hands.

8. In the Northwest quadrant (lower left) is the blue wind-god Vayu, who makes the abhaya-mudra of fearlessness and holds a billowing flag with his two hands.

At the bottom centre of this composition is elephant-headed white Ganapati, who is being worshipped with offerings by a Newar woman with her child and three male dignitaries. With his first pair of hands Ganesh holds a white radish and three laddus – his favourite vegetable and sweets. With his second pair of hands he makes the boon-granting varada-mudra and the abhaya-mudra of protection. And with his third pair of hands he holds a lotus and a sacred text.

Seated in two circular auras of fire above the four Newar devotees are the white lion-headed guardian goddess Simhini (left), and the yellow tiger-headed Vyaghrini (right), who each hold a curved-knife and skull-cup in their right and left hands, and support a khatvanga in the crook of their left arms. To their left and right are the kneeling figures of two river-goddesses, who represent the Ganga and Yamuna rivers that flow towards them.

Encircling Chinnamasta's Yantra clockwise from the bottom left corner to the bottom right corner are the "Eight Mother Goddesses" (Skt. Astamatrika) of the ancient Shakta Tantra tradition. These are the female counterparts of seven great Vedic gods, who along with Mahalakshmi embody the primordial energy or shakti of these male Vedic deities. 1. Rudrani, from Rudra-Shiva: 2. Chamunda, from Yama: 3. Vaishnavi, from Vishnu: 4. Indrani, from Indra: 5. Kaumari, from Kumara: 6. Mahalaksmi: 7. Varahi, from Varaha: 8. Brahmani, from Brahma. This is the clockwise order in which these eight Mother Goddesses appear in this composition. They all have three eyes and four hands, and hold skull-cups in their lower right hands.

1. Rudrani or Maheshvari (bottom right) is white, and her vehicle is the white bull above her. She makes the bindu-kapala mudra with her first two hands, and holds a damaru and trident in her two upper hands.

2. Chamundra (above) is red and fierce with an emaciated body. Her vehicle is a male corpse above her. She makes the bindu-kapala mudra, and holds a rope-noose and a skull-topped club in her two upper hands.

3. Vaishnavi is green, and her vehicle is a garuda. She makes the bindu-kapala mudra, and holds a discus and club in her two upper hands.

4. Indrani (upper right) is yellow or flesh-coloured with a horizontal third eye, and her vehicle is a white elephant. She holds a skull-cup and makes the boon-granting varada-mudra with her first two hands, and holds a vajra and bell in her two upper hands.

5. Kaumari (upper left) is red, and her vehicle is a peacock. She holds a skull-cup and makes the abhaya-mudra of fearlessness with her first two hands, and holds a three-feathered dart (bhindipala) and a spear in her two upper hands.

6. Mahalakshmi (below) is golden-yellow, and her vehicle is the white lion below her. She makes the bindu-kapala mudra, and holds a golden mirror (darpana) and a Newar vermilion powder container (sinhamu) in her two upper hands.

7. Varahi is red with the wrathful head of a boar, and her vehicle is a black buffalo above her. She makes the bindu-kapala mudra, and holds a fish and an iron hook in her two upper hands.

8. Brahmani (bottom left) is yellow, and her vehicle is the white goose above her. She makes the bindu-kapala mudra, and holds a rosary and sacred text in her two upper hands.


Seated within the two circular auras of fire at the top left and right of this composition are Bhairavi and Rudrani, both with four arms and three eyes. Bhairavi makes the bindu-kapala-mudra with her first two hands and holds a sword and shield in the upper two. While Rudrani makes abhaya-mudra and holds a skull-cup with her first pair of hands, and a horn and trident with her second pair. Various yantras and tantric symbols appear in the background of this composition, along with funeral pyres, bones, hanging silk valances, and the iconic image of a three-eyed face and paired forearms at the top centre.