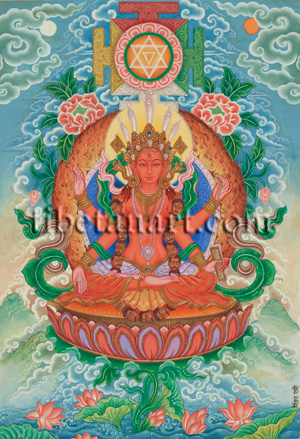 Bhairavi, meaning the 'Terrible or Terrifying', is the female counterpart of Bhairava, the wrathful form of Rudra-Shiva, and she appears as the fifth of the ten Mahavidya or 'Great knowledge' goddesses of the Hindu female or shakta-tantra traditions. Like Bhairava she has many different forms, and is depicted here in her four-armed aspect as Tripura Bhairavi, the 'Terrifying lady of the Three Cities'. In Vajrayana Buddhism she is identified with Kalaratri, the "Dark Night", the seventh of the nine Navadurga Goddesses, whose emaciated form appears under the feet of both Heruka Chakrasamvara and Vajrayogini, with Bhairava-Shiva as her consort.

The complexion of Tripura Bhairava is likened to the radiance of a thousand rising suns, and she is youthful, lusty and ruby-red in colour, with three lotus-like intoxicated eyes and four arms. Her full breasts are firm with aroused nipples and smeared with fresh blood. She sits in vajra-posture upon the golden seed-head of a multicolored lotus that arises from the turbulent and misty waters of a lotus lake. She wears lower garments of embroidered silks, a long billowing green silk scarf that entwines about her body, a garland of freshly severed heads, and the golden ornaments of jeweled earrings; bracelets, armlets and anklets; and short, medium and long necklaces. Her elaborate five-skull golden crown is adorned with jewels, five long sword-like and silver Newar kikinpa blades, and two golden victory flags. With her lower right hand she makes the boon-granting varada-mudra of supreme generosity, and with her upper right hand the abhaya-mudra of dispelling fear. With her lower and upper left hands she holds her two attributes of a sacred text and a rosary of ruby-red beads.

Bhairavi's blue inner aura is decorated with roundels and encircled by a ring of white skulls and an outer aura of fire, with flowers and clouds surrounding it. Above her halo is the yantra of Tripura Bhairava, with its central dais inscribed with two intersecting triangles that create a six-pointed star, with a downward-pointing yoni or female triangle at its centre. A lotus circle of sixteen petals encircles the yantra's dais, with the square and four directional gateways of its bhupura or 'earth-city' outside. Each quadrant of the bhupura has a central lotus petal and is colored: white (east), yellow (south), red (west), and green (north).