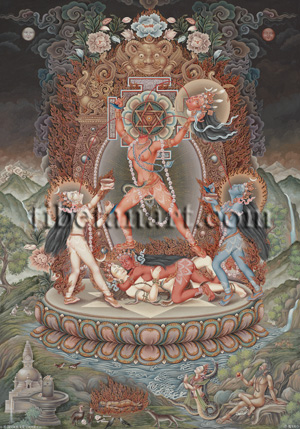 Chinnamasta or Chinnamunda, the 'Severed Head or Decapitated' goddess, is the third of the ten 'Great Knowledge' or Mahavidya goddesses. Collectively these ten mahavidyas represent the specific manifestations of the 'great goddess' Devi or Durga, who assumed these powerful aspects in order to pacify, subjugate or destroy some of the most potent and malevolent forces in the universe. Of these ten goddesses Chinnamasta is the most terrifying and disturbing in appearance. The original design for this composition was made by the brilliant Newar artist Udaya Charan Shrestha, and this painted version was made by Sundar Sinkwal.

Chinnamasta and her two yogini attendants, Varini and Dakini, manifest together amidst a blazing mass of awareness fire as Chinnamasta dances upon the copulating forms of white Shiva and red Parvati, who lie together on the wide moon-disc of a multi-colored double lotus. In reversed sexual union Parvati lies on top of Shiva, her naked body adorned with gold and bone ornaments, her hair disheveled, her arms embracing Shiva's neck, and her three eyes gazing passionately at his face. Shiva lies passively upon the six-pointed star that adorns the moon disc, wearing a loosened tiger-skin loincloth, a five-skull crown, rudraksha bead ornaments, and the naga-serpent Vasuki that coils around his neck. Shiva has three eyes, and his matted locks and topknot are crowned with a white crescent moon.

Chinnamasta is ruby-red in colour, youthful, beautiful, passionate, and radiant like a million suns. She dances ecstatically in pratyalidha posture, with her right leg bent and her left leg extended. With her right hand she holds aloft the curved knife with which she has just severed her own head, and with her outstretched left hand she holds a skull-cup containing her own freshly severed head, with its three eyes gazing upward, and its mouth wide open as she drinks the stream of blood that cascades from the severed central vein of her neck. Her severed head is adorned by a golden five-skull crown with silver kikinpa blades, a victory flag, and a crescent moon. Chinnamasta's naked body is adorned with ornaments of gold and filigree bone. She wears a golden neck choker, two pearl necklaces, a chained silver medallion, a garland of fifty dry white skulls, and a fire-disgorging naga-serpent that coils around her torso as a sacred thread.

Her two attendants, red Varini and blue-black Dakini, stand gazing upwards at Chinnamasta's left and right sides, each with their own fiery halo. These two naked goddesses are similar in appearance to Chinnamasta, with disheveled hair, gold, bone and skull ornaments, and both hold a curved knife and a skull-cup in their right and left hands. With open mouths they drink the streams of blood that cascade from the severed left and right veins of Chinnamasta's neck. These three blood-spurting veins symbolize the unobstructed psychic energies of the subtle-body's median nerve or central channel, with its two subsidiary solar and lunar channels, which are respectively personified in the forms of Chinnamasta, Varini and Dakini.

Light rays emanate from Chinnamasta's body to form her inner aura, which is encircled by an arc of white skulls and the complex scrolling pariwar pattern of her jeweled outer aura. Above Chinnamasta's neck is the geometric form of her yantra or sacred 'diagram or instrument', consisting of a lotus within a downward-pointing triangle within an interlocking six-pointed red star, an eight-petal lotus, and an outer square bhupura or 'earth-city' with four directional maddala-like gateways. Behind the yantra is the fiery upper torana of her aura, with the large serpent-devouring head of Cheppu, the 'face of glory' (Skt. kirtimukha) at the top, with two fierce makara or 'water-monsters' below. Smoke, clouds and flowers appear behind the topmost flames, with the facial features of the white full moon and red sun in the upper sky.

In the lower landscape are a Newar stupa and a Shaivite stone lingam adorned with jasmine flowers. Then a charnel ground scene with vultures, ravens, bones, a jackal, and a body burning on a funeral pyre. Then a female naga-serpent queen making obeisance with her palms folded, and a naked Indian sadhu with matted hair, who sits on a tiger-skin and holds a jewel in his right hand. The auspicious symbols of paired hares, birds, and deer appear in the background landscape of the Himalayan foothills.