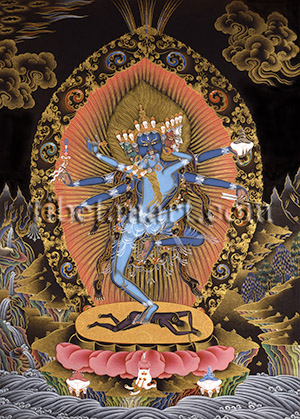 Mahamaya (Tib. Gyutrul Chenpo: sGyu 'phrul chen po), meaning the “Great Illusion or Great Magical Net”, is a yidam or tantric meditational deity whose practice originates from the Sanskrit text of the Mahamaya Tantra. This 'mother-tantra' practice is particularly associated with Dream Yoga in the Kagyu traditions, especially in the Shangpa Kagyu lineage, where Mahamaya appears as one of the 'Five Tantra Deities', along with Hevajra, Chakrasamvara, Guhyasamja and Vajrabhairava. These tantric cycles were disseminated through the Indian mahasiddhas Abhayakara, Maitripa and Rahula, and the yoginis Niguma and Sukhasiddhi, who transmitted these teachings to the 11th Century Tibetan master Khyunpo Naljor, who was the founder of the Shangpa Kagyu Tradition.

Mahamaya is wrathful and blue-black in colour, with four faces, four arms, and two legs. He stands in dancing bow-and-arrow posture with his left leg raised and his right foot pressing upon a corpse that lies prone upon his golden sun disc, lotus throne, and vajra-rock formation. He appears here in sexual union with his naked blue consort Buddha Dakini, who presses herself against her lord with her left leg extended and her right leg wrapped around his waist. She is fierce with two arms, one face and three eyes, and is adorned with the five bone ornaments, a five-skull tiara, and her tawny twisted hair hangs freely down her back. With her extended left hand she circles a vajra-handled curved knife towards the ten directions, and with her right hand she embraces Mahamaya's neck as she holds a blood-filled skull-cup behind his four heads.

Mahamaya's four faces are blue-black (front), green (right), red (left), and white (rear). Each face has three piercing eyes, a gaping mouth, sharp white teeth and fangs, upward-blazing facial hair, and is adorned with golden earrings and a five-skull crown. His tawny hair streams upwards above his two topknots, and his radiant aura is encircled by a jeweled ring of awareness fire. His naked body is adorned with the bone ornaments, a flayed human-skin that hangs over his shoulders and back, and a garland of fifty severed heads strung together on intestines. With his two right hands he holds a trident-topped khatvanga and a bow, and with his two left hands a blood-filled skull-cup and an arrow.

According to the lineage of practice Mahamaya and his consort may appear in various forms, with both having one or four faces, two or four arms, and either his right or left leg can press down upon the corpse and sun disc. And they usually appear together in a five-deity mandala with blue Vajra Dakini (east), yellow Ratna Dakini (south), red Padma Dakini (west), and green Karma Dakini (north) encircling them.