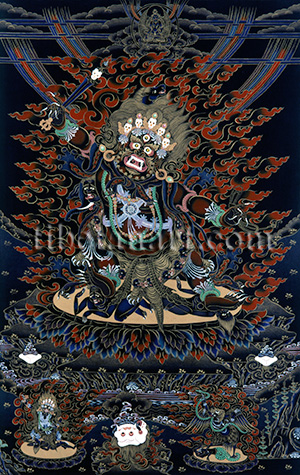 The 'Three Wrathful Ones'

This composition depicts the auspicious assembly of the “Three Wrathful Ones – Hayagriva, Vajrapani, and Garuda”, known in Tibetan as the Ta Chag Khyung Sum. The triple empowerment, mantra recitation and visualization practice of this sadhana is designed to protect practitioners from the harm, obstacles and illnesses caused by malevolent spirits and naga-serpents, which may result in diseases such as epilepsy and cancer. Hayagriva (Ta) is an emanation of Buddha's speech, Vajrapani (Chag) of Buddha's mind, and Garuda (Khyung) of Buddha's body. These three (Sum) deities may be represented as a trinity, as depicted here, or they may be combined as a composite figure of blue Vajrapani with the red horse head of Hayagriva emerging from his crown, and with a white Garuda flying above the horse's head.

The central figure of Hayagriva (Tib. Tamdrin) dominates this composition. He is extremely wrathful and dark red in colour with one face and two arms. He stands leaning to the right in pratyalidha posture, as he crushes underfoot two demonic enemies that lie prone on the golden sun disc of his multi-petal lotus and vajra-rock formation. His powerful body is adorned with the bone, gold and eight naga-serpent ornaments, a five-skull crown, and a garland of fifty severed heads. As garments he wears a tiger-skin loincloth, a silk belt, a flayed human-skin shawl that is tied around his neck and hangs behind his back, and a flayed elephant-skin that is draped over his shoulders and back. He has three round red eyes, tawny facial hair, a gaping mouth with four sharp fangs, and above his upward streaming hair emerges the head of a neighing blue horse. With his extended right hand he wields aloft a jewel and skull-topped club, and with his left hand he makes the threatening tarjani gesture as he casts a rope-noose or snare. He is surrounded by a mass of blazing awareness fire, and enthroned amidst clouds and rainbows above him is blue Vajra Akshobhya Buddha, who holds a golden vajra upon the palm of his left hand.

In the bottom left corner is the diminutive blue-black figure of Vajrapani, who likewise stands in pratyalidha posture as he crushes underfoot an obstructive demon that lies prone upon his golden sun disc and lotus throne. Vajrapani is similarly wrathful with three bulging eyes, a gaping fanged mouth, upward-streaming hair, and wears bone and gold ornaments, a tiger-skin loincloth, a serpent necklace, and a long silk scarf that billows about his powerful body. He abides amidst a blazing mass of awareness fire and wields aloft a golden vajra in his right hand, while his left hand makes the threatening tarjani gesture at the level of his hip.

In the bottom right corner is Garuda, the “Lord of Birds”, with the torso and arms of a human, two round eyes, and the face, wings, thighs and legs of a mighty feathered bird of prey. Garuda likewise abides amidst a blazing mass of awareness fire, while his sharp talons grasp the demonic head and serpentine tail of a naga-serpent that lies prone upon his golden sun disc and lotus throne. Garuda wears bone bracelets and necklaces, a crescent moon adorns his crown and flowing mane, his multicolored feather wings are spread, and with his sharp beak he bites into the body of the long poisonous serpent that he grasps with both of his hands. Below each side of Hayagriva are two skull-cups of swirling nectar and blood, and at the bottom centre is a large upturned skull with its scalp, which is likewise filled with swirling nectar.