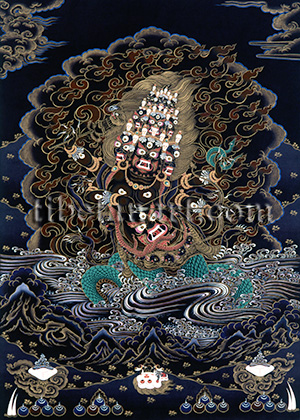 In early Indian mythology Rahu or Rahula (Tib. Khab-jug Chen-po; gZa ra-hu-la) was a raven-headed demon (Skt. asura), who cunningly assumed the guise of a god (Skt. deva) in order to consume the 'nectar of immortality' (Skt. amrita) that had just been procured during the 'Churning of the cosmic ocean'. Having witnessed this deceit the Sun and Moon informed the great god Vishnu, who hurled his fiery discus at Rahula, severing his head just as the amrita entered his throat. Rahula's body fell to the earth, causing great earthquakes to occur. But his newly immortalized head – having again assumed its normal raven form – flew off into the skies, enraged at the treachery of the Sun and Moon. Rahula, the 'Lord of Eclipses', is thus forever doomed to chase the Sun and Moon across the sky and cause eclipses. But as soon as the dark shadow of his raven-head has swallowed them, they re-emerge once more from his severed throat. Astronomically, both the severed head and body of Rahula are identified as the 'eclipse planets' Rahu and Ketu, and correspond to the two points where the paths of the Sun and Moon intersect with the ecliptic, which are respectively known as the north and south lunar nodes, or 'dragon's head' and 'dragon's tail'.

In some early Buddhist scriptures Rahu is described as seizing the gods Chandra (the Moon) and Surya (the Sun), but he is compelled to release them because of their devotion to their protector, the Buddha, who would cause the head of this 'Seizer' (Skt. rahu) to explode into countless pieces.

As the 'Wild God of the Skies', Rahula is the serpent-tailed ruler of all planetary deities, and recognized as the wrathful emanation of Vajrapani that causes eclipses, whose dark shadow can instigate strokes and epilepsy in human beings. Among various spirit-related afflictions - such as the poisoning induced by naga serpents (Tib. klu), or the madness induced by demon-kings (Tib. gyalpo) - the ki-kang illness (stroke or apoplexy) of the gZa demon is inflicted on whomever the shadow of Rahu's raven-head falls.

In the Tibetan Nyingma tradition, Rahula - along with Doje Legpa and Ekajati - is one of the three principal protectors of the Dzogchen teachings, the Nyingthig tradition in particular, and the terma tradition in general. According to legend Rahula was first oath-bound by Shri Simha, and again soon after by Padmasambhava in a charnel ground. The instructions for subjugating Rahula were transmitted through Garab Dorje (Skt. Prahevajra) and Vimalamitra to Padmasambhava and Nyangben Tingdzin Zangpo in Tibet. Subsequently, sadhana texts and protector rituals pertaining to Rahula were concealed as termas that would later be revealed by various other tertons.

Rahula is extremely wrathful and terrifying, with nine faces, four arms, and a dark-maroon or smoky-brown color. Each of his nine angry faces have distorted features, three round red eyes, and a gaping mouth that reveals its four sharp fangs and twisting tongue. Each face is adorned with a jewel-topped five skull crown, and crowning his nine stacked faces is the head of a black 'King of the Ravens', which gazes menacingly upward towards the heavens. This raven head has three piercing eyes, its beak is made of meteorite iron, its tongue is a blazing sword, and its jaws are like razor-sharp knives. An apoplectic fit falls upon anyone who is eclipsed by the shadow of this raven head, while from each of Rahula's nine gaping mouths issues a poisonous mist of pestilence and disease. Rahula's tawny-yellow hair streams upward above all of his faces, like the cataclysmic fire at the end of time (Skt. kalagni).

Rahula's body is powerful and strong, with four arms and a protruding stomach. His entire body is adorned with a thousand glancing and piercing eyes, and his abdomen with a large wrathful mouth that is ravenous enough to swallow both the sun and moon, or to eclipse the entire light of the three realms. He wears jewel ornaments, the six bone ornaments, and writhing naga-serpents. Around his waist he wears the freshly flayed skin of a tiger as a short loincloth; and the flayed and bloody skin of a human enemy is draped across his shoulders and back, with its head hanging at his right side. Around his neck he wears a poisonous black serpent as a sacred thread, and a long garland of fifty freshly severed heads. The lower half of his body manifests in the form of a coiling blue-black or green naga-serpent, which writhes amidst a turbulent ocean of blood in which corpses are floating. The ocean is often contained in a red triangular box or dharmodaya decorated with skulls, which is surrounded by a ring of sharp vajra-mountains. He abides amidst a blazing mass of smoke and wisdom-awareness fire.

With his first right hand Rahula brandishes aloft a makara or crocodile banner (Skt. makara-dhvaja), which is fashioned from the flayed skin of a water-monster or crocodile mounted on a wooden shaft. With his first left hand he makes the threatening tarjani or raised forefinger gesture, as he holds a long noose fashioned from a venomous serpent. With his second pair of hands he draws back the taut string of a bow, with the long shaft of its arrow aimed at the heart of a demonic enemy or vow-breaker.