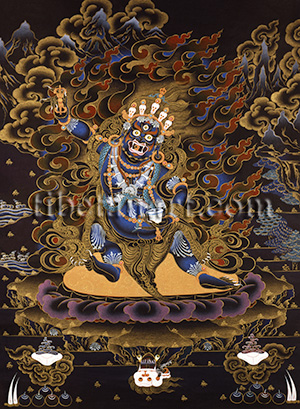 Vajrapani (Tib. Chagna Dorje), meaning "Vajra in Hand", is an embodiment of the spiritual power of all the Buddhas, and along with Avalokiteshvara (compassion) and Manjushri (wisdom) appears as one of the “Lords of the Three Enlightened Families”. As the wrathful "Lord of the Vajra Family" he is often identified as the lord of the yaksha demons who subdues negative forces, and as the "Lord of Secrets" (Skt. Guhyapati) who serves as a guardian of all the Vajrayana Tantras. In the Sutra traditions Vajrapani was a disciple of the Buddha, who served as a protector or bodyguard of the Buddha, where he was also known as Mahasthamaprapta who possessed the great strength of an elephant. In his peaceful bodhisattva aspect Vajrapani appears as one of the Buddha's "Eight Close Sons", whose specific symbol or hand attribute is the vajra.

Vajrapani is extremely wrathful and dark-blue in colour, and appears here in his "Fierce Rage" aspect (Tib. Phyag rdor gtum drag) with one face, two arms, and the corpulent and powerful body of a yaksha spirit. He stands in pratyalidha posture, with his right leg bent and left leg extended, upon a golden sun disc and an open lotus amidst a blazing mass of awareness fire. His facial expression is fierce, with a gaping mouth, a twisting red tongue, four sharp fangs, and three round and baleful red eyes. The bristling hair on his head and face is tawny-red in colour and streams upwards like fire, and the top of his head is crowned with a half-vajra, the symbol of blue Akshobhya Buddha, the "Lord of the Vajra Family" to which Vajrapani belongs.

He is adorned with the gold ornaments of a five-skull crown, earrings, bracelets, armlets and anklets, and long, medium and short necklaces. Filigree ornaments of bone adorn his wrists, arms, ankles, thighs and crown, with an ornate bone wheel necklace looped around his chest, with a poisonous serpent serving as his sacred thread. A silk belt binds the tiger-skin loincloth about his waist, while a long silk scarf billows around his shoulders and lower body. With his right hand he wields aloft a golden five-pronged vajra, and with his left hand held at the level of his hip he holds an upturned silver bell, with his index finger raised in the threatening tarjani gesture. More commonly Vajrapani's left hand makes the threatening tarjani gesture in front of his heart, and he also may hold a rope noose in this hand.

In the bottom corners are paired elephant tusks and jewel offerings, and above these two cloud-borne skull-cups that contain swirling blue nectar (left), and fresh blood (right). Between these is an upturned skull with scalped hair attached, which contains the 'wrathful flower' of the five torn-out sense organs: eyes, ears, a nose, a tongue and a heart.

The tantric practices of Vajrapani are common to all schools of Buddhism throughout Central and Southeast Asia, and similarly amongst all schools of Tibetan Buddhism. The earliest Indian transmissions date back to the mahasiddhas Indrabhuti, Kukuraja, Saraha, Nagarjuna, Tilopa and Naropa. Within the Nyingma tradition they originate with Garab Dorje, who received all the Dzogchen tantras and oral transmissions directly from Vajrasattva and Vajrapani, and then transmitted these teachings on to Manjushrimitra and Padmasambhava. The Tibetan manifestations of Vajrapani include the Minister Gar and King Ralpachen, and as a tantric deity Vajrapani appears in several different aspects. One particular practice assimilates the forms of Vajrapani, Hayagriva and Garuda into a triple-deity aspect, the performance of which is believed to be extremely effective in alleviating life-threatening diseases. Vajrapani's pure land is known as Alakavati, the 'curled or braided place', which is also identified with Kubera's paradise realm on Mt Meru.