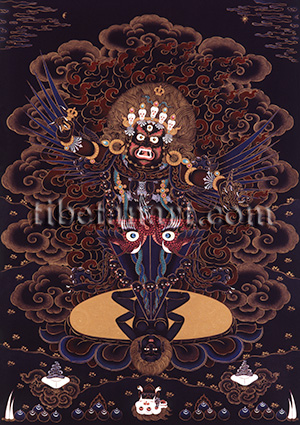 Guru Dragpur, the “Wrathful Teacher of the phurba or Dagger”, is a special aspect of Guru Rinpoche (Padmasambhava) in his fierce form as Guru Dragpo, the "Wrathful Guru", which was first revealed as a terma or 'Revealed Treasure' tradition practice by Drugpa Padma Karpo (1527-92), who founded the Tibetan Drugpa Kagyu Tradition.

Guru Dragpur is extremely wrathful and dark-red in colour, with one face and two arms, and is similar in appearance to Guru Dragpo except that his lower body manifests in the form of a triple-bladed ritual-dagger or phurba (Skt. kila). He has three bulbous red eyes, a gaping mouth with four sharp fangs and a twisting tongue, and his tawny-yellow head and facial hair streams upward like fire. He is adorned with a five-skull crown, gold and bone ornaments, a serpent necklace, and a garland of severed heads. A flayed human-skin shawl hangs around his neck and back, an elephant-skin hangs over his shoulders and back, and he is surrounded with a blazing mass of fire and billowing storm clouds.

With his raised right hand he wields aloft a five-pointed golden vajra, and with his lowered left hand he clutches a fierce blue-black iron scorpion. The three-sided blue iron dagger that forms his lower body emerges from the fierce gaping mouth of a makara or 'water-monster', with tendrils, sharp fangs, two bulging eyes and a twisting snout. Pairs of entwined serpents descend symmetrically from the makara's wide-open jaws towards the sharp point of the kila or dagger, which pierces the heart of a demonic enemy. This enemy manifests in the form of a lingam or 'effigy', who lies on his back upon a golden sun disc and lotus, with his ankles and wrists manacled behind his back. Below him are jewel offerings, and paired elephant tusks, two skull-cups filled with swirling nectar and blood, and an upturned central skull with its scalp that contains the 'wrathful flower' of the five torn-out sense organs (heart, eyes, ears, nose, and tongue).