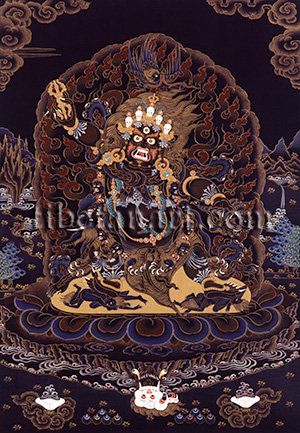 Guru Dragpo, the “Wrathful Spiritual Teacher”, is a ferocious meditational aspect of Guru Rinpoche, who manifested in this form when he received teachings from Vajravarahi and several other dakinis. His various practices arise from the terma or 'Revealed Treasure' traditions of the Tibetan Nyingma School, where certain deities arise from the outer, inner, and secret manifestations of Guru Rinpoche or Padmasambhava. Guru Dragpo may appear as a single figure or with a consort, with two or six arms, and with one or three faces. He is usually dark-red in colour, and his consort is blue. Guru Dragpo's Nyingma terma revelations include those of Nyangral, Ratna Lingpa, Pema Lingpa, Jetson Nyingpo, Terdak Lingpa, and Chogyur Lingpa.

Here Guru Dragpo manifests in his two-armed and single-faced aspect. He is extremely wrathful and dark-red in colour, and stands upright leaning towards the right in pratyalidha posture with his two arms extended outwards. He has three bulbous red eyes, a gaping mouth with four sharp fangs, and his tawny-yellow hair of his face and heads streams upward like fire. He is adorned with a five-skull crown, gold and bone ornaments, a serpent necklace, a garland of severed heads, and a tiger-skin loincloth. A human-skin shawl is draped around his neck, an elephant-skin hangs over his shoulders and back, a serpent-devouring garuda swoops above his crown, and he is surrounded with a blazing mass of fire and storm clouds.

With his raised right hand he wields aloft a wrathful golden vajra with open prongs, and with his lowered left hand he clutches a large blue-black 'iron' scorpion. He stands upon a golden sun disc and lotus that rests upon a vajra-rock foundation, with his two feet crushing two entwined pairs of demonic enemies. In front of him are jewel offerings, two skull-cups containing swirling nectar and blood, and an upturned central skull with its scalp that contains the five wrathful sense organs (heart, eyes, ears, nose, and tongue).