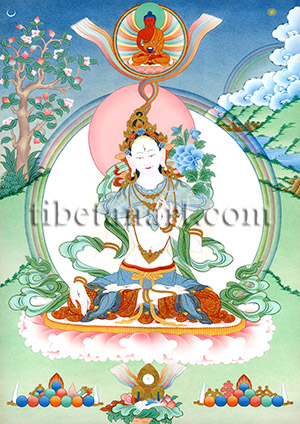 White Tara (Skt. Sita Tara: Tib. Drolma-karmo) is the long-life aspect of Tara, the "Saviouress", the ever-popular Buddhist goddess of mercy and compassion. In her white long-life aspect she is also known as Saptalocana Tara, or "Seven-eyed Tara", and as an important yidam or meditational deity she is know as "Wish-fulfilling Wheel White Tara" (Skt. Chinta-chakra Sita Tara), which is the aspect in which she appears here. As one of the three principal Buddhist longevity deities, White Tara also frequently appears as part of a trinity with Amitayus and Usnisavijaya. White Tara's meditational practices are mainly employed to confer long-life, alleviate illnesses, and to remove the obstacles that are indicative of an untimely death. Thangkas of White Tara and the 'Trinity of Long-Life Deities' are frequently commissioned for such purposes, or to auger an auspicious rebirth for a deceased relative or friend.

White Tara sits in vajra-posture upon a white moon disc on the golden centre or sun-disc of an immaculate pinkish-white lotus. She is beautiful, peaceful, graceful and youthful like a sixteen-year-old, with full breasts, a narrow waist, and a sweetly smiling face. Her complexion is radiant and white like a full autumnal moon. In this composition the aureole disc of a full autumnal moon forms both her aura and her backrest, which is encircled by rainbows and radiates beams of pure light throughout the ten directions. She is adorned with seven bow-shaped eyes, with her three facial eyes representing the perfection of her body, speech and mind, and the four eyes in her palms and soles symbolizing the "Four Immeasurables" of her loving kindness, boundless compassion, sympathetic joy, and perfect equanimity. With her lowered right hand she makes the open-palmed boon-granting varada-mudra of supreme generosity. And with her left hand she makes the abhaya-mudra of protection or giving refuge, as she holds the stem of an immaculate bluish-white utpala lotus blossom in front of her heart. This lotus blossoms at the level of her ear and bears a fruit, an open blossom and a bud, representing the Buddhas of the three times – past, present, and future.

She wears the five divine silk garments and eight jeweled ornaments of a sambhogakaya goddess, with these being her golden tiara; earrings; bracelets, armlets and anklets; and short, medium and long necklaces. Half of her long sapphire-black hair is bound up into a topknot, while the other half hangs freely behind her back. Her golden tiara is adorned with little flowers and five jewels, and from the crown of her head emerge two entwining rainbows that embrace the halo-like sphere or tigle of rainbow light that encircles the form of red Amitabha Buddha, the "Lord of the Padma or Lotus Family" to which White Tara belongs. Amitabha wears the three orange-red robes of an ordained bhikshu or Buddhist monk, and with his two hands joined upon his lap in the dhyana-mudra of meditative equipoise he holds his nectar-filled blue alms-bowl.

In front of Tara's lotus-seat is a convoluted lotus leaf bearing the five sensory objects of a golden mirror (sight), a pair of cymbals (sound), a conch full of perfume (smell), fruits (taste), and a red silk cloth (touch). On either side of these are two stacks of precious jewels, along with the "seven precious insignia of the chakravartin or universal monarch" - white tusks (elephant); rhinoceros horn (horse); triple-eyed gem (jewel); crossed white lozenges (general) on the left. And coral (wheel); square earrings (minister); round earrings (queen), and tusks on the right. A fruit-laden tree, rainbow, water and clouds appear in the background landscape.