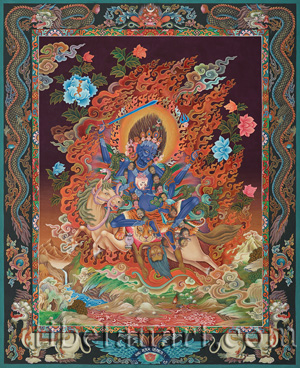 Shri Devi (Tib. Paldan Lhamo), the 'Glorious Goddess', is the main female protector of Tibet and of Tibetan Buddhism in general; and because of her association with Mahakali, the Great Black One', she was adopted as a protector by the Newar merchants, artisans and shopkeepers that have traded and worked in Tibet for generations, who have since established a shrine to this goddess at Boudhnath Stupa near Kathmandu. The Newars identify Shri Devi with Kali or Chamunda, and also with a spirit-goddess named Chhwasa Ajima. The Newar term 'chhwasa' refers to a place where such unclean things as a dead person's clothes or the placenta of a newborn baby may be left. Traditionally the chhwasa deity is embodied in the aniconic form a stone, which is usually located in a charnel ground or at a crossroad. And the Newar term 'ajima', meaning 'grandmother', can be applied both to maternal ancestors and to the eight Ajima or great 'Mother-goddesses' (Skt. astamatrika). During every Newar festival a food offering is traditionally left for Chhawasha Ajima at a local crossroad, the belief being that a failure to propitiate this grandmother-spirit correctly may result in people losing their appetites, becoming ill, or dying. Until recently most infant deaths in the Valley were attributed to the retribution of Chhwasa Ajima, who is also known as Chhwaskamini.

Ajima is also the goddess of smallpox, and her temple near Swayambhu Stupa is a very popular shrine for parents seeking to protect their young children. Ajima may be identified with Sitala - the Hindu goddess of smallpox, or more specifically with Hariti - the Buddhist protector of children. According to legend Hariti was a malevolent yakshini spirit who had given birth to five hundred children, but she would regularly steal other people's children to feed to her own offspring. However, one day the Buddha took Aji, the youngest daughter of Hariti, and hid her in his alms-bowl to teach her cannibal mother a lesson. The distraught Hariti searched everywhere for her missing daughter, and only realized the pain she had inflicted on other children's parents when the Buddha returned her own child to her. From this traumatic experience Hariti vowed to protect all children, and she remained at Swayambhu after the Buddha had taught there. Hariti-Ajima, the 'Mother of Aji', is often depicted as a two-armed goddess accompanied by five small children. But Chhwaskamini is usually represented in the wrathful two or four-armed form of the Indo-Tibetan goddess Shri Devi, whose vehicle is a mule.

Here Chhwaskamini (Shri Devi) appears in the form of the 'smoke-clad' goddess, Dhumavati (Tib. Dusolma). She is extremely wrathful and black in colour, with an emaciated body, four arms, and three eyes. Like Chamunda she has a malignant smile, an emaciated bone-lined face, sagging breasts, and skeletal arms and legs. In a maelstrom of smoke, wind and fire she rides sidesaddle upon her mule across a swirling ocean of blood. The reins and harnesses of her mule are made from poisonous serpents, and her saddle blanket is fashioned from the flayed skin of her cannibal-demon son. On the rump of her mule is an eye that gazes backwards, with the mule's three eyes representing her ability to perceive the three worlds and the three times.

She is adorned with jewels, gold and bone ornaments, a five-skull crown, a tiger-skin loincloth, a billowing green silk scarf, with a small peacock feather parasol and a white crescent moon adorning her crown. Her tawny hair streams upward, her three round eyes are bloodshot, and she wears a long garland of severed heads. A human corpse lies within her mouth (not shown); her right ear is adorned with a small leaping white lion, and her left ear with a hissing green snake.

Shri Devi possesses 'five magical weapons' that were given to her by the gods. The first is a 'notched wooden tally-stick', depicted here beneath her left leg. The second is an empowered 'ball of variegated thread', which hangs from the rear of her mule's saddle. The third is a 'bundle of red curses' (not shown) that hangs from the front of her saddle: and below this are her fourth and fifth magical weapons; a 'skin sack full of contagious diseases', and a pair of 'black and white divination dice'.

The barren rocks and hills of the lower landscape, with its central ocean of blood, indicate the qualities of Shri Devi's desolate abode. The outer torana of the painting is decorated with a pair or roaring lions and ascending dragons, the winged emblem of a garuda at the bottom, and the crowning serpent-devouring image of Chepu or kirtimukha at the top.