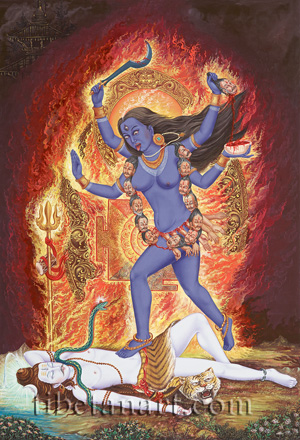 This painting depicts Dakshina Kali in her traditional standing four-armed aspect. She strides upon the recumbent body of Shiva, who reclines peacefully upon the ground with his left hand supporting his head. Shiva is bluish-white in colour, with a mustache, three eyes, and the mark of a sandalwood tripundra on his forehead. He wears a tiger-skin loincloth; rudraksha bead bracelets, armlets and necklaces; silver anklets, and golden earrings. His horn trumpet hangs from the belt at his waist, and the great naga-serpent Vasuki rises threateningly above his neck. A radiant crescent moon adorns his crown, and his matted hair-locks are piled up into a topknot from which the central white stream of the River Ganga cascades. Behind Shiva's head ascend his twin attributes of a trident and a damaru, which is tied onto the trident's shaft.

The Sanskrit term 'dakshina' means South-Facing or facing towards the right, and in this form Dakshina Kali represents the more auspicious and orthodox manifestation of this goddess, as opposed to her 'vama' or left-handed aspect as an extremely violent goddess of the Shakta Tantra traditions. Nevertheless, Dakshina Kali is formidable in appearance with a deep-blue complexion and an extremely fierce countenance.

Dakshina Kali gazes passionately down towards Shiva as she strides above him, with her left foot instigating her first contact with his bodily form. Her beautiful naked body is adorned with ornaments of gold and filigree bone, a pearl necklace, an apron of severed human forearms, and a long garland of blood-dripping heads that are strung together on twisted intestines. Her breasts are full, her nipples aroused, and she has three piercing, bloodshot and intoxicated eyes, sharp white teeth, and a long protruding and bloodstained red tongue. The long black locks of her disheveled hair billow out freely behind her back, and from the crown of her head there emanates a stream of smoke that manifests into many small white OM syllables. With her lower right hand she makes the abhaya-mudra of protection, while with her upper right hand she wields a bloodstained sacrificial cleaver. With her upper left hand she holds the freshly severed head of an enemy, the blood of which pours down into the skull-cup she holds in her lower left hand.

Kali's scrolling golden aura and the ornate torana of her halo are enveloped in a blazing mass of fire and background smoke, with the gilded roof of her famous temple near Pharping to the south of the Kathmandu Valley appearing in the upper left corner. At the centre of Kali's fiery aura appears her yantra with its four directional gateways, which bears the inscribed syllable OM upon its central dais.