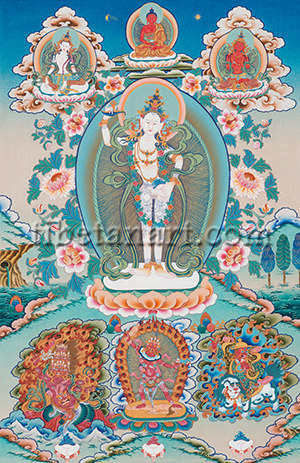 This thangka, from the Khandro Thugthik or 'Dakini Heart Essence' cycle of the Dudjom Tersar lineage, depicts the dakini Yeshe Tsogyal with three peaceful deities above, and the three principle protectors of the Dzogchen and 'Revealed Treasure' or terma tradition of the Nyingma School below. The Khando Thugtik practice arose spontaneously as a 'mind treasure' to Dudjom Rinpoche when he was just twenty-five years of age. The main practice relates to the dakini Yeshe Tsogyal in her outer, inner, secret, and innermost secret forms, where the outer form is Yeshe Tsogyal, the inner form is red Kurukulla, the secret form is red Simhamukha (Tib.Senge Dongma), and the innermost secret form is black Troma Nagmo. These four dakini goddesses traditionally appear in the Khando Thugthik assembly, with Dudjom Lingpa, Vajradharma, and Dudjom Rinpoche in the sky above. However, in this composition the lower assembly consists of the three Dzogchen and terma protectors, Ekajati, Rahula and Dorje Legpa, who are concisely known in Tibetan as the 'mother, planet and oath-bound trinity' (ma gza' dam gsum).

At the centre stands the dakini Khandro Yeshe Tsogyal, who is naked and radiant white in colour, with a slightly wrathful expression, two eyes and two arms. She stands upright with her two legs straight upon the white moon disk of her pink lotus-seat, with her left foot flat and her right foot slightly raised. Her nubile body is beautiful and youthful like that of a sixteen-year-old, and half of her long black hair is bound up into jeweled topknots, while the other half hangs freely about her shoulders and back. She wears a golden tiara adorned with flowers and three jewels; golden earrings; bracelets, armlets and anklets; short, medium and long necklaces; a bone apron; bone bracelets and armlets; a long garland of red and blue flowers, and a long green silk scarf that loops and billows about her body. With her raised right hand she circles a vajra-handled curved knife towards the ten directions to terrify all obstructive demons, and with her left hand she holds a skull-cup full of swirling blue nectar at the level of her hip. Her rainbow-like aura radiates with the scintillating golden light rays that emanate from her body, and she is encircled by a profusion of flowers.

Directly below Yeshe Tsogyal is the female protector Ekajati (Tib: ral chig ma), meaning the 'Single Lock of Hair'. As a guardian of powerful mantras Ekajati is maroon or dark red in colour, and extremely wrathful and fierce in appearance. She is endowed with one single sagging breast, one sharp triangular tooth, one baleful red eye that stares piercingly from her forehead, and a single braided 'iron' hair-lock that rises up from the crown of her head. She wears bone ornaments, a five-skull crown, a loosened tiger-skin skirt that exposes her vagina, a 'cloud-collar' made from blue and indigo storm clouds, a garland of severed heads, and a human-skin cloak that hangs behind her back. With her right hand she wields aloft a club made from a mummified human corpse, and with her left hand she holds the warm and blood-dripping heart of an enemy. She stands in pratyalidha posture, with her two feet crushing underfoot a demonic enemy that lies upon the golden sun-disc of her multicolored lotus, and her radiant aura is encircled by a blazing mass of awareness fire and clouds.

In the lower left is Khyabjug Chenpo Rahula, the 'All-pervading great planetary and eclipse demon' Rahu or Rahula, who is extremely wrathful and maroon in colour, with four arms and ten heads. Nine of these heads are stacked up into three rows of three heads, which are all extremely fierce with three round red eyes, a gaping mouth, sharp teeth and fangs, upward-blazing facial hair, and each of these nine heads is adorned with a five-skull crown. His tenth head is that of a terrifying black raven that arises above his uppermost crown, with a sharp beak made from meteorite iron. And the shadow of this raven's head is said to cause a stroke or an epileptic fit on whomever it happens to fall. His lower body takes the form of a coiling naga-serpent, which writes within a swirling ocean of blood. His powerful upper body is endowed with a 'thousand eyes' that appear all over his torso and arms, and in his pot-bellied stomach is a voracious face that can swallow the sun, moon, and planets. With his first pair of hands he holds a drawn bow and arrow, which he aims at the heart of an enemy. And with his second pair of hands he holds aloft a makara-dhvaja or 'crocodile-banner', and a long poisonous serpent as a snare or noose. He wears golden ornaments, a tiger-skin loincloth, a human-skin shawl, a silk belt, and a long silk scarf that billows about his body. He abides amidst a blazing mass of fire, and is encircled by dark storm clouds and the ring of sharply pointed peaks that appear in front of him.

In the lower right is Damchen Dorje Legpa (Skt. Vajra Sadhu), the 'Oath-bound Indestructible Excellence', who controls all the various classes of proud or 'arrogant spirits' (dregs pa). He is ferocious and dark red in colour, with three round red eyes, a gaping mouth, a twisting red tongue, sharp white teeth, upward-blazing facial hair, and his tawny hair hangs and curls about his shoulders. He wears a wide-brimmed golden monastic hat with a knurled crest on its domed top, embroidered boots made from felt and leather, and various garments of multicoloured and embroidered silk that billow about his stout body. As adornments he wears gold earrings, gold bracelets, and the gold-rimmed silver divination mirror of an oracle hangs around his neck. With he raised right hand he wields a nine-pointed golden vajra, while with his left hand he feeds a warm and blood-dripping human heart towards his mouth. His vehicle is a fierce white snow lion with a turquoise mane, which he rides swiftly upon amidst a billowing mass of wind and dark storm clouds.

At the top centre of this composition is Amitabha, the red Buddha of 'Boundless Light' and the 'Lord of the Padma or Lotus Family' to which both Yeshe Tsogyal and Guru Rinpoche belong. Amitabha sits in vajra-posture upon his moon and lotus seat, wearing the three red robes of a monk, and supporting a blue alms-bowl with his two hands that rest upon is lap in the dhyana-mudra of meditation.

In the top left corner is white Avalokiteshvara, the bodhisattva of great compassion, who sits in a posture of royal-ease upon his moon and lotus seat amongst the clouds. He wears the eight-jeweled ornaments and five silk garments of a sambhogakaya deity, and sits peacefully with his left hand resting behind his thigh and his right hand resting on his knee.

In the top left corner is red Vajradharma (Tib. rdo-je chos), a peaceful manifestation of Vajrapani, and the primordial Buddha of the 'mother' or wisdom class of tantra. He sits in vajra-posture upon his moon and lotus seat amongst the clouds, wearing the eight-jeweled ornaments and five silk garments of a sambhogakaya deity. With his hands crossed before his heart in vajrahumkara-mudra he holds the wisdom and method attributes of a vajra and bell. Vajradharma may be identified as the source of the 'Eight Heruka Sadhanas' in the Nyingma Tradition, and also with Guru Rinpoche in his peaceful form as Pema Thotreng Tsal, the 'Lotus Garland of Skulls', who is red in colour and can either hold the attributes of a vajra and bell, or a damaru and a longevity vase.