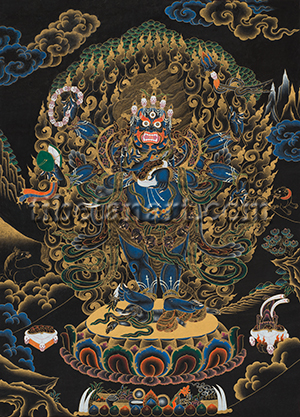 This gold-on-black thangka depicts the powerful protective deity Mahakala in his six-armed aspect as the principal protector of the Shangpa Kagyu tradition of Tibetan Buddhism. Mahakala, the 'Great Black One', stands in an upright posture (Skt. samapada) with his heels together as he tramples underfoot the elephant-headed form of Ganapati, who has been thrown face down onto his golden sun disc and multicoloured lotus. Ganapati, the 'scurf-created' son of Shiva and Parvati, is white in colour and wears divine silks and jewel ornaments, and with his right and left hands he holds a white radish (Skt. mueli) complete with leaves, and a jewel-disgorging mongoose. The force of Mahakala's weight is sufficient to 'crush the three worlds', which symbolically causes a cascade of jewels to stream from Ganapati's mouth, anus, and the pores of his skin. In Buddhism Ganapati is regarded as both a creator and a remover of obstacles, who is particularly associated with wealth, and frequently appears being subjugated underfoot by various other manifestations of Mahakala.

Six-armed Mahakala (Tib.mgon po phyag drug pa) is extremely wrathful and blue-black in colour, like the 'clouds at the end of time'. His fierce face has three round and angry red eyes, upward blazing facial hair, and a gaping mouth that reveals his white teeth, his four sharp fangs, and his twisting red tongue. He laughs ferociously as he roars out the syllables HA HĀ HUM HŪM PHAT PHĀT, which grinds to dust all maras, enemies, obstructive and haughty demons. His forehead is smeared with cemetery ash, the three bulges of his cheeks and nose with fresh blood, and his chin and throat with human fat. The locks of his tawny hair stream upward above his five-skull crown, and his topknot is bound by a blue snake and crowned with an iron half-vajra, which contains the seed-syllable HŪM of blue Akshobhya Buddha, the 'Lord of the Vajra Family' to which Mahakala belongs.

As garments Mahakala wears a tiger-skin loincloth that is bound with a silk belt, and a protective vajra-scarf that circles around his upper body with long silken ends that billow about his two principal arms and lower body. The upper part of this scarf is made from rhinoceros hide and is decorated with flowers. The freshly flayed and bloody skin of an elephant is stretched across his back, with its head and forelegs to his right, and its tail and hind legs to his left. Around his neck he wears a garland of fifty freshly severed and blood-dripping human heads, and a long green serpent as a sacred thread. He wears ornaments of gold, the six bone ornaments, and small naga-serpents coil around his bracelets, armlets and anklets, which are also garlanded with little silver bells that tinkle from the tremulous energy of his body.

With his first two right and left hands he pounds a vajra-handled curved knife or chopper into the skull-cup that he holds in front of his heart, with the skull-cup containing the fresh blood and raw flesh of enemies and obstructive demons, which serves as his sustenance or food. With his second right hand he holds aloft a bone rosary fashioned in the form of thirteen dry and white carved skulls; and with his third right hand he rattles a damaru or pellet-drum. This damaru is fashioned from the skulls of two young Brahmins, and has double pellets or strikers, and its handle is adorned with a triple-valance made from coloured silk brocade. With his second left hand he holds aloft a skull-topped blazing iron trident that is adorned with white silk ribbons; and with his third left hand he holds a black vajra-noose that is sealed at its ends with a small half-vajra and a hook. Mahakala shines with an unbearable brilliance amidst a blazing mass of awareness fire, and his back is supported by the trunk of a mighty sandalwood tree, the dense canopy of which appears above the fiery tongues of his upper aura.

Mahakala abides within a landscape of swirling clouds, hills, angular rocks and foliage, with a wild ass and a hunting dog appearing in the background. In the lower foreground is a row of jewels with a blazing gem at the centre, and behind these jewels are two groups of auspicious offerings that are contained by two pairs of white elephant tusks. The group to the left of centre are the 'Eight Auspicious Substances', which consist of:

And to the right of centre are the 'Peaceful Offerings of the Five Senses':