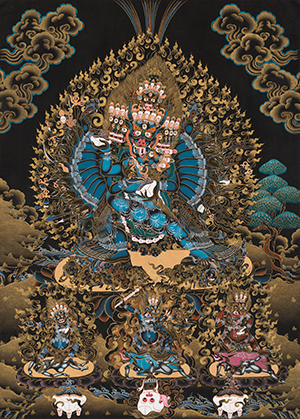 Yamantaka with three aspects of Yama

This gold-on-black composition depicts the wrathful form of Yamantaka or Vajrabhairava and his consort, with the outer, inner and secret forms of the protector Yama Dharmaraja appearing below. Yamantaka, the 'Destroyer (antaka) of the Lord of Death (Yama)', is a wrathful aspect of the wisdom deity Manjushri, who is also commonly known as Vajrabhairava (Tib. rdo rje 'jigs byed), meaning the 'Indestructible Terror'. Vajrabhairava is an important yidam or 'meditational deity' belonging to the 'father' or method class of Highest Yoga Tantra (Skt. anuttarayoga-tantra) practices, which emphasizes the development of method or 'skilful means' (Skt. upaya). His practice is common to the three main Sarma or 'new translation' schools of Tibetan Buddhism, the Sakya, Kagyu, and Gelug. Within the Gelug School the three main Highest Yoga Tantra yidam deity practices are those of Vajrabhairava, Chakrasamvara and Akshobhya-Guhyasamaja, while the Sakya also include Hevajra along with these same three major yidam deities. And within the various branches of the Kagyu traditions Vajrabhairava is most extensively practiced within the Drigung Kagyu tradition.

Vajrabhairava is extremely wrathful and blue-black in colour, with nine faces, thirty-four arms, and sixteen legs. He is youthful, naked and powerful, with a large stomach and strong limbs, and he stands upon the golden sun disc of his multicoloured lotus, leaning towards the right in pratyalidha posture as he crushes underfoot eight mammals, eight birds, and eight great Brahmanic Indian gods.

His main face is that of a ferocious blue-black buffalo, with a pair of sky-blue horns that extend upward towards the realm of Brahma, with blazing tongues of vajra-fire curling around their tips. The snout of his buffalo face is wrinkled in anger and red like molten copper, and the force of his breath is like the terrifying wind at the end of time. His three round red eyes are bulging and bloodshot, and his tawny-red facial hair and eyebrows blaze upward like tongues of fire. He bares his four sharp white canine teeth, his tongue twists like lightning, and his voice resounds with the eight-fold vajra-laugh of a fierce Heruka deity. His alert ears point upward, and the bulges of his forehead, cheeks, and chin are smeared with funeral ashes, fresh blood, and human fat.

On either side of his buffalo face are three terrifying faces, which are coloured yellow, blue, and red (outer) to his right; and smoky-gray, white, and black (outer) to his left. The three faces to his right are described as being 'angry and taut', while the three faces to his left 'bare their sharp fangs'. Each of these faces is extremely wrathful, with three round and angry red eyes, upward blazing facial hair, and a grimacing mouth that reveals its sharp fangs and twisting red tongue. Each face is adorned with a jewel-topped crown of five dry white skulls, which are ornamented with little clusters of hanging bone beads.

Vajrabhairava's naked body is adorned with the filigree bone ornaments of bracelets, armlets and anklets; a bone belt and apron with sixty-four hanging loops; and a circlet of bone beads that loops around his chest with the insignia of an eight-spoke bone wheel positioned above his heart. Around his neck he wears a garland of fifty freshly severed and blood-dripping heads that are strung on a twisted thread of human intestines, and two long black serpents coil around his upper body as a sacred thread.

With his first pair of right and left hands Vajrabhairava embraces his consort as he holds a vajra-handled curved knife or chopper above a blood-filled skull-cup in front of his heart. His consort, Vajra-vetali or Dorje Rolangma (rdo rje ro langs ma), meaning the 'Indestructible Zombie', or 'Resuscitated Corpse', is extremely fierce and blue in colour, with one face, two legs, and two arms – her right hand holding a vajra-handled curved knife behind his neck, and her left hand offering a skull-cup full of blood to one of his mouths. In the bliss of their sexual union she presses every part of her body against his, with her left leg wrapped around his waist and her right leg extended. Her naked body is adorned with the five bone ornaments, a garland of fifty dry white skulls, a five-skull crown, and her tawny hair hangs freely down her back. She has three round angry red eyes, a gaping mouth, sharp fangs, a twisting red tongue, and upward blazing facial hair. Together they abide amidst a blazing mass of awareness fire.

Vajrabhairava's other thirty-two hands are arranged into groups of eight frontal and eight rear hands on either side, such that two levels of radiating arms and hands extended around his body. With his upper or second pair of right and left hands he stretches the freshly flayed and bloody skin of an elephant behind his back, with it two left legs appearing on either side of his sixteen feet.

And with his eight rear left hands he holds: (1) a severed arm and hand: (2) a cotton funeral shroud: (3) a criminal impaled upon a wooden stake: (4) an iron brazier: (5) a blood-filled skull-cup with its scalp attached: (6) a severed arm and hand that makes the threatening tarjani gesture: (7) a precious staff bearing a silken triple-valance: (8) a 'wind-cloth' for fanning the sacrificial homa fire.

Each of his seventeen right hands point upwards, with their index fingers raised in the threatening tarjani gesture, while his left hands point downwards, with their index fingers similarly raised in the gesture of threat. The palms of his hands and the soles of his feet are blood red in colour, and the stacked and talon-like toes of his sixteen feet spread outwards like a fan or concertina.

With each of his eight right feet he tramples upon a male mammal, which are from right to left: (1) a human; (2) a buffalo; (3) a bull; (4) a donkey; (5) a camel; (6) a dog; (7) a ram; (8) a fox. Underneath these eight mammals are the four great Indian gods: (1) yellow four-faced Brahma: (2) white Indra: (3) blue-black Rudra: (4) green Vishnu. These four worldly gods personify the four maras or 'obstructive demons', and are described as 'having been pushed over onto their faces', and they all wear the divine silk garments and jeweled ornaments of the gods.

With his eight outstretched left feet he tramples upon eight different kinds of birds, which are from left to right: (1) a vulture: (2) an owl: (3) a crow or raven: (4) a parrot: (5) a falcon: (6) a kite or eagle: (7) a black myna bird or a red cockerel: (8) a white swan or goose. Underneath these eight birds are the four Hindu gods: (1) six-faced red Kumara or Karttikeya (the war-god): (2) elephant-headed white Vinayak (Ganesha): (3) white Chandra (the Moon): (4) red Surya (the Sun). These four Indian gods have been similarly pushed over onto their faces, and are likewise adorned in the divine silk and jeweled ornaments of the gods.

"In brief the collective symbolism of Yamantaka's nine faces; two horns; thirty-four arms plus his body, speech and mind; sixteen legs; erect penis; eight mammals and eight birds; his upward flowing hair and his nakedness, is as follows:"

“The subject matter of the nine categories of scriptures (nine faces) is essentially the doctrine of the two truths (two horns) – the relative and absolute. The method for understanding these two truths is the thirty-seven aspects of the path to enlightenment (thirty-four arms, plus body, speech and mind). The essence of this path is an understanding of the sixteen types of emptiness (sixteen legs), and the method to attain this is to remain inseparable from great bliss (erect penis). The fruit of this path is the attainment of the eight mundane (eight mammals) and the eight supreme (eight birds) siddhis or accomplishments, which results in nirvana (upward streaming hair), wherein all obstacles are eliminated (nakedness)”.


The Outer, Inner, and Secret Aspects of Yama Dharmaraja

Across the bottom of this thangka appear the outer, inner and secret aspects of Yama Dharmaraja, the 'Lord of the Dead', with the 'outer' form of Yama appearing at the centre. He is naked and blue-black in colour, with an erect penis and the fierce black head of a buffalo - with three round and angry red eyes, a gaping mouth, sharp fangs, and upward streaming tawny hair. He abides within a blazing mass of awareness fire, and is adorned with a five-skull crown, the six bone ornaments, and a garland of fifty severed heads. With his right hand he wields aloft his skull-topped and skeletal 'staff of death', and with his left hand he casts a rope-snare or noose. Chamunda, his blue-black and naked consort, stands astride of Yama's extended left leg. She is extremely fierce and wears a five-skull crown, golden earrings, and an ox-hide that covers her back as a shawl. With her left hand she offers a blood-filled skull-cup to Yama's mouth, and with her right hand she holds a skull-topped iron trident. Together they stand upon the leopard-skin that serves as a saddle-blanket for Yama's fierce blue buffalo vehicle, which crushes underfoot the corpse of a demonic female enemy that lies upon the golden sun-disc of his lotus seat.

In the bottom left corner stands the dark blue 'inner' aspect of Yama, who has the wrathful face of a demon, with three round red eyes, a gaping mouth, sharp fangs, and blazing facial hair. He abides within a blazing mass of awareness fire, and his tawny hair streams upward above his five-skull crown. He wears gold and bone ornaments, a tiger-skin loincloth, a garland of fifty severed heads, and a long silk scarf that billows about his body. With his right hand he holds aloft a curved knife or chopper, and with his left hand he holds a blood-filled skull-cup in front of his heart. He stands leaning toward the left in alidha posture, with his two feet trampling upon a demonic enemy that lies upon the golden sun-disc of his lotus seat.

And in the bottom right stands the dark red 'secret'aspect of Yama, who is similar in appearance to the outer blue form of Yama at the centre, but he appears without a consort. His penis is erect and his naked body is adorned with bone ornaments, a five-skull crown, and a garland of fifty severed heads. With his right hand he holds a blazing eight-faceted red gemstone in front of his heart, and with his left hand he holds a blood-filled skull-cup at the level of his hip. He stands in pratyalidha posture upon his red buffalo vehicle, which tramples upon the corpse of a demonic enemy that lies upon the golden sun-disc of his lotus seat.

In front of these three aspects of Yama are skull offerings, with the central offering being an upturned skull with its scalp attached, which contains the wrathful offering of the five torn out sense organs: eyes, ears, nose, tongue, and heart. While the two skull-cups in the left and right corners contains swirling blue nectar or alcohol (left) and fresh blood (right).