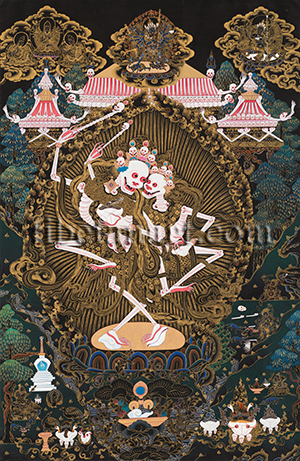 Citipati - Lords of the Charnel Grounds

This gold-on-black thangka of two entwined dancing skeletons, who are commonly known as Citipati or Chitipati, is a copy of a nineteenth century colour thangka from the Potala Palace in Lhasa, Tibet. The Sanskrit term chitipati means the 'Lord (pati) of the funeral pyre (chiti)'. According to a Buddhist legend these two figures were once monks that were beheaded by a thief while they were meditating, who later took revenge on this thief by manifesting in the terrifying forms of skeleton spirits. They thus came to be regarded as treasure guardians who protect from thieves. Practitioners of the Chakrasamvara Tantra often invoked them as protectors in the performance of certain wealth rituals, and they also serve as special protectors for Vajrayogini in her form as Naro Khechari or 'Naropa's Dakini'.

As protectors they are particularly associated with the eight great charnel grounds of the Chakrasamvara and Vajrayogini mandalas, which are similarly represented in the protection wheels of many other wrathful or semi-wrathful yidam or tutelary deities. Their Indian liineage stems from Vajradhara, Vajrayogini, Padmavajra, Rahula, Lilavajra, Jnanasiddhi, Matibhadra and Vairocana Rakshita, then into Tibet through Ga Lotsawa and Sachen Kunga Nyingpo. The function of Citipati as protectors is now common to all sarma or 'new translation' schools, especially within the Chakrasamvara and Vajrayogini cycles of the Sakya and Gelugpa Schools.

In Vajrayana Buddhism they are known as the 'Lords of the charnel grounds, brother and sister consorts' (dur khrod bdag po lcam dral ), and in Sanskrit as Smashana-adhipati, meaning the 'Primordial Lords of the charnel grounds'. As the twin protectors of cemeteries they subjugate all the vicious and malevolent demons, ghosts and spirits that can spiritually hinder practitioners, through the power of their tantric activities of pacifying, enriching, subjugating, slaying, exorcising, paralyzing, bewildering, and causing enmity. The skeletal forms of the Brother and Sister are usually depicted with their legs interlocked together in dancing posture, and even thought they are identified as 'brother and sister' they may also be depicted in the incestuous 'father-mother' (yab yum) aspect of sexual union. Within the Gelugpa traditions the 'brother' or father holds the attributes of a skeleton-club and a blood-filled skull-cup in his right and left hands, while the 'sister' or mother usually holds an ear of grain and a golden wealth vase in her corresponding right and left hands. Alternatively they may both hold blood-filled skull-cups in their left hands, with small wealth vases resting within them.

As the masters or heroes of the charnel grounds, the brother-and-sister are generated from the syllables HŪṂ and AṂ, that arise in the symbolic forms of a conch and cowrie shell upon a golden sun-disc, which then transform into the terrifying and radiant white deified forms of dancing skeletons. The brother stands on the right of the sun-disc and lotus in ardha-paryrika or dancing 'bow-and-arrow' posture, with his right leg and foot drawn upward at a sharp angle, and his extended left leg bent at the knee as his foot presses upon the white conch shell from which he is generated. The sister stands on the left of the sun disc in reversed 'bow-and-arrow' posture, with her bent left leg drawn partially upwards, and extended right leg bent at the knee as her foot presses on the white cowrie shell from which she is generated. She is smaller in stature than her brother, and the shapes of the two seashells from which they are generated serve as polarity symbols for the male penis (conch) and the female vagina (cowrie).

The skeletal protectors each have two arms and their white skulls have a haughty expression, with two piercing round red eyes, and gaping mouths that reveals their white teeth, four sharp fangs, and twisting red tongues. With their heads facing each other they gaze directly into each other's eyes, and each wears a golden tiara on the crown of their skull that is adorned with five jewel-topped dry white skulls. Their tiaras are tied with silk ribbons that swirl above their heads, with ends that splay out like fans behind their jawbones. They are adorned with golden bracelets, although only the brother wears a golden earring. And they both wear bodices and loincloths of embroidered silks, along with a belt and a long billowing silk scarf. The brother and sister each hold aloft a white skeleton-club in their right hands, its long shaft fashioned from human vertebrae, and its top crowned with a dry white skull and a jewel. With their left hands they each hold a skull-cup full of blood, the brother holding his skull-cup in front of his heart, and the sister holding hers at the level of her hip. They both abide within a radiant aura of blazing awareness fire, and are described as being surrounded by a retinue of countless worldly and super-mundane dakinis.

The background of this thangka depicts the funereal landscape of their abode in the realm of the dakinis, situated in the western land of Uddiyana, and the skeletal structure of their mansion or mandala palace appears behind the flames of their aura. The vertical beams of its roof are fashioned from human thighbones, with a horizontal frieze of skulls and vertebrae forming the roof beam and guttering below. A grinning skull adorns each end of the roof's guttering, its gable ends are adorned with a skull impaled on a skeletal arm and hand, and on each corner of the roof's golden canopy is a skull pierced by a blazing iron trident. On either side of the main palace roof appear two of the ornate canopies of its four directional gateways. These are similarly fashioned from thighbones, skulls, skeletal arms and legs, with their pinnacles formed from a pyramid of skulls, rib cages, and blazing iron tridents. Below each gateway's lower frieze of skulls are the black beams of its torana or archway, which are decorated with severed heads, crossed thighbones, and flayed human skins. This fearful palace stands at the centre of a great charnel ground and amidst a grove of sandalwood trees.

Crowning the centre of the palace's main roof is the cloud-borne form of the twelve-armed blue yidam deity Chakrasamvara, in union with his red consort Vajravarahi. Here Chakrasamvara is represented in the tradition of the Mahasiddha Luipa, with black Bhairava and red Kalaratri beneath his right and left feet, and both of Vajrayogini's raised legs wrapped around his waist. In the upper left corner is the founder of the Gelugpa tradition, Tsongkhapa (1357-1419), with his two principal disciples, Khedrub Je (right), and Gyaltsab Je (left). In the opposite corner is Machig Labdron (circa 1055-1149), the female instigator of the unique Tibetan chod lineage of practice, which is performed in order to cut through the self-cherishing roots of attachment. Machig's attributes are a damaru or 'chod-drum', a blood-filled skull-cup, and a khatvanga.

Below Citipati's lotus throne is a lotus-filled lake with a central lotus supporting a golden bowl that contains the peaceful offering of the five senses: mirror (sight), cymbals (sound), perfumed-conch (smell), fruit (taste), and a silk ribbon (touch). In the bottom right corner is a group of three skull-cups, the outer skulls containing swirling nectar and blood, and the large central skull containing the wrathful offering of the five torn-out sense organs: eyes, ears, nose, tongue, and heart. The lower landscape depicts scenes and attributes from the great charnel grounds, with a yogin and yogini performing the chod ritual with a damaru and thighbone trumpet; flesh-eating ogres; jackals and vultures devouring various corpses, a naga-serpent, scattered bones and offerings, funeral flames, and a white stupa. In the bottom left corner are a skull-cup containing sense organs, an upturned skull containing a human heart, and a butter-lamp fueled by human fat with a wick made from the twisted hair of a corpse.

The brother may also wear a tiger-skin loincloth instead of a silk skirt, and both may wear brocade 'cloud collars' upon their shoulder blades as upper garments. The couple can also be depicted in the dancing yab-yum aspect of face-to-face sexual union, with the legs of the mother (yum) wrapped around the waist of the father (yab). Occasionally the brother may also be shown wearing a garland of severed heads, while the sister wears a garland of dry white skulls.

Skeleton figures also appear in the monastic Cham dance traditions of Tibet, where the dancers wear skull-masks and skeleton costumes. Animated or dancing skeletons are also frequently depicted amidst the charnel ground scenes of wrathful deity thangkas, where they hold dismembered body parts and terrify human beings. In the Newar tradition these terrifying nocturnal spirits are known as kawa, who appear as male skeletons with erect penises. Their female counterparts are known as khyak, who appear as corpulent, hairy and 'boneless' spirits. These male and female spirits frequently appear in Newar art, where they represent the male and female aspects of bone (semen) and flesh (uterine blood) that engender human conception. And in Tibetan society one's patriarchal or matriarchal descendants are said to belong to either the 'bone-lineage' of the father, or the 'blood-lineage' of the mother.