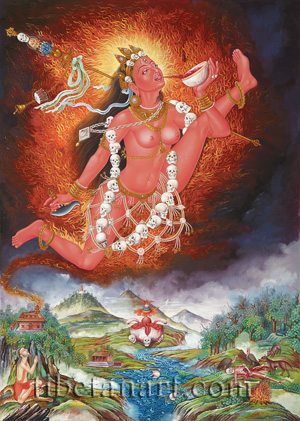 Vidyadhari, the 'Knowledge holder', manifests as one of the four principal aspects of Vajrayogini in the Newar Buddhist tradition, where she is known as Bidjeshwori Yogini. The Bidjeshwori temple in Kathmandu is situated above the western bank of the Vishnumati River on the road to Swayambhu, and its name is derived from Vidhyeshvari, meaning the 'Wisdom Goddess'. At this temple Vajrayogini manifests in her flying or sky-going aspect as the 'knowledge-holder', Vidyadhari. She is specifically associated with the Indian mahasiddha Maitripa, who realized the practice of this aspect of Vajrayogini at this sacred site. She is also known as Maitri-dakini (Skt. maitri-khechari), and more commonly as Akash-yogini, meanin the 'Sky (akasha) or Space-going Yogini'.

An early Tibetan description of Vidyadhari's statue at Bidjeshwori temple describes her as appearing in flying posture, her raised left leg held in the crook of her left arm, her left hand holding aloft her tilted skull-cup and a garland of naga-tree flowers, her right hand holding a vajra above her bent right foot, and her khatvanga resting across her left shoulder. This description also mentions that she is accompanied by the images of her other three Newar representations: Shankhu Vajrayogini, Pharping Vajrayogini, and Guhyeshvari Vajrayogini.

Her long black hair flows freely behind her back, and she is adorned with a golden crown of five jewel-topped white skulls, gold earrings, bracelets, armlets, anklets and finger rings, and a golden necklace, breast ornament and belt. From her golden belt hang the filigree strands of her bone apron, the joined loops of which are embellished with small emblems of the eight auspicious symbols, with the larger pendant near her knee displaying a small painted image of the goddess Vidyadhari herself. Her breast ornament is fashioned as a necklace of strung golden coins, with a central knot and a small reliquary box hanging between her breasts, and a lower strand of little golden bells that circles her chest to join behind her back. A silver Newar 'heart medallion' on a long silver chain swings out towards her right, and around her shoulders she wears a long garland of fifty dry white skulls.

Vidyadhari's face is inclined upward towards the left as she blissfully drinks the stream of fresh blood that pours from the tilted skull-cup that she holds with her left hand. Her drinking of blood symbolizes that she is consumed with great bliss, and her inclined posture of flying towards the left represents the importance placed upon 'left-hand rituals' within the yogini or mother-tantra traditions. With her lowered right hand she circles a vajra-handled curved knife towards the ten directions, annihilating all maras or demonic obstructions; and with her right index finger raised in the tarjani gesture, she threatens all enemies. Across her left shoulder she carries a golden khatvanga staff, which is equal in height to her own body and represents her male consort, Chakrasamavara. The top of her khatvanga is sealed with a golden crossed-vajra and a nectar vase, the impaled blue head of Bhairava, a freshly severed head, a dry white skull, and a crowning half-vajra. A billowing silk ribbon, and a damaru and bell hang from a chain near the top of the khatvanga's shaft.

Vidyadhari is surrounded by a blazing mass of wisdom fire, with its bright yellow tongues of flame forming her halo, and its tapering stream ascending from the golden roof of the Bidjeshwori Temple. The Indian Mahasiddha Maitripa sits upon a tiger-skin mat in the lower left corner, with his palms-folded in adoration as he gazes upward towards the divine form of Vidyadhari. The Vishnumati River flows from the distant and cloud-capped Himalayans, with the peaks of Swayambhu and Nagarjuna Hill appearing in the middle distance. A wrathful skull offering of the five senses floats below Vidyadhari, and a charnel ground scene appears in the lower right corner.