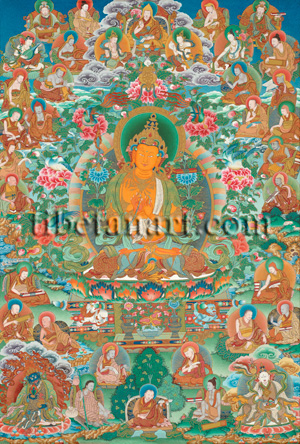 This composition is a copy of a thangka, which I believe was housed in the Potala Palace in Lhasa, Tibet, which shows the wisdom-deity Manjushri surrounded by an assembly of Indian and Tibetan masters of the Sheng-lu or Phonology Traditions. Without their inscribed names, most of these teachers are difficult to identify, but their importance as linguistic scholars of the phonetics of the various Indo-Tibetan languages and dialects must obviously have been of great importance in regard to the accurate transmission of Buddhism throughout Tibet and the Himalayan regions.

Manjushri (Tib. Jampal Yang), or Manjughosha (Tib. Jamyang), is recognized as the principal bodhisattva of wisdom in Mahayana Buddhism, where he appears as one of the eight great bodhisattvas or 'Eight Close Sons'. In Vajrayana Buddhism he is the principal deity of wisdom or discriminating awareness, and one of the 'Lords of the Three Enlightened Families', which represent the Buddha's three qualities of Wisdom (Manjushri), Compassion (Avalokiteshvara), and Power (Vajrapani). The devotional and meditation practices of Manjushri are important in all schools of Indo-Tibetan and Chinese Mahayana Buddhism, as they are designed to overcome ignorance and cultivate insight or discriminating awareness (Skt. prajna) through study, recollection and meditation. One of the most popular practices of Manjushri is the recitation of the 'Litany of the Names of Manjushri' (Manjushrinamasangiti), which is regularly chanted to develop wisdom.

Manjushri's sacred abode is identified with the five-peaked mountain of Wutaishan in China, which is a major pilgrimage site for Chinese and Tibetan Buddhists. A distinctive characteristic of Manjushri is the 'five hair knots' described as being on the crown of his head, which although rarely depicted clearly relate to the five peaks of Wutaishan. Manjushri's two emblems are a fiery wisdom-sword and a text on the Perfection of Wisdom (Skt. Prajnaparamita), which he holds in his right and left hands. These attributes appear as the lotus-borne hand emblems of many important lineage holders, such as: King Trisong Detsen, Sakya Pandita, Tsongkhapa, Longchenpa and Jigme Lingpa. Manjushri is usually described as being youthful, like a young Indian prince or a sixteen-year-old youth (Skt. kumara), and his name as Manjughosha essentially means the 'Gentle-voiced'.

Manjushri appears here in the form of Manjugosha as the 'Lion of Debators', who sits in vajra-posture upon a white moon disc and a multicoloured lotus above an ornate lion-throne. He is beautiful, peaceful, youthful, and orange-yellow in colour like saffron. He wears garments of multicoloured silks with a white sash that loops around his left shoulder, and the precious golden ornaments of earrings, necklaces, a belt, bracelets, armlets and anklets, an ornate golden crown that is decorated with flowers and jewels, and a radiant gem that crowns his topknot. With his two hands held in front of his heart he makes the dharmachakra-mudra of explaining the Dharma, with the thumb and forefinger of each hand holding the stem of a blue utpala lotus. These two lotus flowers blossom with their buds and leaves at the level of his shoulders. His right hand lotus bears an upright vajra-handled and fiery iron sword, which cuts through primordial ignorance and the dissonant mental states to which ignorance gives rise. And his left hand lotus bears a text on the 'Perfection of Wisdom' (Prajnaparamita), symbolizing the knowledge through which enlightenment is attained.

Manjushri's ornate lion-throne is fashioned from jewels and precious metals, with a white and a blue lion guarding the two sides of its façade. In front of the throne's central brocade cloth is small altar-table that bears the offerings of two vases of flowers and a nectar-filled bowl that contains medicinal myrobalan fruits and flowers. Manjushri's radiant blue inner aura is encircled by an outer aura of rainbow-coloured light, and surrounding his aura and green halo is a canopy of leaves, buds and flowers. Amidst this floral profusion are seven large pink flowers, six of which support beautiful birds, while the top flower supports an assembly of the eight auspicious symbols. A parrot stands on each of the two lower flowers, while a duck appears on each of the middle flowers, and a peacock-pheasant on each of the two upper flowers. These birds are symbolic of translation skills, intelligence and spiritual beauty.

Enthroned at the top centre of this composition is the Great Fifth Dalai Lama, Ngawang Lobsang Gyatso (1617-1682), who is flanked by the white god Indra or Sakra, who holds a conch shell; and Pramodyaraja, who has his palms-folded in adoration. To the right of Indra is white Avalokiteshvara, while white Sarasvati appears to the far left playing upon her vina or lute. Appearing amidst the lush landscape of this thangka are twenty-nine teachers or lineage holders of the Sheng lu or Phonology traditions. These Indian and Tibetan scholars are divided into two groups of nine along the upper sides and corners, two groups of three on the lower sides, with a further group of five at the bottom centre. Many of these scholars hold long scriptural texts in their hands, while a few are inscribing texts or reading from them. Most of these figures are enthroned upon cushions and wear the monastic robes and red or yellow hats of Indian and Tibetan pundits, teachers and translators. The two scholars in the upper corners wear the robes and turbans of Buddhist kings, with the one on the right probably being Indrabhuti ot Songtsen Gampo, and the one on the right being Tonmi Sambhota, who originally developed the scripts for the Tibetan alphabet, based upon the classical Devanagri scripts he had studied in India. The two Sheng-lu pandits near the bottom centre appear in the guise of yogins or siddhas, while a pandit in the mid-right points to a text he reads while wearing Tibetan spectacles made from dark crystal.

Seated in the bottom left corner is the wrathful yaksha protector Shanglon Vajra-mara-dama (Tib. gNod-sbyin Zhang-lon rDo-rje bdud-'dul), the 'Vajra Demon-subduer'. Shanglon appears here in his 'outer accomplishment' aspect as a wealth deity who also serves as a special protector for the Tibetan Medical Tradition. He is black in colour and fierce, with three round red eyes, bared fangs, a twisting tongue, and upward-blazing facial hair. He sits in the lalita posture of royal-ease upon a corpse, a golden sun disc and lotus, and his radiant aura is encircled by a mass of fire. His curly brown hair is piled up above his jeweled crown, and he wears jewel ornaments, garments of multicoloured silk, an outer cloak of embroidered green-black silk, and leather boots. With his right hand he holds a precious eight-faceted gem, and with his left hand he holds a jewel-filled golden vase with a branch of red coral at its top.

Seated in the bottom right corner is the female dharmapala Ekamatri Shri Devi (Tib. Ma-gcig dPal lha-mo), the 'Sole Mother, Glorious Goddess', who appears as a mild and auspicious manifestation of the great Tibetan goddess and protector, Shri Devi (Tib. Palden Lhamo). Ekamatri is slightly wrathful and white in colour, with three piercing eyes, and she sits in a posture of royal-ease upon a white moon disc and a lotus. Her black hair is piled up into a topknot above her five-jeweled crown, and she wears jeweled ornaments, garments of multicoloured silks, felt boots, an outer robe of embroidered white silk, and a silver divination mirror adorns her breast. With her right hand she holds the shaft of an auspicious long-life arrow, with a silver divination mirror and silk ribbons of five colours fastened to its top. And with her left hand she holds a golden bowl that contains precious jewels and elephant tusks.