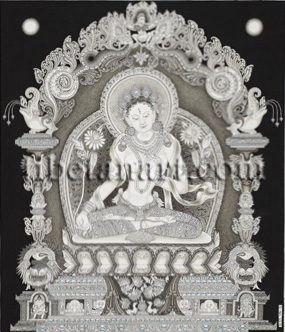 This delicate black and white painting of White Saptalocana Tara has been innovatively rendered in the style of an early 13th century Newar or Pala-style painting from Eastern India. The palette used in this essentially monochrome painting employs a minimal use of blue, red and sepia pigments that mainly appear on Tara's jewel ornaments and throne.

White Tara (Skt. Sita Tara: Tib. Drol-kar) is the long-life aspect of Tara, the 'Saviouress', who is the well-known Buddhist goddess of mercy and compassion. In her white longevity aspect she is also known as Saptalocana Tara, or 'Seven-eyed' Tara, and is an important yidam or meditational deity in her own right. As one of the three principal Buddhist longevity deities White Tara also frequently appears in a long-life trinity with Amitayus and Ushnishavijaya. Her meditational practices are mainly employed to confer long-life, alleviate illnesses, and to remove the obstacles that are indicative of an untimely death. Thangkas of White Tara and the 'Trinity of Long-Life Deities' are frequently commissioned for such purposes, or to auger an auspicious rebirth for a deceased relative or friend.

White Tara is beautiful, peaceful, and youthful like a sixteen-year-old, with full breasts, aroused nipples, a narrow waist, and a sweetly smiling face. Her complexion is radiantly white like a full autumnal moon, and she sits in vajra-posture upon a white moon disc that rest upon the seed-head of a lotus with double-petals above an ornate throne. She is adorned with seven bow-shaped eyes, with the three eyes of her face representing the perfection of her body, speech and mind, and the four eyes in her palms and soles representing the 'Four Immeasurables' of her boundless compassion, loving kindness, sympathetic joy, and perfect equanimity. With her lowered right hand she makes the boon-granting varada-mudra of supreme generosity, whilst holding the stem of a stylized lotus. And with her left hand she makes the abhaya-mudra of protection or granting refuge, whilst holding the stem of a similar lotus in front of her heart. Both of these lotuses blossom at the level of her shoulders with an open blossom of many petals, a bud, and folded leaves.

As garments Tara wears a long silk scarf that curves around her upper body and arms, and tight silk trousers that are intricately decorated with patterned sections of floral, scrolling and zigzag designs, and rows of roundels that encircle the minute images of swans, deer and elephants. A floral apron hangs down from her silken belt, which is gathered together at her sides and decorated with jeweled emblems and hanging beads. Her dark hair curls gracefully over her forehead and falls in ringlets behind her ears and shoulders, while the ends of the silk ribbons that bind her tiara or crown cascade over her shoulders like palm-leaf fronds. Small ornamental peacocks stand on the floral jewels above her ears, with five ornately mounted jeweled emblems forming the headband of her tiara. Little strings of jewels loop between each of these five emblems, which themselves are fashioned from all kinds of precious stones. Her earrings, necklaces, bracelets, armlets and anklets are all likewise finely fashioned from jewels and precious metals; with peacock emblems on her jeweled armlets, and with multiple strands of jewels, pearls, gold and silver beads appearing on her necklaces and bracelets.

Tara's inner aura is decorated with the traditional scrolling roundels of early Newar art, while her outer aura and the rim of her halo are decorated with arabesque foliage and vine-like motifs. The horizontal steps of the throne upon which her lotus seat rests are decorated with jeweled scrolls, pearl and lotus designs, with an upper frieze of roundels that encircle the small images of deer, swans, elephants and two lotuses. The symmetrical façade of her throne's panels reveal the heads and feet of stylized elephants and lions, with inner pillars that depict offering goddesses being supported by small figures, and outer pillars that show elephants with mythical sharabhas (lion-deer) standing upon their backs with lotus flowers above. The draped silk cloth at the centre of her throne is decorated with flowers on its interior, with the Buddhist emblem of two deer flanking a wheel of dharma at the bottom centre. Behind the throne is the shrine-like base of Tara's torana or 'enlightenment archway', which enshrines the small image of two-armed Ganapati on the right, and two-armed Mahakala-Bhairava on the left. The arabesque pillars that arise from each of these two shrines are ornamented with a treasure vase, a pair of fishes, a conch-shell and floral lotus-frond, and a stacked assembly of stylized architectural, scrolling leaf and floral components that terminate in a stepped capital. Upon each capital stands a ferocious makara or 'crocodile', with a fabulous scrolling feather-like tail, and three strands of jewels that cascade from its open jaws. Crowning Tara's torana is a garuda with outstretched wings and arms, whose feet press upon a male naga (left) and a female nagini (right) that stride outwards with a crest of five naga-serpents crowning their heads, and their massive serpentine lower bodies extending behind them from their five-hooded crowns to the tails of the makaras. An arabesque floral canopy forms the upper frieze of Tara's torana, with the discs of the moon and sun appearing in the blackness of space behind her divine form.