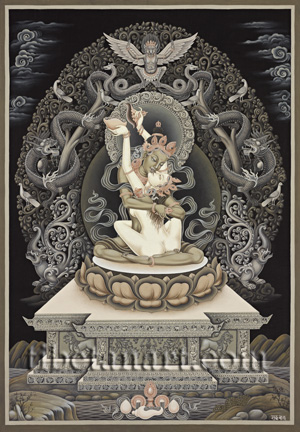 This sepia composition depicts the 'Primordial Buddha' Vajradhara in union with his consort, Vajrayogini, which is the dharmakaya form that the 'Precious Guru', Guru Rinpoche or Padmasambhava, assumed when he received the Mahayoga teachings directly from Vajrasattva. In this form Padmasambhava appears as Urgyen Dorje Chang in union with his white consort, Yeshe Tsogyal, as one of the Guru's eight manifestations (Tib. Guru Tsengye). These eight different aspects relate to eight specific events that occurred during different periods of Padmasambhava's life as an exceptionally skilful teacher and tantric practitioner.

Vajradhara's deep blue colour represents his unchangeable and space-like nature as the pure expression of the dharmakaya. His peaceful form is endowed with the thirty-two major and eighty minor marks of a fully enlightened Buddha, and he wears the divine silk and jewel ornaments of a sambhogakaya deity. He sits with his legs loosely crossed in lotus-posture upon a white moon disc and a lotus above an ornate throne, with a long silk scarf billowing about his naked body and his loincloth loosened for sexual intercourse. He wears golden bracelets, armlets and anklets, a heavy golden neck choker, jeweled earrings, a five-jeweled crown, and a golden half-vajra that crowns his topknot. With his right arm crossed over his left arm in vajra-humkara-mudra he embraces his consort while holding a golden vajra and an upturned bell in his right and left hands. These two attributes represent the union of his method or skilful-means (vajra) and wisdom (bell).

Vajrayogini, as his white consort Yeshe Tsogyal, sits with her legs wrapped around Vajradhara's waist as she presses every part of her naked body against his in the bliss of sexual union. She is adorned with the golden ornaments of a five-jeweled crown, earrings, bracelets, armlets and anklets. Her long hair flows freely down her back as she gazes into the eyes of Vajradhara, with her lips held close to his. With her raised arms she embraces his neck whilst holding aloft a skull-cup full of blood in her left hand, and the vajra-handled curved knife of the dakinis with her right hand.

The lower steps of Vajradhara's magnificent lion-throne are embellished with scrolls and lotus motifs, and its top step is decorated with roundels that contain small emblems of deer, swans, elephants and lions. At the centre of the throne's main façade is a tripod bearing the eight auspicious symbols, with leaves of the wish-granting vine on each side, and two offering goddesses appearing on the inner pillars. Two lions guard each of the four sides of his throne, which collectively represent the eight great bodhisattvas. And on the throne's outer pillars appear the gaja-simha emblems of an elephant, lion and lotus. In front of the throne are the sense offerings of a mirror (sight), cymbals (sound), a conch-shell full of perfume (smell), silk ribbons (touch), and two jewel-like fruits (taste). In the lower landscape behind these offerings is a lake, with rock formations and hills in the background.

Behind Vajradhara's dark aura and ornate halo appears the symmetrical backdrop of his enlightenment throne or torana. This is fashioned as a scrolling frieze formed from the swirling tails of two fierce makaras or 'water-monsters' that merge with the canopies of two wish-granting trees. The paws of the makaras rest upon dark clouds, and the symmetrical trunks of the trees are entwined with two jewel-grasping dragons. Four birds perch upon the stylized, scrolling branches of the trees, and the top of the torana is crowned by the squatting form of Garuda, who grasps the tails of two naga-serpents with his sharp talons.