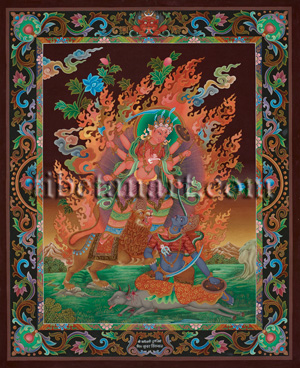 This painting of the great goddess Durga as Mahishasura-mardini, the 'Slayer of the Buffalo Demon'. Durga, meaning the 'Invincible or Inaccessible', appears here in her victorious eight-armed (Skt. astabhuja) aspect as she stands leaning towards the left in alidha posture, with her extended right foot resting upon the silk saddle blanket of her pouncing lion, and her left foot pressing upon the shoulder of the 'buffalo demon' Mahishasura. Durga is light red in colour and semi-wrathful in appearance, with three piercing eyes, and a haughty smile that reveals her sharp white teeth. She is adorned with divine garments of multicoloured silks and the golden ornaments of bracelets, armlets and anklets; earrings; two necklaces, and a jewel-topped five-skull crown that is adorned with silver kikinpa blades and little hanging loops of bone beads. Half of her hair is piled up into a topknot, with the other half hanging freely about her shoulders. Her radiant inner aura and halo are encircled by a blazing mass of colourful flames and swirling clouds, with flowers and leaves appearing behind.

With her first pair of right and left hands Durga makes the bindu-kapala-mudra in front of her heart, with her right hand making the abhaya-mudra of protection above the skull-cup of swirling nectar that she holds in front of her heart. With her lower pair of extended right and left hands she holds a trident that pierces Mahishasura's heart, and the long noose of a poisonous naga-serpent with which she has ensnared Mahishasura's upper body. With her middle pair of extended right and left hands she holds an axe and a spear; and with her third pair of extended hands she holds an iron sword or scimitar, and a shield. And with her three extended left hands she holds a serpent-noose that binds Mahishasura. The subjugated human form of the blue asura demon Mahishasura crouches upon the bleeding body of the slain buffalo-demon from which he has just emerged, with his drawn sword and shield resting meekly across his legs. The background landscape shows the plain where the legendary battle between Durga and Mahishasura took place, which is framed by the brocade-patterned inner torana of this composition. The painting's dark outer torana is ornamented with scrolling lotus, leaf and jewel motifs, with the crowning serpent-devouring face of Chepu or kirtimukha appearing at the top. The white inscription at the bottom centre gives the deity invocation, Shri Adi Shakti Durga Devi, meaning the 'Glorious Primordial Energy of the Goddess Durga', with the artist's name, Sundar Sinkhwal, beneath. This painting by Sundar Sinkhwal is based upon an original composition by Siddhimuni Shakya (1932-2001).

The legend of this epic battle is described in the Sanskrit text of the Devi Mahatmya, or 'Glory of the Goddess', which was composed by the Rishi Markandeya around 450 AD. After performing great penances Mahishasura, the 'Buffalo Demon', received a boon from Lord Brahma that no man could ever slay him, only a woman. With this boon of near-immortality Mahishasura assembled a powerful army of asura demons and waged war on Indra and his heavenly army, which he succeeded in conquering. The vanquished gods then sought the help of Brahma, Vishnu and Shiva, who took counsel together and from their great wrath emanated fiery rays of light that coalesced into the form of a woman with many arms, a fair complexion, and black hair. Then from the bodies of Indra and all the other gods emerged a great mass of fiery energy that united into this divine feminine form, transforming her into the Great Goddess Durga. Her mouth was born from Shiva's energy, her hair from Yama's energy, and her arms from Vishnu. Her breasts were born from Chandra - the Moon, her waist from Indra, her calves and thighs from Varuna, and her genitals from Shakti. From Brahma came her feet, from Surya - the Sun, her toes, from the eight Vasus' came her fingers and hands, from Kubera came her nostrils, and from Prajapati her teeth. Her three eyes came from the energy of Fire or Tejas, her eyebrows from the two Twilights, and her ears from the energy of Wind or Vayu.

When the immortals, who were tormented by Mahishasura, saw the divine form of this Great Goddess manifesting from the energy of all the gods combined, they rejoiced aloud, crying: “Victory! Victory!” Then Shiva manifested a trident for her, while Vishnu bestowed a discus, Varuna a conch, Agni a spear, the Wind a bow and two quivers full of arrows, Indra a thunderbolt, Airavata a bell, Yama a club, Varuna a noose, Prajapati a rosary, and Brahma a water-pot. Her silken garments and jewel ornaments arose from the milk-ocean, her armour and axe came from Vishvakarman, her lion-vehicle came from Himavat, her lotuses came from the ocean, her jewels and flask of alcohol came from Kubera, and her garland of snakes came from the great Naga King, Sesha.

When Mahishasura beheld Durga's radiant form on the battlefield he fell in love with her at first sight, and enthralled at her beauty instantly proposed marriage to her. Durga agreed, but only on the condition that he must first defeat her in battle. Attired in all her glory Durga's great wrath caused the three worlds to shake, as Mahishasura commanded his uncountable armies of cloned demons to attack the Great Mother Goddess, who also bore the name of Chandika or Ambika. But whatever weapons the demons assailed her with Durga destroyed them all by the hundred, cleaving them asunder until the battlefield was awash with blood, broken chariots, headless corpses and the dismembered bodies of millions of asura demons, horses and elephants.

Consumed with fury after witnessing the destruction of his army, Mahisha assumed his mighty buffalo form and attacked the army of the gods, casting them hither and sunder with his sharp horns, his bristling tail, and the snorting fire of his breath. Mahisha the buffalo then pounced upon Durga's lion, but when Durga snared the buffalo's neck with her serpent-noose he quickly changed his form into a leaping lion. With a stroke of her sword Durga cut off the head of this lion, and from its body emerged the form of a man, which Durga again cut down with a hail of arrows. However, the man's body now transformed into that of a mighty elephant, which began to drag Durga's lion along with its trunk, until Durga severed its trunk with her sword. Then Mahisha assumed his gigantic buffalo form again and arrogantly began to uproot mountains and cast them at Durga with his horns, which the goddess shattered into fragments with her arrows. Finally Durga drank the liquor from her flask and chided Mahishasura by saying: “Roar and bellow you arrogant fool, but when I stop drinking you will face me alone. Your entire army, relatives and friends are no more, and in a few moments the gods will cry out in jubilation when you are slain by my hands.”

Then Durga pounced on the buffalo, pinning him to the ground with her foot and piercing his body with her spear, until finally Mahishasura emerged in human form from the mouth of the slain buffalo. Whereupon Durga pierced his heart with her trident and severed his head with her sword. Only then did all living creatures in the three worlds proclaim the word “Victory!” at the triumph of their Great Goddess who had restored peace and balance to the universe once more.

Durga then assumed the name of Mahishasura-mardini, the 'Slayer of the Buffalo Demon, and her epic battle against Mahisha and his asura armies took nine nights to fulfil, with victory coming on the tenth day. This period came to be known as Navaratri, meaning 'Nine Nights', with the tenth day of final victory being known as Vijayadashami, meaning the 'Victorious Tenth'. To commemorate this epic event the great annual Indian festival known as Durga Puja is celebrated in late autumn, where each of the Navadurga, or 'Nine Manifestations' of Durga are worshipped sequentially. These are:

(1) Shailaputri, the 'daughter (putri) of the rocks (shaila) or mountain'.
(2) Brahmacharini, the 'practitioner of austerities'.
(3) Chandraghanta, the 'moon-bell'.
(4) Kushmanda, meaning 'the gourd'.
(5) Skandamata, the 'mother of Skanda'.
(6) Katyayani, the 'daughter of Katyayana'.
(7) Kalaratri, the 'dark night'.
(8) Mahagauri, the 'great white one'.
(9) Siddhidatri or Siddhidayini, the 'granter of accomplishments (siddhi)'.