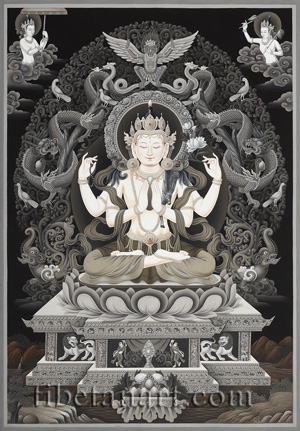 In this beautiful black and white painting by Shuka Raj Tamang, Avalokiteshvara is shown in his four-armed form, or 'Six-syllable' (Skt. sadaksari) aspect, which relates to his famous six-syllable mantra: OM MA-NI PA-DME-HUM.

Lokeshvara sits gracefully in vajra-posture upon a white moon disc, an open lotus, and a jeweled throne. As the embodiment of great compassion he is radiant and white like an autumnal moon, and adorned with the five divine silks, the eight jewel ornaments, and a deerskin that is traditionally draped over his left shoulder. Half of his hair is piled up into a topknot, while the other half hangs freely about his shoulders. His four arms represent the 'four immeasurables' of love, compassion, joy and equanimity. With his two principal hands palms-folded in front of his heart he cups a wish-granting gem to represent his loving kindness and compassion. With his second left hand he holds an immaculate white lotus, which represents his sympathetic joy for the happiness of others. And with his second right hand he counts a rosary of equal-sized crystal beads, which represents his perfect equanimity. He is extremely beautiful and peaceful, and his sweetly smiling face is encircled by a halo of scrolling jewels and pearls.

The lower steps of Lokeshvara's magnificent throne are embellished with scrolls and lotus motifs, and its top step is decorated with roundels that contain small emblems of deer, swans and lions. At the centre of the throne's main façade is a mirror, with two goddesses holding flower garlands standing at either side of it, while two other offering goddesses appear on its corner pillars. A pair of roaring lions guards each of the four sides of his throne, which collectively represent the eight great bodhisattvas. And on the throne's outer pillars appear the gaja-simha emblems of an elephant, lion and lotus. In front of the throne is a bowl of jewels with two lotus buds curving over it.

Lokeshvara's torana is fashioned as a scrolling frieze formed from the swirling tails of two makaras that merge with the canopies of two wish-granting trees, the symmetrical trunks of which are entwined with two jewel-grasping dragons. Several birds are shown perched upon the stylized branches of these trees, and the top of the torana is crowned by the image of Garuda, who grasps a pair of naga-serpents with his sharp talons. In the upper corners of this painting appears a cloud-borne goddess who holds a parasol, and a cloud-borne god who fans Lokeshvara with a pair of flywhisks.