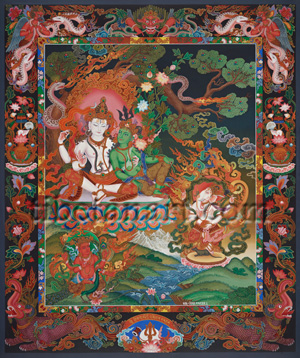 The image of Shiva-Shakti, where Siva and Parvati appear together as husband and wife is popular in both Indian and Newar art. But they are also represented together with their two miraculously created 'sons', Ganesha and Kumara, in a 'divine family' assembly known as Shiva Parivar or 'Shiva's Family'. In Indian 'calendar art' they often appear in the photogenic form of a 'family portrait', with Shiva and Parvati sitting or standing next to each other like husband and wife, and the small child-like forms of Ganesha and Kumara either standing or sitting upon their laps like babies. As family portraits these composition are usually quite formal, with all four members gazing serenely forward as if they were posing for a family photograph. Traditionally Shiva is portrayed with his right hand raised in benediction, with their animal vehicles (bull, lion, rat and peacock) sitting peacefully near their feet, and a panorama of Himalayan peaks or a magnificent throne appearing in the background.

However, in Newar art the Shiva Parivar assembly assumes a more dynamic and explicit pictorial resonance, where Shiva doesn't appear as a respectable householder and husband, but as a wild and youthful ascetic who tenderly fondles the breast of Parvati with his left hand. Similarly Parvati doesn't assume the guise of an obedient housewife and devoted mother, who conceals her femininity and matrimonial fidelity behind a silk sari. Instead she appears as a beautiful, nubile and scantily clad Indian princess, who exalts in her own wild individuality with an abandon equal to that of Shiva. Likewise Ganesh and Kumara are not vulnerable infants who cleave to their mother's breasts, or their omniscient father's lap, for neither of them was conceived in Parvati's womb. They choose instead to stand apart as born-leaders, who are free to dance triumphantly within a mass of fire, or to lead the army of the gods into battle.

For there is little that is conventional about the family of Shiva, whose first wife (Sati) immolated herself before the pieces of her dismembered body were scattered all over India. Sati was then reborn as Uma or Parvati, who had to cultivate great devotion and purity before she could regain the hand of Shiva once more. Their first son, Ganesha, was created from the scurf of Parvati's body, but Shiva then beheaded him soon after Parvati gave him life. And their second son Kumara (Skanda) was conceived from a misplaced 'spurt' (skanda) of Shiva's semen, which fell into the mouth of the fire-god Agni, who then disgorged into the River Ganges, upon whose bank he was then found and breast-fed by six wives of the great Rishi's or sages.

This intricate painting shows Shiva and Parvati seated together upon their wide silver moon disc and multicoloured lotus, with Ganapati and Kumara appearing below. Shiva is bluish-white in colour with an austere expression, three bow-shaped eyes, four arms, and he sits in a posture of royal-ease with his legs loosely crossed. His lower body is adorned with embroidered silk trousers and a loosened tiger-skin loincloth, with a long billowing scarf of embroidered red silk encircling his upper body. He wears golden ornaments and a serpent loops around his chest as a sacred thread. Shiva's forehead is marked with the three horizontal vermilion lines of his tripundra, his left earring is a jewel mounted in gold, his right earring is a coiled serpent, and his golden crown is studded with radiant gems. Some of Shiva's long matted hair-locks flow freely about his shoulders, while others are coiled up into a large topknot that is crowned by a jewel and adorned with a white crescent moon. With his first right hand Shiva makes the abhaya-mudra of protection as he holds an oval stone lingam in front of his breast, and with his second right hand he holds aloft a golden rosary. With his first left hand Shiva embraces Parvati as he fondles her left breast, and with his second left hand (not visible) he holds his trident and damaru or pellet-drum behind Parvati's body, with the tip of the trident appearing just above Parvati's crown.

Parvati is beautiful and emerald green in colour, with firm breasts, two lotus-like eyes that gaze upon her lord, and she leans against Shiva in a posture of royal-ease. Her right hand rests upon Shiva's left knee, while her left hand rests upon her own left knee as she holds the stem of a pink lotus that blossoms near her ear. Parvati wears embroidered red silk trousers and a long scarf of blue and green silk, one end of which billows outwards to her left. She is adorned with golden ornaments, an ornate jewelled crown, and a sash of filigree bone that circles beneath her breasts and across her left shoulder. Half of her long black hair hangs freely about her shoulders, while the other half is bound up into a topknot and sealed with a golden jewelled pendant. The radiant blue auras of Shiva and Parvati merge together, as does the fiery orange halo that encompasses both of their heads.

To the right below is elephant-headed white Ganesha or Ganapati, who dances in 'bow-and-arrow' posture upon his long-nosed shrew, golden sun disc and pink lotus pedestal. Ganapati has four arms and three piercing eyes, and he is adorned with divine silk garments, a tiger-skin loincloth, golden ornaments, and a jewelled crown. Ganapati gazes up towards his parents, his sharp tusk in profile, his trunk marked with an auspicious design as he curls it towards his mouth to swallow the Indian laddu sweet at its tip. With his first right hand he makes the bindu-mudra in front of his heart, while his second right hand holds aloft a golden rosary. With his first left hand he holds a golden bowl full of his favourite laddu sweets, and with his second left hand he holds aloft a sharp axe. Ganapati is surrounded with a blazing mass of fire, in front of which his long green silk scarf billows and twists gracefully about his body.

Below Shiva is four-armed red Kumara, who sits in 'bow-and-arrow' posture upon his peacock vehicle, with his left foot resting upon a small lotus pedestal, the long stem of which extends into the water at the bottom centre. In Newar art Kumara appears with a youthful well-built body, a potbelly, sturdy limbs, a beautiful face and two almond-shaped eyes. He is adorned with divine silks, jewel and filigree bone ornaments, a five-jewelled crown with two victory flags, and he abides within a blazing mass of wisdom fire. With his first right hand he makes the bindu-mudra in front of his breast as he holds a small stone lingam, and with his second right hand he holds a golden rosary. With his first left hand he holds a golden water flask with a pouring spout, and with his second left hand he holds aloft a golden staff with a peacock feather at its top. Kumara, the 'eternal youth', is also known as Karttikeya or Skanda, and is very popular in South India, where he commonly appears in his six-headed form as the commander of the gods armies in their enduring war against the demons or asuras.
The beautiful landscape within which this divinely powerful family abide consists of gentle hills, foliage and flowing water, with snow-capped mountain peaks in the far distance. From behind Shiva emerges the trunk of a large tree that arches across the dark upper sky with the leaf-clusters of its canopy bearing radiant 'triple-gem' fruits. The great nagaraja or 'serpent-king' Sesha coils around the trunk of this tree, with a blazing naga-jewel on the crown of its head, fire emanating from its tail, and a stream of fire blazing forth from its fanged mouth. Colourful clouds swirl and billow in the upper sky, while a graceful lotus-bearing vine ascends behind Parvati's head.

The narrow inner border or torana that frames the landscape is decorated with colourful sections of floral, geometric and flame designs that resemble brocade patterns. The painting's elaborate dark outer torana is crowned with the fierce head of Chepu or kirtimukha, the 'face of glory', who bites on the tails of two naga-serpents with his sharp fangs. In the upper corners are the symmetrical forms of two red garudas, each of which hold the tails of two coiling, fiery and great naga-serpents around their necks as garlands. Each garuda has two piercing eyes, a sharp beak, blue wings, gold and bone ornaments, and a tiara crowned with a golden crescent and a radiant gem. In the lower corners are two fierce red makaras or 'water-dragons', with swirling feather-like tails, two piercing eyes, sharp teeth, a gaping mouth, and a long snout. Coiling around each makara's snout is a stylized stem of lotus tendrils that culminates in a leafy open lotus and silver moon disc. Upon each moon disc is a stylized and curving frame or crest of leaves, jewels and lotuses that support the 'eight auspicious symbols' of the Newar tradition, these are: the pair of fishes, treasure vase, lotus, white conch, fly-whisk, banner, parasol, and golden wheel. At the bottom centre is the emblem of Parvati's lotus supporting Shiva's twin attributes of a chained damaru and a trident, the shaft of which is adorned with a billowing silk ribbon. Behind the trident is the white disc of the full moon against a sky-blue background, and on either side of the pink lotus is a golden crest-bar and clouds. Inscribed in gold Ranjana characters upon the curved red banner above is the deity invocation: Shri Shivaya Shakti Parivar Sat Nama. And in the white Ranjana characters inscribed on the landscape's lower right is the artist's name, Dinesh Charan Shrestha, who took around four months to create this wonderful Newar paubha or painting.