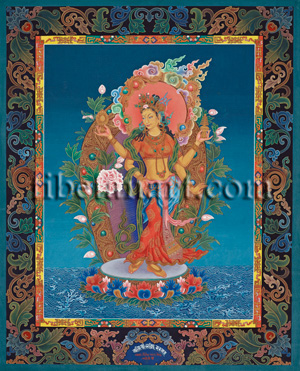 Lakshmi is the Hindu Goddess of wealth, prosperity, beauty and good fortune, who arose during the legendary 'churning of the ocean', when she was taken as a wife by Lord Vishnu. As Vishnu's consort she is also known as 'Shri', the 'Auspicious One', who incarnated in the forms of Sita and Rama as the wives of Rama and Krishna, Vishnu's seventh and eighth incarnations. The Ramayana epic tells how Sita was first abducted by the demon king Ravana, and then rescued by her husband Rama and his brother Lakshman. As Sita, Rama and Lakshman were returning home triumphantly people lit lamps to illuminate their way, and this legend gave rise to Diwali, the Hindu 'Festival of Light' in autumn, where the auspicious goddess Lakshmi is worshipped.

Mahadevi, the 'Great Goddess', manifests in three principal aspects in the Hindu tradition: in her fierce destructive aspect she in Durga, in her peaceful wisdom aspect she is Sarasvati, and in her beautiful auspicious aspect she is Lakshmi. Lakshmi also has eight different forms (Skt. astalakshmi):

As Gaja Lakshmi, or 'Elephant Lakshmi', she is also worshipped as Kamala, one of the Ten Mahavidya Goddesses. Kamala is beautiful and golden in colour with four arms, and sits upon a lotus being bather by either two or four elephants. In her most common Hindu form Lakshmi is shown either sitting or standing upon a lotus above a lake, with her two upper hands each holding a red lotus (kamala), and her two lower hands making the varada-mudra of supreme generosity, and the abhaya-mudra of protection or giving refuge. She may also hold a wealth or treasure-vase in one of her lower hands, from which she pours a stream of golden coins or jewels; while from the open palm of her other lower hand a stream of golden coins miraculously cascades.

In her Tantric form Lakshmi appears as Mahalakshmi or Shri – the great Mahavidya or 'Knowledge-Holding' goddess, Kamala. In the Lakshmi Tantra the goddess Shri states: “I am Narayani, possessed of eternity, flawless, infinite, boundless with beneficial attributes. In truth I am Vishnu's 'Supreme Being'. I am beyond the limitations of space, time or form. Consciousness alone is the essence of my being.”

Lakshmi is one of the earliest deity's to appear in Indian Art, and two stone relief images of Gaja Lakshmi being bathed by elephants are sculpted upon the east gateway of the great Buddhist Stupa at Sanchi (c. 100 BCE). In Buddhism Mahalakshmi (Tib. dpal chen-mo) may appear in the form of the wealth goddess Sri Devi, who is slightly wrathful, three-eyed, white in colour, adorned with all manner of silk garments and jewel ornaments, and she holds a divination arrow in her right hand, and a bowl of jewels in her left hand. In the Newar Buddhist tradition Lakshmi is often identified with the golden-yellow forms of the wealth goddess Vasundhara, who is also a well-known goddess in the Indo-Tibetan Buddhist tradition.

In this painting By Dinesh Charan Shrestha Lakshmi stands gracefully upon a silver moon disc and a multicoloured lotus that floats above the turbulent water of a lake. She is peaceful and beautiful, golden-yellow in complexion, with four arms and two lotus-like eyes that gaze towards her right. As silk garments she wears an orange-red bodice that conceals her full breasts, a flowing orange-red underskirt, a blue upper-skirt, a long billowing green silk scarf, and a flowing silk belt. From her belt hang jewel-loops and a richly embroidered apron or valance (Newar: jabhin), which is adorned with the auspicious symbols of a treasure-vase, a lotus, a conch, and a parasol. As golden ornaments she wears jeweled earrings, bracelets and anklets, three jeweled necklaces, and a five-jewel crown that is adorned with flowers and silk ribbons. Half of her long black hair is bound into a topknot, while the other half hangs freely about her shoulders, and her pink halo is embellished with jewel-studded golden scrolls, and colourful clouds with flame-like tips.

Lakshmi's four arms represent fulfillment of the four Vedic goals of life: sensual love (kama), prosperity and status (artha), righteousness (dharma), and liberation (moksha). With her first right hand Lakshmi makes the open-palmed varada-mudra of supreme generosity and granting boons, and with her second left hand she makes the abhaya-mudra of protection. With her other two raised hands Lakshmi holds the traditional Newar attributes of feminine auspiciousness; the golden mirror or darpana that the holds in her second right hand, and the ornate golden vermilion-powder container or sinhamu that she holds in second left hand.

The light rays of Lakshmi's inner aura are enclosed by the jewel-studded scrolls of her golden outer aura, which is encircled by a profusion of leaves, pink buds, and a large open lotus. The colourful inner torana of this painting is decorated with brocade patterns, and the outer torana is composed of floral scrolls, with the deity invocation at the bottom centre.