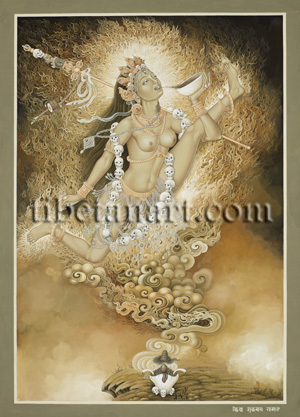 Vidyadhari, the 'Knowledge Holder', manifests as one of the four principal aspects of Vajrayogini in the Newar Buddhist tradition, where she is commonly known as Bidjeshwori Devi, or Akash-yogini, the 'Sky (Skt. akasha) or Space-going' aspect of the goddess Vajrayogini. The Bijeshwori temple in Kathmandu is situated above the western bank of the Vishnumati River on the road to Swayambhu, and its Newar name is derived from Vidhyeshvari, meaning the 'Wisdom Goddess'. The presiding goddess of this temple is specifically associated with the Indian Mahasiddha Maitripa, who practiced and attained the realization of this flying aspect of Vajrayogini at this site, so she is also known as Maitri-dakini, or Maitri-khechari.

The temple of Bahal Bidjeshwori was once at the centre of a great cremation ground that was sacred to Vajravarahi, and its main image was Bhagavani Devi Vidyadhari Viramante, the 'Divine Pleasure-giving Knowledge Holder Goddess'. She is the heart-dakini of Maitripa, who brought this symbol of his realization from India. On the right side of the goddess is Urdhvapada Varahi, with her left leg extended high in the sky to Brahmaloka, and her other foot pressing down upon a golden Maheshvara. On her left side is Vajravarahi (Tib. Dorje Palmo), and then the twelve-year-old virgin form of Vajrayogini as Naropa's Dakini (Skt. Naro Khechari) or Chakreshvari, the consort of Chakrasamvara.

Vidyadhari Vajrayogini is beautiful, playful and lusty, and youthful like a sixteen-year-old. She is the colour of a red hibiscus flower, with three lotus-like eyes, and an expression that combines the sentiments of passion and slight wrath. She is shown leaping into space in the flying posture of a 'sky-going' dakini, with her right leg bent back at the knee, and her right leg extended in 'raised foot' (Skt. urdhvapada) posture and held in the crook of her left arm, such that her thighs are fully splayed. Her nubile body is perfect in proportion, with a narrow waist, and firm round breast with aroused nipples.

Her long tresses of black hair flow freely behind her back, and her head is adorned with a golden crown of five jewel-topped and carved white skulls, with loops of bone beads hanging beneath below each little skull. She wears the golden ornaments of jeweled earrings, a heavy neck choker decorated with the serpent-devouring head of a garuda, wide Newar bracelets, armlets, anklets, and finger rings. A golden breast ornament loops around her chest, with small coins hanging from its upper thread, little round bells from its lower thread, with a small endless knot and reliquary box (Tib. gau) joining the threads together between her breasts. From her golden belt hang the sixty-four filigree beaded strands of her bone apron, the joined loops of which are embellished with pendant-emblems of auspicious symbols and swans, with the large pendant near her right knee displaying a small carved image of the goddess Vidyadhari herself. An embellished Newar medallion on a long silver chain swings out behind her neck, and around her shoulders she wears a long garland of dry white skulls that are described as being fifty in number.

Vidyadhari's face is inclined upward to her left as she drinks a stream of fresh blood from the tilted skull-cup she holds in her left hand. Her drinking of blood symbolizes that she is consumed with great bliss, and her inclined posture of flying towards the left represents the importance placed upon 'left-hand rituals' within the yogini or mother-tantra traditions. With her lowered right hand she circles a vajra-handled curved knife towards the ten directions, with her index finger raised in the threatening tarjani gesture, symbolizing that she terrorizes all obstructive demons. Across her left shoulder she carries the golden staff of her tantric-staff or khatvanga, which is equal in height to her own body and represents her male consort, Chakrasamvara. The top of her khatvanga is sealed with a golden crossed-vajra and a nectar vase, the impaled blue head of Bhairava, a freshly severed head, a dry white skull, and a crowning half-vajra. A billowing silk ribbon, and a damaru and bell hang from a chain near the top of the khatvanga's shaft.

Upon a misty rock formation at the bottom centre is a white skull-cup that rests on a tripod of three white skulls; which contains swirling blood and the sense organs of eyes, ears, a tongue, and a heart with a victory-banner above it. A billowing mass of clouds and fire ascends from the skull-cup to form Vidyadhari's blazing aura of awareness fire, with countless tongues of fire surrounding all parts of her body, feet and head. This lovely sepia composition was painted in 2010 by the Nepali artist, Sukha Raj Tamang.