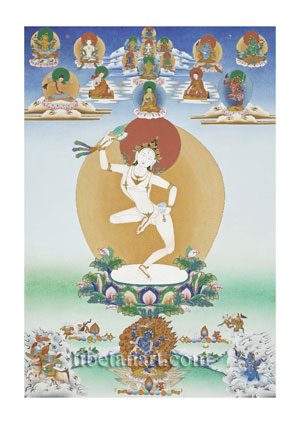 LAST TWO PRINTS AVAILABLE (April 2018). Machig Labdron (circa 1055-1153) was the yogini who founded the Chod lineage of practice in Tibet, and her main teacher was the Indian mahasiddha, Padampa Sangye. The name Machig means 'One-Mother', and Lab is the Southern Tibetan province that she originated from. The Chod or 'cutting' practices are derived from the early Buddhist Prajnaparamita or 'Perfection of Wisdom' teachings; and their aim is to overcome the self-cherishing attitude and the belief in an inherently existing self, which are viewed as the two main obscurations to self-liberation. These obscurations are symbolized in the sacrificial form of one's own body, which is visualized as an 'object of cutting' (Tib. chodyul) that is chopped into small pieces and presented to the hungry ghosts and tormented spirits as a feast offering. The Chod rite is traditionally performed as a solitary practice in a terrifying setting, such as at night in a haunted charnel ground. Such fearful places bear little resemblance to cemeteries or churchyards in the western world, which are essentially gardens of love and remembrance. The beautiful and hypnotic prayers that accompany the Chod practice are sung to the rhythm of a hand bell and a large wooden Chod drum or damaru.

Machig Labdron stands upon a white moon disc and a multicoloured lotus in dancing bow-and-arrow posture, with the heel of her right foot drawn up to her pubic area. She is beautiful, youthful, and radiant white in colour, and her naked body is adorned with the golden ornaments of a five-jeweled crown; earrings; a short, medium and long necklace; bracelets, armlets and anklets. She has three bow-shaped eyes, and half of her black hair is piled-up into a topknot, while the other half hangs freely behind her back. With her raised right hand she rattles a chod-damaru fashioned from two human skulls, which has four striking pellets and a triple-valance of silk brocade adorning its golden handle. With her left hand she rings an upturned silver bell, which she holds at the level of her hip.

Shakyamuni Buddha appears upon the lotus directly above Machig's red halo, and above Shakyamuni is the four-armed wisdom goddess, Prajnaparamita. She is golden-orange in colour and sits with her first pair of hands resting upon her lap in dhyana-mudra, and her second two hands holding aloft a rosary and a text on the 'Perfection of Wisdom'. Seated amidst the clouds above Prajnaparamita are the sambhogakaya manifestations of the 'Five Buddhas', with white Vairocana at the centre, blue Akshobhya in the east, yellow Ratnasambhava in the south, red Amitabha in the west, and green Amoghasiddhi in the north. Crowning the top of this assembly is blue Vajradhara, the primordial or 'Sixth Buddha' who is the source of the main lineages of tantric transmission in the later schools of Indo-Tibetan Buddhism.

Seated upon cloud-borne cushions to the right and left of Shakyamuni are a red hat Kagyu lama, and the second Karmapa, Karma Pakshi, who wears his black vajra-crown. On the cloud-borne lotus to the right of the Kagyu lama is Machig's Indian guru, Padampa Sangye, who wears the typical loincloth and red meditation belt of an Indian mahasiddha, and holds a damaru and a thighbone trumpet in his right and left hands. Above Padampa Sangye is lion-mounted orange Manjushri, who holds two lotus flowers that bear his twin wisdom attributes of a sword and book. And next to Manjushri is the white aspect of the long-life deity Amitayus, who sits with his two hands resting upon his lap in the dhyana-mudra of meditative equipoise.

On the cloud-borne lotus to the left of Karma Pakshi is the red yidam goddess Vajravarahi, who holds a curved knife in her right hand, a skull-cup in her left hand, and supports a khatvanga in the crook of her left arm. Above Vajrayogini is Green Tara, and next to her is blue Vajra Dakini or Nairatma, who holds a curved knife and a skull-cup in her right and left hands.

In the lower left corner is the red warrior and protector deity Tsi'u Marpo, who rides upon a red horse as he wields a red spear-flag and a rope-snare. In the lower right corner is a special female protector of Machig's Chod lineage, Chang-zhon-ma. She is one of a group of three enemy-destroying goddesses that respectively ride upon a many-headed wolf, tigress, and vixen. Chang-zhon-ma is black, naked, three-eyed and extremely ferocious. She rides upon a three-headed iron-wolf whilst she holds a curved knife and a skull-cup full of blood in her right and left hands.

At the bottom centre is the Chod goddess, Troma Nagmo (Skt. Khrodakali), the 'Wrathful Black Lady', who manifests as a fierce blue-black aspect of Vajravarahi. In bow-and-arrow posture she tramples upon a corpse that rests upon her golden sun disc and pink lotus above a triangular vajra-rock formation. She wears the five bone ornaments, a five-skull crown, a garland of severed heads, a tiger-skin loincloth, an elephant-skin shawl, and a human-skin girdle. She abides in a blazing mass of wisdom fire, and wields the attributes of a mummified corpse and a thighbone trumpet in her right and left hands.

Behind the three rows of stacked jewels in the lower landscape, are various groups of the 'seven precious jewels' of the chakravartin or 'universal monarch'. These are: the precious wheel, jewel, queen, minister, elephant, horse, and general; which all appear together as an assembly in the lower right area. As symbols or insignia these seven precious jewels are represented by: a rhinoceros horn (horse), white tusks (elephant), round earrings (queen), square earrings (minister), lozenges (general), blazing gem (jewel), and a branch of red coral (wheel). Behind the left row of jewels are the five sensory offerings of: a mirror (sight), a lute (sound), a golden bowl of tormas or sacrificial cakes (taste), a conch shell full of perfume (smell), and a silk cloth (touch).