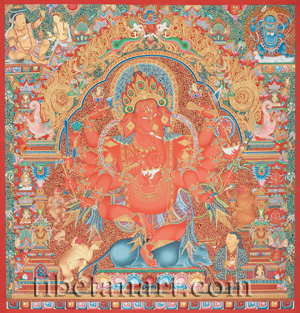 This exquisite painting is an accurate copy of a famous early 15th century thangka that was probably originally painted by a Newar artist for the Ngor Sakya Monastery in Southern Tibet, which was founded in 1429 by Ngorchen Kunga Zangpo. Great Red Ganapati (Skt. Maharakta Ganapati) appears as one of the 'Three Red Deities' of subjugation in the Sakya tradition, the other two being Red Kurukulla and Red Takkiraja.

Maharakta Ganapati is ruby-red in colour, with a corpulent body, a fierce elephant face, two sharp tusks, three piercing eyes, and twelve arms. He stands in dancing 'bow-and-arrow' posture with his left foot resting upon his lotus pedestal, upon which crouches his jewel-disgorging mount or vehicle, a large blue rat.

Ganapati's youthful, dwarf-like and pot-bellied body is adorned with all manner of divine silk garments and golden ornaments, which include an ornate five-jeweled crown, various necklaces, dancing bells, finger rings and tusk bands. His blue-black hair is bound up into a jewel-crowned topknot, and his radiant blue halo and red aura are composed of scrolling roundels that represent the blazing light rays that emanate from each pore of his radiant red body.

With his six right hands Ganapati holds: an arrow, a vajra, a hook, a sword, a triple-feathered dart (bhindipala), and an axe. And with his six left hands he holds: a bow, a skull-cup full of blood, a khatvanga, a skull-cup full of human flesh, a shield and spear-flag, and a wooden pestle. The vajra and skull-cup of blood are held in front of his heart, while his other ten hands are extended threateningly outwards.

The coloured rectangles along the bottom of this painting represent the variegated beryl (vaidurya) floor of the 'pale-blanket' (pandu-kambhala) rock-cave within which Red Ganapati abides, which traditionally serves as the flat vajra-rock foundation for the sky-god Indra's heavenly throne. The colourful crystalline structure of this rock-cave encircles the background of Ganapati's torana, with various geometric cave formations enshrining the small images of related wealth deities. Monkeys are shown climbing amidst the palm trees that have grown from the ascending walls of this cave, and various auspicious emblems, flowers and trees appear amidst the rock crystal formations at its top.

The lower section of Ganapati's complex enlightenment throne or torana ascends upon two elaborate pillars, whose capitals each support the curved arch of the upper torana. This arch is ornamented with the symmetrical Newar elements of two makaras with ornately swirling tails; two hybrid creatures or kinnara-sharabhas, with deer-like upper bodies and scrolling bird-like tails; two coiling naga-serpents with white human upper-bodies, and the crowning central image of a red garuda.

In the upper left corner of the painting is the Indian mahasiddha Virupa, who was the first lineage guru in the Sakya transmission of lam-dre teachings. Virupa is shown performing his legendary act of transfixing the Sun in the sky as he drinks a tavern dry, while his hostess continually serves him with alcohol. In the upper right corner is Bhutadamara, the wrathful 'spirit-subduing' aspect of Vajrapani, who is four-armed and blue-black in colour. Several monkey-attendants or ganas are shown making offerings to Ganapati, whilst a Sakya hierarch - who possibly commissioned this painting - holds a blessing staff as he sprinkles consecrated nectar from his skull-cup.

The entire surface of this composition is ornamented with a fascinating array of iconographical symbols, which are all fully described in the written text that accompanies this Giclee print.