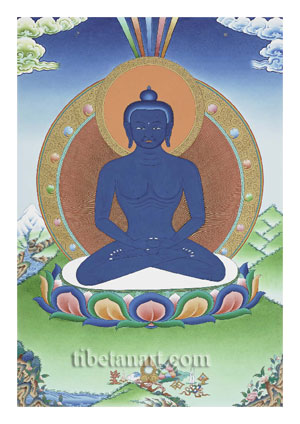 This painting by Sunlal Ratna Tamang depicts the blue Buddha, Samantabhadra, as a single deity composition. Samantabhadra (Tib. Kuntuzangpo), meaning the 'All Good' or 'Ever Perfect', is the Adi or Primordial Buddha of the Nyingma or 'ancient-school' of Tibetan Buddhism, where he is recognized as the sublime source from which many of the Mahayoga, Anuyoga and Atiyoga classes of the highest Tantras and Dzogchen transmissions originate. As such he represents the dharmakaya, the supreme buddha-body of absolute reality, as the innate or natural purity of consciousness itself. As the Adi Buddha he is the source from which the forty-two peaceful and fifty-eight wrathful deities of the Zhitro (zhi-khro) or bardo-mandala originate. He is likewise regarded as the 'Father of all Buddhas' in the Mahayoga texts of the Guhyagarbha Tantra, and in the Seventeen Tantras of the Great Perfection or Dzogchen cycle of transmissions.

Samantabhadra is deep blue in colour, naked and unadorned, symbolizing the space-like and indestructible reality of the dharmakaya as the natural purity of consciousness, or the innate awareness of Buddha-Mind. He sits in vajra-posture upon a white moon disc and a multicoloured lotus, with his two joined hands resting upon his lap in the dhyana-mudra of meditative equipoise. He is endowed with the thirty-two major and eighty minor marks of an enlightened Buddha, and fine rays of golden light emanate from the pores of his body against the red expanse of his inner aura. His outer aura is composed of golden scroll segments with enclosed jewels and a narrow surrounding ring of rainbow light. Shafts of rainbow light also ascend above his orange halo, and in the lower landscape are the five sensory offerings, and the seven insignia of a chakravartin or 'universal-monarch'.

Samantabhadra frequently appears with his white consort, Samantabhadri (Tib. Kuntuzangmo), who manifests as the 'Mother of all Buddhas' and is likewise completely naked and unadorned. She sits upon her lord's lap in sexual union with her two arms embracing his neck, her head inclined to the left as she kisses his lips, and her long hair flowing freely down her back. Samantabhadra, as the male deity, represents the luminous or apparitional nature of the dharmakaya. And Samantabhadri, as the female deity, represents the dharmakaya's pure emptiness or non-apparitional nature. Their sexual union symbolizes the coalescence of pure appearance and emptiness.