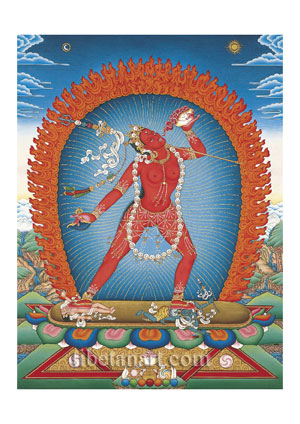 Vajrayogini (Tib. Dorje Naljorma) is a manifestation of supreme enlightenment in female form, and she belongs to the 'Mother' class of the Highest Yoga Tantra systems of the Chakrasamvara cycle of tantras, which emphasizes the cultivation of Wisdom and the attainment of 'Clear Light'. As the red consort of Chakrasamvara her two principal identities are as Vajrayogini or Vajravarahi, who appear in different postures as individual yidam deities in their own right, with the former mainly being practiced in the Gelug and Sakya schools, and the latter in the Kagyu and Nyingma traditions. Vajrayogini's Pure Land is known as Khechara, the 'sky-going' paradise, and the main lineage of her practice descends from the Indian mahasiddha Naropa, because of which she is commonly known as Naro Khandroma or Naro Khechari (Naropa's Dakini).

Vajrayogini abides within a 'reality source' or dharmodaya, composed of two intersecting red triangles that form a double and downward-tapering tetrahedron, which appears as an open six-pointed star with an anticlockwise-swirling pink 'wheel of joy' in four of its six corners. Within this dharmodaya rests the multicoloured lotus and golden sun disc upon which Vajrayogini stands as she leans to the left in alidha-posture. With her left foot she tramples upon the head and heart of black Bhairava, while her right foot tramples on the breasts of red Kalaratri. Bhairava, the 'terrible', is a wrathful form of Shiva, and his head and heart represent the 'seats of ignorance and aversion'. Kalaratri, the 'black night', is a fierce aspect of Umadevi, Shiva's consort, and her breasts represent the 'seat of desire'. Both of these Hindu tantric deities wear their respective silk, tiger-skin, bone and skull ornaments. Both gods hold a curved knife and skull-cup, while four-armed Bhairava also holds a khatvanga and damaru.

Vajrayogini is naked, passionate, radiant, ruby red in colour, and she is youthful and lusty like a sixteen-year-old, with firm round breasts. From the pores of her skin light rays scintillate against her blue inner aura, which is encircled by a red outer aura of blazing wisdom fire. Her long black hair hangs freely behind her back, and her head inclines as she gazes up towards the realm of the dakinis with her three bewitching eyes. Her beautiful body is adorned with golden bracelets, armlets, anklets, earrings, a neck choker, and a jewel-topped five-skull tiara. She also wears a garland of fifty dry white skulls, and the 'five bone ornaments' of a dakini, which are fashioned from carved beads and filigree slivers of human bone.

Her right arm extends downward as she holds a vajra-handled curved knife, with her index finger raised threateningly to terrify all maras or obstructing demons. With her left arm bent upward she holds a tilted skull-cup full of blood, which she pours into her open mouth. The white skull represents her realization of emptiness, and the warm blood that she continually drinks represents the essence of her great bliss. Balanced upon her left shoulder is her tantric staff or khatvanga, which is equal in height to her own body and symbolizes her inseparable union with her consort, Chakrasamvara.

Her khatvanga's golden shaft is sealed at its base with a single-pointed vajra, while its upper shaft supports a crossed-vajra, a golden nectar vase, and three impaled heads: a fresh red head, a decaying blue head, and a dry white skull. An iron trident crowns the top of this particular khatvanga, although in other traditions a half-vajra or full vajra is commonly shown. Likewise the positions and colours of the two lower heads may vary, or all three may be depicted as skulls. A billowing white silk ribbon is tied around the golden nectar vase, along with a golden chain or thread bearing a damaru, a bell, a sun-moon symbol, and a silk tassel or triple-valance. All of these attributes have complex outer, inner, and secret levels of symbolic meaning. The offerings at the bottom centre of this painting include jewels, a ritual vase bearing a skull-cup of fresh blood, a colourful swirling 'wheel of joy or bliss', and a dharmodaya in the form of a six-pointed star.

The drawing used for this painting was made by myself in 1980, as part of an iconographic project I was working on at that time. More than twenty years later my friend Marc Baudin had this and many other drawings of mine made into paintings by two skilful Indian miniature painters that worked at his studio in Jaipur. All of these paintings were executed in pure mineral pigments on handmade paper.