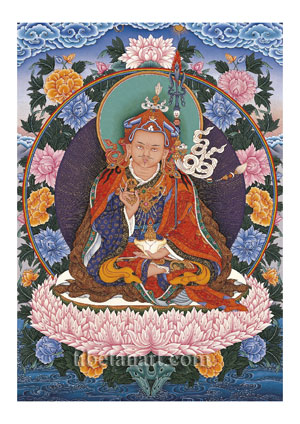 Padmasambhava or Padmakara (Tib. Pema-jungne), meaning the 'Lotus-born', is the principal aspect of Guru Rinpoche, the 'Precious Guru' from Oddiyana in Western India, who is credited with introducing Vajrayana Buddhism into Tibet during the eighth century. Because of his miraculous activities he is widely recognized as the 'Second Buddha' within all schools of Tibetan Buddhism, particularly in the Guruyoga practices of the Nyingma tradition, where he is also regarded as a source of the Mahayoga and Atiyoga or Dzogchen lineages of transmission. Padmasambhava sits in vajra-posture upon a white moon disc that rests within the seed-head of a pink lotus with a thousand petals that arises from a lake. The swirling blue waters of this lake represent Lake Dhanakosha, where Padmasambhava was once miraculously reborn within an immaculate lotus in the form of a radiant eight-year-old child.

He is flesh-colored with a regal and slightly fierce expression, two piercing eyes, an elegant mustache and a small goatee beard, and eyebrows that curve upwards like the wings of a garuda. His head leans to the left and his red 'lotus-hat' has folded upward-pointing flaps on each side, and a central trefoil crest. The beaded edges of his hat's flaps, crest and headband are colored dark blue and white, the crest's interior is marked with three white orbs that represent the 'Three Jewels' of Buddha, Dharma and Sangha, and above are the tantric symbols of a white crescent moon, a golden sun, and a dissolving point or bindu. The top of his lotus-hat is adorned with small colored silk valances, a billowing white silk ribbon that is tied around a golden half-vajra, and the crowning emblem of three vulture feathers. His hat is fastened with red silk ribbons that billow behind his ears, he wears golden earrings, and strands of his long black hair hang freely about his shoulders.

With his right hand he holds a golden five-pointed vajra in front of his heart, while his left hand rests upon his lap in the gesture of meditative equipoise as he supports a skull-cup filled with the nectar of immortal wisdom. Within this blue nectar stands a golden longevity vase that is crowned with a blazing wish-granting gem. In the crook of his left arm Padmasambhava supports the black bamboo shaft of his tantric staff or khatvanga, which is adorned at its top with a crossed-vajra, a nectar-filled vase, three impaled heads, and an iron trident adorned with chained links and a blazing central prong. The three heads represent the 'three kayas' or 'divine-bodies' and consist of a freshly severed blue head (nirmanakaya), a moist red head (sambhogakaya), and a dry white skull (dharmakaya). A billowing white silk ribbon is tied around the base of the khatvanga's nectar-vase, along with a pearl thread that supports a small pellet-drum or damaru, a bell, the conjunct emblems of a red sun and white crescent moon, and a yak-tail pendant.

Rays of golden light emanate from Padmasambhava's body and scintillate against his dark blue aura, which is encircled by a profusion of flowers, buds and leaves, and a luminous rainbow. The drawing for this painting was made by myself and then later made into a painting by my friend Marc Baudin, who employed a skillful Indian miniature painter to colour this composition with pure mineral pigments at his studio in Jaipur.