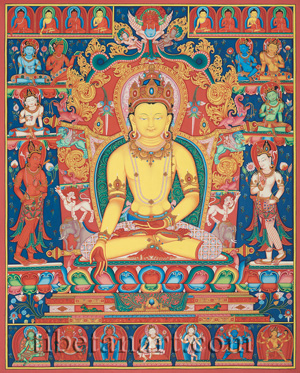 This painting of Ratnasambhava is a copy of a 13th century Pala or Newar thangka, which is now housed in the Los Angeles County Museum. Ratnasambhava (Tib. Rin-chen 'bYung-gnas), the 'Jewel-born', is one of the 'Five Buddhas', who presides as the 'Lord of the ratna or Jewel Family' that is identified with the south, the colour yellow, the element of earth, and the aggregate of feeling. His attribute is a jewel, his vehicle or throne is a horse, his gesture is the boon-granting varada-mudra of generosity, and his wisdom aspect represents the natural purity of pride transmuted into the pristine awareness of equality or sameness.

Here Ratnasambhava appears in the sambhogakaya aspect of a crowned Buddha. He is peaceful, beautiful, radiant and yellow in colour, and he sits in vajra-posture upon a moon disc, multicoloured lotus and jeweled horse-throne within his southern paradise realm of Shrimat, the 'glorious'. He is endowed with the thirty-two major and eighty minor marks of an enlightened being, and wears the eight jewel ornaments and five silk garments of a bodhisattva, and his beautiful silk dhoti or loincloth is decorated with roundels containing deer and swan motifs. With his right hand he makes the boon-granting varada-mudra, while his left hand rests upon his lap in the dhyana-mudra of meditation.

Behind Ratnasambhava's scrolling aura and halo appears his enlightenment throne or torana, with the jeweled golden bar at its base supporting the gajasimha emblem of a pair of elephants with lions standing upon their backs. Each lion supports a lotus, upon which stand a mythical deer-like sharabha-kinnara with a scrolling golden tail, which in turn supports a griffin or garuda-lion with a young god riding upon its back. Above this is the jeweled crest-bar of the torana's upper arch, which supports two ferocious makaras or 'water-monsters' with fabulously scrolling tails; two coiling naga-serpents whose human upper bodies are crowned with serpents; and the crowning image of garuda, who grasps the feet of the nagas with his sharp talons.

Surrounding Ratnasambhava in the main central area of this painting are the Eight Great Bodhisattvas, who are also known as the 'Eight Close Sons'. Flanking Ratnasambhava to his right and left are the standing forms of orange Manjughosha (Manjushri), and white Nivarna-vishkambhin. Directly above Manjughosha is the seated form of white Avalokiteshvara, and above again appears blue Samantabhadra, with red Kshitigarbha appearing at his side. And directly above the standing form of white Nivarna-vishkambin is the seated form of green Akashagarbha holding a vishva-vajra, and above again appears yellow Maitreya, with blue Vajrapani appearing at his side. Each of these eight bodhisattvas is adorned with divine silk garments and the eight jewel-ornaments. The two standing bodhisattvas hold the stems of lotuses in both of their hands, while the other six bodhisattvas are seated and each holds the stem of a single lotus.

In the upper corners of the painting are two panels, each containing four Buddha images, which collectively represent the six manushi or 'mortal' Buddhas of previous epochs - Vipashyin, Shikhin, Vishvabhu, Krakucchandra, Kanakamuni and Kashyapa - along with Shakyamuni (present era) and Maitreya (future era). Along the bottom of the painting is another horizontal frieze that contains seven deities. From left to right these are: Green Tara; four-armed Red Hayagriva; four-armed Red Amoghapasha; White Avalokiteshvara; four-armed White Bhrikuti; eight-armed and three-face Blue Ekajata; and six-armed and three-faced Yellow Marici. In front of Ratnasambhava's ornate throne, with its two green horse emblems, is the motif of the 'Three Jewels' flanked by two deer, which represents the Buddha's teachings.