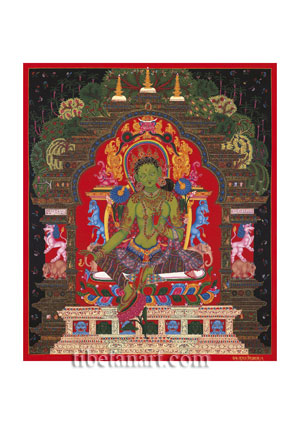 This composition by Sundar Sinkhwal is a copy of a famous painting of Green Tara that is now housed in the Cleveland Museum of Art in Ohio, which some art historians attribute to the work of a brilliant 13th century Newar artist named Arniko. Commonly known as the 'Cleveland Green Tara', this great goddess of salvation is depicted within an ornate enlightenment-throne or torana, which takes the form of an elaborate temple amidst a sacred grove of trees.

Green Tara sits in her traditional posture of royal-ease upon a white moon disc and a multicoloured double-lotus, which rests above an ornate 'elephant-lion' (gaja-simha) throne. The façade panels of this throne display the stylized heads of four blue lions and three green elephants, with the stem of a lotus-pedestal arising from beneath the central panel to serve as a footrest for Tara's lowered right foot. The eight pillars of the throne's façade are decorated with traditional offering-goddess and gaja-simha motifs; the upper plinth is decorated with roundels containing deer, geese and swans; and the throne's lower steps are ornamented with scrolling roundels of lotuses, leaves, petals, pearls, jewels, and elephants.

The two pillars that ascend from either side of her throne contain vignettes of the eight aspects of Tara as a liberator from the 'eight great fears' of: fire (anger), drowning (attachment), lions (pride), elephants (ignorance), imprisonment (greed), snakes (jealousy), demons (doubt), and thieves (false views). Ascending from the capitals of the pillars is a cinquefoil arch decorated with pearls and checkered motifs. The red area inside the arch and pillars defines the shape of Tara's outer aura, with a 'six-fold enlightenment throne' surrounding the patterned roundels of her inner aura. Two elephants guard the bottom of her backrest, with hybrid blue creatures known as sharabhas standing on their backs. The horns of each sharabha support the ends of a jeweled crest-bar, upon which squat two fierce makaras or 'crocodiles' with long scrolling tails, and at the top is the serpent-devouring head of kirtimukha.

Tara has large maternal breasts, a narrow waist, two bow-shaped eyes, and a sweetly smiling face. Her long black hair is bound into a bun behind her left shoulder, with curling strands hanging freely behind her right shoulder, and her halo is coloured like a rainbow. She wears all manner of jeweled ornaments, many of which are adorned with sapphire, coral, and pearls. These include her large earrings; five-jewel crown; bracelets, armlets and anklets; short, medium and long necklaces, and her jeweled belt. Her trousers are fashioned from multicoloured silk stripes that are decorated with diamond and zigzag designs, with alternating roundels that contain images of geese and swans. Silk pleats hang from the sides and front of her belt, and encircling her thighs to fall in a pleated fold over her left forearm is a diaphanous and transparent scarf, which is decorated with small flowers and a blue edging.

With the outstretched palm of her right hand Tara makes the combined gesture of supreme generosity and protection, with a red-robed devotee squatting beneath her palm. With her left hand held in front of her heart she makes the gesture of giving refuge, with the tips of her thumb and third finger touching to form a circle, and her other three fingers extended to represent the 'Three Jewels' of Buddha, Dharma and Sangha. The curved stem of a lotus arcs gracefully above the diamond-shaped lines on her palm, before curving upwards to terminate in a stylized leaf, bud, and a fully opened blue utpala lotus with a yellow centre. This lotus blossoms into many petals at the level of her left shoulder, with an identical blue lotus ascending from behind her hip to blossom at her right shoulder.

The outer temple that surrounds Tara's throne and inner torana is fashioned from many horizontal steps or levels of precious metals, gemstones, and pearls, which are designed in different patterns, such as scrolls, roundels, lotus-petal, diamond and zigzag designs. The symmetrical gaja-simha motif of a white lion standing upon an elephant's back defines the central façade of her temple, with the roof structure appearing above. A small upper façade depicts the minute four-armed forms of yellow Prajnaparamita and white Avalokiteshvara, each of whom is flanked by two attendants, and just above the centre of the cinquefoil arch is the small image of green Amoghasiddhi Buddha, the 'Lord of the Karma or Action Family', of which Tara is the principal female bodhisattva and consort. These three deities represent the 'Three Jewels' of Buddha (Amoghasiddhi), Dharma (Prajnaparamita), and Sangha (Avalokiteshvara). At the very top of the temple are three stupas with white domes and golden parasol-wheel spires, which represent the Buddhas of the three times – past, present, and future. Behind the temple's complex roof emerge the canopies of various species of Indian trees, with many palms trees ascending against the dark upper background, while a rain of heavenly flowers falls from above. The top central tree is an acacia (khadira) tree that bears jeweled flowers, identifying this form of Green Tara as Khadiravani Tara, or 'Tara of the Acacia Forest'.