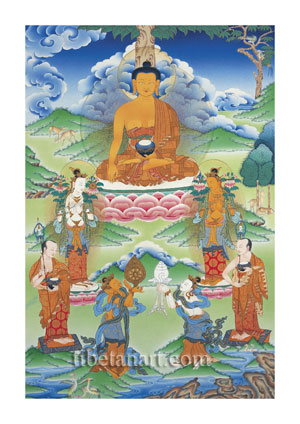 This painting, by the artist Sunlal Ratna Tamang, depicts the seated form of Shakyamuni Buddha with his two main disciples, along with the Bodhisattvas Maitreya and Manjushri, and the two Vedic gods Brahma and Indra.

Shakyamuni Buddha is endowed with the thirty-two major and eighty minor marks of a fully enlightened Buddha, and he is radiant and golden in colour. He wears the three embroidered and patched red robes of a Buddhist monk, and he sits in vajra-posture upon a white moon disc and an open pink lotus with many petals. With his right hand he makes the 'earth-witness' gesture, touching the ground as he calls upon the Earth-goddess to bear witness to his enlightenment. His left hand rests upon his lap in the gesture of meditation upon emptiness, with its palm supporting a jeweled blue alms-bowl that is filled with the white nectar of immortal wisdom. And he sits beneath the pear-shaped leafy canopy of the Sacred Fig or Bodhi Tree that arises behind his back.

To the lower right of Shakyamuni Buddha is Maitreya, the white 'Bodhisattva of Loving-kindness', who stands upon a small moon disc and lotus pedestal wearing the five divine silk garments and eight jeweled ornaments of a Bodhisattva. With his two hands forming the teaching gesture, or 'wheel-turning' dharmachakra-mudra, he holds the stems of two pink lotus flowers that blossom at the level of his ears. His right hand-held lotus supports a golden water-flask, and his left hand-held lotus supports a golden wheel with eight spokes. To the lower left of Shakyamuni is Manjushri, the orange 'Bodhisattva of Wisdom', who is similar in appearance to Maitreya and appears holding his twin attributes of a sharp wisdom-sword and a sacred text upon his right and left hand-held lotus blossoms.

Below these two Bodhisattvas are the Buddha's two principal disciples, Sariputra and Maudgalyayana, who both stand upon embroidered mats and wear the three red robes of a Buddhist monk. With their right hands they each hold the sandalwood shaft of their khakkhara or 'mendicant's staff', which is adorned with a small iron hook and is crowned with a symbolic iron frame that supports four iron rings and two small white stupas. And with their left hands they each hold a nectar-filled blue alms-bowl.

In the bottom centre below Shakyamuni stand Brahma and Indra, who were the first two great gods to supplicate themselves before Shakyamuni Buddha after he attained enlightenment. Brahma, the great four-faced god of creation, is golden-yellow in colour and wears the five divine silk garments and eight jewel ornaments. With his two hands he holds aloft a magnificent golden wheel with eight spokes, symbolizing his request for the Buddha to teach, or 'Turn the Wheel of Dharma', for the benefit of all beings. The great sky-god Indra or Sakra is white in colour and wears similar silk garments and jewel ornaments. With his two hands Indra holds aloft a precious white conch-shell, which spirals towards the right and is adorned with a white silk scarf. This great conch-shell symbolizes Indra's request for the Buddha to 'Proclaim the Sound of the Dharma' throughout the ten directions of space.