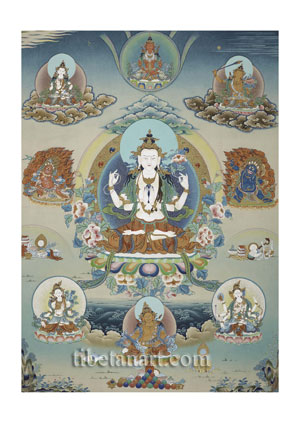 LAST TWO PRINTS AVAILABLE (January 2019). This thangka painting by Pema Wangyal shows Four-armed Avalokiteshvara as the central figure of a nine-deity assembly that depicts the three trinities of virtue, longevity, and accomplishment. The 'Trinity of Virtue' represents the Buddha's enlightened qualities of wisdom, compassion and power that are embodied in the forms of the three great bodhisattvas, Manjushri, Avalokiteshvara and Vajrapani, who are collectively known as the 'Lords of the Three Families'. Manjushri is the 'Lord of the Tathagata or Buddha Family', which emphasizes the transformation of ignorance into wisdom or discriminating awareness. Avalokiteshvara is the 'Lord of the Padma or Lotus Family', which emphasizes the transmutation of desire into compassion. And Vajrapani is the 'Lord of the Vajra Family', which emphasizes the transformation of anger or aversion into spiritual power or energy.

Four-armed Avalokiteshvara, who is more commonly known by his Tibetan name of Chenrezig, dominates the centre of this composition. He sits in vajra-posture upon a white moon disc and a multicoloured lotus that arises from a lake. He is white in colour, and adorned with the thirteen silk and jewel ornaments of a bodhisattva. With his first pair of hands palms-folded in front of his heart he holds a blue wish-granting gem. And with his second pair of right and left hands he holds a crystal rosary and an immaculate lotus. His four arms represent the 'four immeasurables' of his loving kindness, compassion, sympathetic joy, and perfect equanimity.

Manjushri, the bodhisattva of wisdom, appears upon the cloudbank in the upper right corner. He is orange-yellow in colour, and wields his blazing wisdom-sword with his raised right hand, while his left hand holds the stem of a lotus in front of his heart that bears a text on the 'Perfection of Wisdom' (Prajmaparamita-sutra).

Directly below Manjushri is Vajrapani, the wrathful bodhisattva of power or energy, who is dark-blue in colour and stands in pratyalidha-posture upon a golden sun-disc and lotus amidst a blazing mass of wisdom fire. Vajrapani has three bulging eyes, bared fangs and upward-streaming hair, and he wears bone ornaments, a five-skull crown, a serpent necklace, and a tiger-skin loincloth. With his right hand he wields aloft a five-pointed golden vajra, and with his left hand he makes the threatening tarjani gesture in front of his heart.

The 'Trinity of Longevity' consists of Amitayus (top centre), White Tara (bottom left), and Ushnishavijaya (bottom right), who each sit in vajra-posture upon a white moon disc and a lotus. Amitayus, meaning 'Infinite Life', is the long-life aspect of Amitabha Buddha. He is red in colour, appears within a circle of rainbow light, and wears the traditional silk and jewel ornaments of a bodhisattva. With both hands resting upon his lap in the dhyana-mudra of meditative equipoise he holds a golden long-life vase, which is filled with the nectar of immortal wisdom and sealed with a red gemstone.

White Tara is adorned with the five silk and eight jewel ornaments of a goddess, and her radiant face, hands and feet are adorned with seven bow-shaped eyes. The three eyes on her face represent the purity of her body, speech and mind, and the four eyes on her palms and soles represent the 'four immeasurables' of her boundless loving kindness, compassion, sympathetic joy, and perfect equanimity. With her right hand she makes the varada-mudra of supreme generosity, and with her left hand she makes the gesture of giving refuge while holding the stem of a blue lotus in front of her heart.

The 'Trinity of Accomplishment' consists of Vajrasattva (top left), Jambhala (bottom centre), and Hayagriva (middle left), who represent the activities of pacifying, increase, and subjugating. Vajrasattva, the 'Indestructible Hero', is white in colour, sits in vajra-posture upon a cloud-borne moon disc and lotus, and wears the divine silk and jewel ornaments of a bodhisattva. With his right hand he holds a five-pointed vajra in front of his heart, and with his left hand he holds an upturned bell at the level of his hip. Vajrasattva's hundred-syllable mantra is believed to be particularly effective in purifying the defilements of anger and aggression.

Jambhala, the god of wealth and prosperity, appears in the form of a semi-wrathful yaksha deity, with a corpulent golden-yellow body and two bulging eyes. He sits in a posture of royal-ease upon a moon disc and lotus, with his right foot resting upon a white conch shell. He is adorned with divine silks and jeweled ornaments, and wears a garland of flowers. With his right hand he makes the boon-granting varada-mudra while holding a large citron fruit, and with his left hand he holds a treasure-mongoose that disgorges a stream of jewels from its mouth.

Hayagriva, the 'Horse-necked', is a wrathful red manifestation of Avalokiteshvara, whose unique symbol is the neighing green horse's head that appears above his crown. He abides within a blazing mass of wisdom fire as he stands in pratyalidha-posture upon two corpses, a golden sun-disc and a lotus. He has three bulging eyes, a gaping mouth, bared fangs, upward-streaming hair, and he is adorned with bone ornaments, a five-skull crown, and a garland of severed heads. As garments he wears a tiger-skin loincloth, a human-skin shawl, and the flayed skin of an elephant that he stretches across his back. With his right hand he wields aloft a skull-topped club, and with his left hand he makes the threatening tarjani gesture in front of his heart.