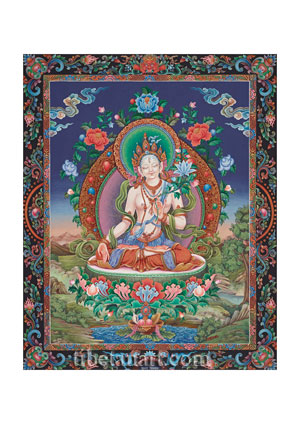 This painting by the Newar artist Sundar Sinkhwal depicts the goddess White Tara in her traditional seated form. White Tara (Skt. Sita Tara: Tib. Drol-kar) is the long-life aspect of the female Bodhisattva Tara, the popular Buddhist goddess of mercy and compassion. White Tara is also known as Saptalocana Tara, or 'Seven-eyed' Tara, and as an important Buddhist yidam or meditational deity in her own right she is known as 'Wish-fulfilling Wheel White Tara'. As one of the three principal long-life deities White Tara also frequently appears in a longevity trinity with Ushnishavijaya and Amitayus. Her meditational practices are mainly employed to confer long-life, alleviate illnesses, and to remove the obstacles that are indicative of an untimely death. Thangkas of White Tara and the 'Trinity of Long-Life Deities' are frequently commissioned for such purposes, or to auger an auspicious rebirth for a deceased relative or friend. Tara is invoked by the syllables of her mantra; OM TARE TU-TARE TURE SOHA.

White Tara sits in vajra-posture upon a white moon disc that rests upon the seed-head of a multicoloured lotus. She is graceful, beautiful, and youthful like a sixteen-year-old, with full breasts, a narrow waist, and a sweetly smiling face. Her complexion is radiantly white like a full autumnal moon, and scintillating rays of golden light emanate from her body against her inner blue aureole, which is encircled by her jewel-entwined golden outer aura. Her divine form is adorned with seven bow-shaped eyes, with the three eyes of her face representing the perfection of her body, speech and mind, and the four eyes in her palms and soles representing the 'four immeasurables' of her boundless compassion, loving kindness, sympathetic joy, and perfect equanimity. With her lowered right hand she makes the boon-granting varada-mudra of supreme generosity. And with her left hand she makes the abhaya-mudra of protection or granting refuge, whilst holding the stem of a blossoming blue utpala lotus in front of her heart.

Tara wears the five divine silk garments of a sambhogakaya goddess, and the eight jeweled ornaments of a golden tiara; earrings; a belt; bracelets, armlets and anklets; and short, medium and long necklaces. Half of her long black hair is bound up into a jeweled topknot, while the other half hangs freely behind her shoulders. Her golden tiara is adorned with five radiant jewels, hanging loops of pearls, and a small lotus. Her necklaces are adorned with jewels of sapphire, coral and pearls, and pearl-loops hang from her golden belt.

A canopy of colourful flowers and leaves appears behind Tara's golden aura and pearl-studded halo, and she abides within a beautiful natural landscape of foliage, rocks and distant hills, with symmetrical clouds adorning the sky. A convoluted lotus leaf floats upon the turbulent water of the lake in front of Tara, bearing a golden bowl that contains the five delightful sense objects of a jeweled mirror (sight), cymbals (sound), a perfumed conch shell (smell), fruit (taste), and a silk cloth (touch).

A rectangular border or torana surrounds the interior landscape of this painting, with its narrow inner area decorated to resemble silk brocade designs. The dark outer torana is adorned with the colourful symmetrical elements of stylized lotus petals, leaves and tendrils, blazing gems, crests and jewels. At the top centre is the red serpent-devouring head of Chepu or kirtimukha, the 'face of glory'. At the bottom centre a pair of blue dragons guard a semi-circular crest that bears the Ranjana inscription: “Shri Saptalocana Tara Devi Nama”, with the artist's name, Sundar Sinkhwal, below.