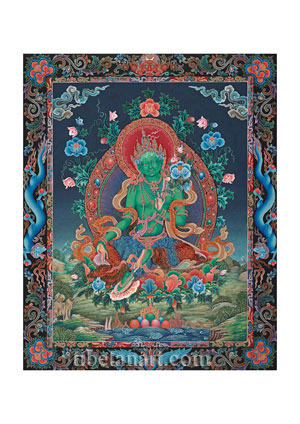 This painting by the Newar artist Sundar Sinkhwal depicts Green Tara, the popular Buddhist goddess of mercy and compassion. As the 'Saviouress' Green Arya Tara (Tib. Drolma) sits in her traditional posture of royal-ease upon the silver-white moon disc of her multicoloured lotus, with her left leg drawn up and her extended right foot resting upon a small lotus pedestal. As the spiritual counterpart of Amoghasiddhi Buddha, the 'Lord of the Karma or Action Family', she is emerald green in colour, representing that like the green and all-pervasive element of wind she is both swift and heroic in responding to the dangers, fears and suffering of all beings. Tara is invoked by the syllables of her mantra; OM TARE TU-TARE TURE SOHA.

Tara is beautiful, graceful, and youthful like a sixteen-year-old, with firm breasts, a narrow waist, two lotus-like eyes, a sweetly smiling face, and delicate features. She wears the five divine silk garments of a sambhogakaya goddess, along with the eight jeweled ornaments of a golden tiara; earrings; a belt; bracelets, armlets and anklets; and short, medium and long necklaces. Half of her long black hair is bound up into a jeweled topknot, while the other half hangs freely about her shoulders. Her golden tiara is adorned with five radiant jewels and hanging loops of pearls, her necklaces are adorned with pearls, sapphire and coral gemstones, and pearl-loops hang from her golden belt. With her lowered right hand resting upon her knee Tara makes the boon-granting varada-mudra of supreme generosity. And with her left hand she makes the abhaya-mudra of protection or granting refuge, as she holds the stem of a blue utpala lotus in front of her heart.

Golden light rays emanate from Tara's divine form and scintillate against the dark blue of her inner aura, which is encircled by her jewel-entwined outer aura. A canopy of colourful flowers, leaves and tendrils emerges from behind the scrolls of Tara's golden aura and halo, and she abides within a beautiful natural landscape of foliage, rocks and distant hills, with symmetrical clouds adorning the sky. On the surface of the lake below Tara's lotus-seat are the offerings of jewels, a blazing gem, an eternal knot, and the royal chakravartin emblems of the king and queen's earrings, elephant tusks, and a rhinoceros horn.

A rectangular border or torana surrounds the interior landscape of this painting, with its narrow inner area decorated to resemble silk brocade designs. The four corners of the dark outer torana are adorned with the colourful symmetrical elements of stylized lotus petals, leaves and tendrils. At the top centre is the red serpent-devouring head of Chepu or kirtimukha, the 'face of glory'; and a fiery blue and jewel-grasping dragon descends on each side of the torana. At the bottom centre is a crest adorned with the head and blue wings of a garuda that bears the name of the artist, Sundar Sinkhwal.