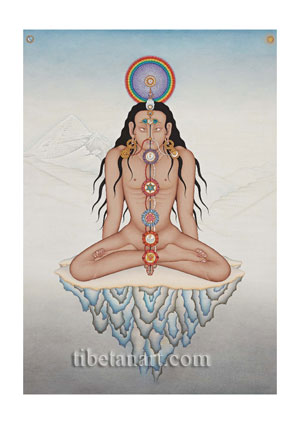 LAST TWO PRINTS AVAILABLE (April 2018). This diagram illustrating the chakras of the Hindu kundalini-yoga system was drawn by Robert Beer, and later rendered into colour by an Indian miniature painter who worked at the studio of Marc Baudin in Jaipur, India. The painting shows a naked yogin seated upon a triangular rock formation with the ethereal form of Mount Kailash appearing in the background. The yogin sits in vajra-posture with his hands behind his thighs, his long locks of matted black hair hanging freely about his shoulders and back, and his eyes focused in a concentrative gaze upon a point at the ajna-chakra between his eyebrows.

Ascending from the tip of his penis and through the axial centre of his body is the central channel or median psychic nerve, which is known as the sushumna-nadi or 'most refined channel'. The central channel is traditionally described as ascending from the base of the spine to the crown of the head, with the two subsidiary 'lunar and solar' channels running parallel on either side of it. The white lunar channel, known as the ida-nadi or 'channel of comfort', ascends to the left of the central channel, and carries the white cooling male essences (semen) of the moon. And the red solar channel, known as the pingala-nadi or 'tawny channel', ascends to the right of the central channel, and carries the red heating female essences (uterine blood) of the sun. In certain Indian tantric traditions the polarity essences of these two subsidiary channels may be reversed, but in this diagram these two channels are shown arising from the symbols of a white crescent moon and a golden sun in the yogin's left and right testicles. They then ascend on either side of the central channel until they finally curve below the crown of the head and descend into the yogin's left and right nostrils. The prana or 'life-energy' carried by these two subsidiary channels are shown here extending twelve finger-widths beyond each of the yogin's nostrils, with the tip of the white lunar channel terminating at the white crescent moon that adorns his left earring, and the tip of the red solar channel terminating at the golden sun on his right earring. Indian yogins or mahasiddhas are sometimes described as wearing the sun and moon as ear ornaments, and the common Sanskrit term for a ring or earring is kundala, which has the same root as kundalini, meaning 'coiled or circling'.

At various points along their ascent the lunar and solar channels cross over the central channel, creating constricting 'knots' or psychic nerve-plexuses, which are known as nadi-chakra or 'channel wheels'. These constricting knots restrict the flow of the vital energies or 'winds' into the central channel, upon which the 'mind' is believed to ride or travel as 'breath' or prana. In both the Hindu and Buddhist channel-wheel systems there are stated to be 72,000 psychic nerves or channels that permeate the 'subtle body' of a practitioner. Numerically these are derived from the eight main directional channels at the heart chakra: which first branch into three, creating twenty-four; then branch into three again, creating seventy-two; then finally into a thousand more refined branches, creating seventy-two thousand. In the Hatha Yoga traditions purification of these 72,000 nadis is attained through the techniques of pranayama or breath-control, and through the practice of asanas or yogic postures. The term 'Hatha Yoga', literally meaning 'forceful or violent union', is composed of the two bija or 'seed syllables' HA and ¬THA of the Sun and Moon, symbolizing the red solar energy of the pingala-nadi and the white lunar energy of the ida-nadi being 'forced' (hatha) into union (yoga) in the sushumna-nadi or central channel.

At the base of the central channel in the perineum is the muladhara-chakra, or 'root-bearing wheel', in which the serpent-goddess Kundalini Shakti is said to lie coiled and dormant. She is described as having three-and-a-half coils, which may symbolize the goddess's menstrual cycle. But when she is awakened her serpent-like head enters the base aperture of the central channel, like a thread ascending through a hollow reed, as she seeks to unite with her white Lord Shiva, who resides at the crown of the head. The muladhara-chakra has four red petals and bears the yellow square of the earth element on its central dais. Within this square are the symbols of a downward-pointing triangle enclosing the LAM syllable of the earth element, and a golden Shiva lingam around which the serpent Kundalini is coiled. The muladhara's presiding deity is Ganesha, its goddess is Dakini, its animal is an elephant, its elemental deity is the earth-goddess Prithvi, and is four petals are inscribed with the Sanskrit syllables: vam, sam, sham, sam.

Above this, and located at the pubic region, is the svadhisthana-chakra, or 'wheel of self abode', which has six red petals and bears a silver crescent and the seed syllable VAM of the water element on its white central dais. The svadisthana's presiding male deity is Brahma, its goddess is Rakini, its animal is the makara or crocodile of the water-god Varuna, and its six petals are inscribed with the Sanskrit syllables: bam, bham, mam, yam, ram, lam.

Above this, and located at the solar plexus, is the manipura-chakra, or 'jewel-city wheel', which has ten blue-gray petals and bears a downward-pointing red triangle and the seed syllable RAM of the fire element on its central dais. The manipura's presiding male deity is Vishnu, its goddess is Lakshmi, its animal is the ram of the fire-god Agni, and its ten petals are inscribed with the Sanskrit syllables: dam, dham, nam, tam, tham, dam, dham, nam, pam, pham.

Above this, and located at the heart, is the anahata-chakra, or 'boundless wheel', which has twelve pink petals and bears two intersecting triangles that form a six-pointed star that is sealed with the seed syllable YAM of the wind element at its blue-black centre. The anahata's presiding male deity is Rudra-Shiva, its goddess is Kakini, its animal vehicle is the deer of the wind-god Vayu, and its twelve petals are inscribed with the Sanskrit syllables: kam, kham, gam, gham, ngam, cam, cham, jam, jham, jnam, tam, tham.

Above this, and located at the throat, is the vishuddha-chakra, or 'wheel of purifying', which has sixteen purple petals and bears a silver crescent and the seed syllable HAM of the space element on its white central dais. The vishuddha's presiding male deity is Sadashiva, its goddess is Shakini, its animal is a white elephant, and its sixteen petals are inscribed with the sixteen Sanskrit vowels: a, aa, i, ii, u, uu, ri, rii, lri, lrii, e, ai, o, au, am, ah.

Above this, and located at the 'third-eye' between the eyebrows, is the ajna-chakra, or 'commanding wheel' of intuition and wisdom, which has two gray or white petals and a white central dais that is sealed with the syllable OM inside a downward-pointing triangle or a Shiva lingam. The ajna's presiding male deity is Paramashiva, its goddess is Hakini, its animal is a white swan, and its two petals bear the Sanskrit syllables: ham and ksham. Sometimes the presiding deity of the ajna-chakra is identified with Ardanarishvara, the androgynous form of Shiva and Shakti who are united together in the right male and left female halves of the same body.

Depicted above the ajna-chakra are two 'secret chakras' that are utilized in an esoteric yogic practice known as khechari-mudra, where the frenum under the tongue is gradually severed and the tongue slowly lengthened until it can be swallowed back to forcibly churn a cavity in the throat's soft upper palate. The purpose of this extreme yogic practice is to churn the soma or vital 'white lunar nectar' of Shiva that is preserved deep within the cranium, causing this soma to melt and flood the yogin's body with the nectar of immortal bliss. These two secret chakras are known as the golata and lalata, and they are respectively located on the uvula at the back of the throat, and inside the pineal gland at the centre of the brain. The practice of khechari-mudra is also used to induce states of suspended animation, so that the yogin may be interred under the earth or in water for prolonged periods, and be immune from all forms of poisoning or bodily decay.

Above the pink petals of the lalata is the crowning syllable OM, with a white crescent moon, a golden sun, and a dissolving flame above it; and appearing above the crown of the yogin's head is the sahasrara-padma, or 'thousand-petal lotus'. On the central dais of this lotus is an upward-pointing white triangle with a red dot or bindu at its centre, which represents the red goddess Kundalini Shakti merging in non-dual union with her white lord, Shiva. The thousand-petal lotus appears as a halo of rainbow-coloured light, which consists of twenty concentric rings, each of fifty lotus petals, with each ring of fifty petals bearing the sixteen vowels and the thirty-four consonants of the Sanskrit alphabet. As a 'rosary of sound', these fifty syllables also collectively occupy the fifty petals of the six chakras described above, which consist of 4 + 6 + 10 +12 + 16 + 2 = 50 lotus petals.