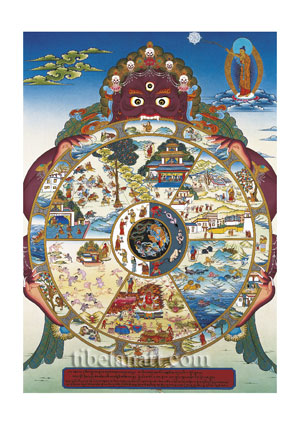 The black pig (wind), green snake (fire), and red cockerel (water) within the central black hub of the wheel, represent the three elemental poisons of ignorance, aversion, and attachment. These three creatures chase and bite each other's tails, indicating how these three potent poisons give rise to an endless array of self-perpetuating cycles of delusion, craving and hostility.

The second ring shows human beings in the 'intermediate state' (bardo) between death and rebirth, who are conditioned by their own karmic consequences. In the white half of the ring monastic and lay practitioners ascend towards the three fortunate upper realms of the gods, asuras, and humans. While in the grey half of the ring naked and bound humans are dragged by fierce red demons towards the three miserable lower realms of the animals, hungry ghosts, and hell denizens.

The environments and sufferings of the six realms are graphically illustrated in the wide third ring of the wheel. The combined realms of the asuras and gods (upper left and top) are conditioned by jealousy and pride, with the envious asuras or 'jealous gods' fighting an endless war with the proud gods over possession of the great 'wish-granting tree' that divides their realms. The human realm (upper right) is conditioned by attachment and eight kinds of suffering that include illness, old age and death. Creatures in the animal realm (lower right) are conditioned by ignorance or stupidity. The hungry ghosts or tormented spirits (lower left) are conditioned by intense avarice or craving, which is symbolized by the mirages of the barren desert in which they abide, where water turns to puss or fire, while their pinhole mouths, huge stomachs, thin necks and limbs keep them in a constant state of hunger, thirst and weakness. The hell realms (bottom center) are conditioned by intense aversion or hostility, where Yama the 'Lord of the Dead' presides, and where the black and white deeds of those dragged before him are weighed in a balance. Depending on the heavy karmic weight of their symbolic black pebbles, unfortunate beings are then condemned to enter one of the eight hot or eight cold hells, which get progressively more severe and enduring in their degrees of self-created karmic retribution.

Around the outer ring of the wheel are cartouche-like illustrations that symbolically represent the Buddhist doctrine of the 'twelve links of dependent origination'. These links reveal how karmic tendencies, emotional defilements and conditions gives rise to an endless chain that propels beings through continuous cycles of birth, death and rebirth within the six realms of cyclic existence. Circling clockwise from the bottom centre, these twelve links show: (1) a blind man being led (primordial ignorance); (2) a potter (habitual propensities); (3) two playful monkeys (consciousness); (4) two men being ferried in a boat (name and form); (5) an empty house with five windows (five sensory fields); (6) a couple touching (contact); (7) blinded by an arrow in one eye (feelings of pleasure and pain); (8) drinking alcohol (craving); (9) a man picking fruit (grasping); (10) a woman with infants (becoming); (11) childbirth (birth); (12) a corpse being carried to a cemetery (ageing and death).

The entire 'Wheel of Life' is clutched in the claws of a ferocious purple demon (mara) that devours the wheel with his sharp teeth to illustrate the impermanent nature of all phenomena within cyclic existence. In the upper right corner of the painting is Shakyamuni Buddha, who stands outside the wheel and points towards a moon-like eight-spoke wheel or dharmachakra, representing the Buddha's teachings on the 'Eightfold Noble Path' that leads to complete liberation from samsara.

At the bottom of this painting is a Tibetan inscription on a red plaque, which begins with the verse: “With the application of effort, in order to get out (of the wheel of samsara), one should engage in the teachings of the Buddha. Whoever practices on the path of discipline with conscientious mindfulness, just like an elephant in a house of straw, the hosts of the Lord of Death will be vanquished. And having completely abandoned the cycle of rebirth, one will arrive at the end of suffering.”