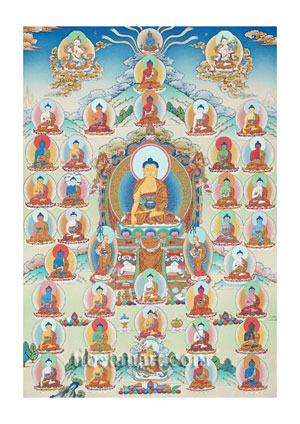 LAST PRINT AVAILABLE (June 2019). The practice tradition of the Thirty-five Buddhas of Confession is based upon a Mahayana text known as the 'Sutra of Three Heaps' (Skt. Triskandha-sutra), which is performed by the Buddhist sangha in order to absolve any transgressions against their religious vows. This three-part practice involves: praises to the Buddhas, confession, and dedication of merit. There are several different traditions of depicting the Thirty-five Buddhas, with their varying colours, gestures, and their few individual hand attributes. This thangka was painted by Dorje Tamang and is identical to that of the Tibeto-Mongolian pantheon of woodblock-prints known as the 'Three Hundred Icons', which was compiled in Beijing by Changkya Rolpai Dorje (1717-86).

The sequence in this composition begins with (1) Shakyamuni Buddha, who sits upon his enlightenment and lion-throne at the centre, while being flanked by his two main disciples, Sariputra (left) and Maudgalyayana (right). The blue Buddha to the left of Sariputra is the second of the Buddhas (2), and then the sequence circles clockwise around Shakyamuni's throne to the white Buddha (12) to the right of Maudgalyayana. The next nine Buddhas (13-21) circle clockwise outside the first circle of Buddhas (2 -12), with (17) being at the top. The last fourteen Buddhas are arranged from left to right amidst the offerings in the three horizontal rows at the bottom: (22-26) upper row, (27-31) middle row, and (32-35) lower row. At the top centre is blue Vajradhara, who is flanked by Vajrasattva and White Tara to his left and right. And at the bottom centre is the yellow lion-mounted wealth god, Vaishravana.

A brief description of each of the Thirty-five Confessional Buddhas are given on the back of this print, which includes the meaning of their Sanskrit and Tibetan names, their colours, hand gestures and occasional attributes.