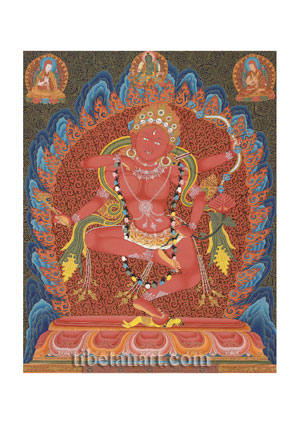 This painting by Sunlal Ratna Tamang depicts the red subjugating goddess Kurukulla, whose meditation practice is popular in all schools of Tibetan Buddhism. Kurukulla was an early Indian tribal goddess, and her name is included in the Hindu text of the Lalita-sahasra-nama, which lists the thousand names of Shri Devi, as the 'Glorious Goddess'. However, the Buddhist aspect of Kurukulla is identified with the goddesses Red Tara and Vajratara. She is also known as Tarodbhava Kurukulla, meaning 'Kurukulla who has arisen from Tara'; or as Uddiyana Kurukulla, who is specifically associated with the mahasiddha, King Indrabhuti, from Uddiyana in Western India. Kurukulla's Tibetan name is Rigjeyma (Rigs-byed-ma), meaning the 'Knowledge Lady'; and she is also known as Pema Khandro, the 'Lotus-dakini'; or as Wangyi Lhamo, the 'Powerful subjugating goddess'.

In the Tibetan Sakya tradition Kurukulla is associated with the Vajrapanjara Tantra and the Hevajra Tantra, with the transmission of the latter coming from the Indian mahasiddha traditions of Lalitavajra and Virupa to the Tibetan translator Drogmi Yeshe (933-1051). Along with the semi-wrathful forms of Red Takiraja and Great Red Ganapati, Kurukulla manifests as one of the 'Three Red Deities' of the Sakya tradition, and her practice is also included amongst the 'Thirteen Golden Dharmas' of the Sakyas. This composition depicts Kurukulla in the early Newar style of painting that was first made popular in the Sakya monasteries and temples of Central and Southern Tibet.

Kurukulla's praises describe her function as being able to enslave all gods, demi-gods and humans, and her meditation practices are employed to overcome all forms of avarice, to close the entrance to rebirth in the lower realms, to increases wisdom, to counteract all negativities or poisons, and to lead practitioners towards Amitabha's Pure Land of Sukhavati. Her abode is identified as the Kurukulla Cave, the 'Cave of Knowledge', located on the Kurukulla Mountain of India, which is described as possessing all the enchanting attributes and magnetizing qualities of the goddess herself.

The Hevajra Tantra describes how: “This goddess arises from the syllable HRIH, is red in colour and holds a bow, an arrow, an utpala lotus, and a hook in her four hands. By merely meditating on her one brings the threefold world to subjection. By reciting one hundred thousand of her mantras one can subjugate kings, by ten thousand the people, by ten million the cattle and yakshas, by seven hundred thousand the jealous gods or asuras, by two hundred thousand the gods or devas, and by a hundred the yogins.”

The mundane rituals associated with Kurukulla include the use of amulets, yantras and spells for acquiring wealth, protecting from evil spirits and poisonous serpents, subjugating or enticing members of the opposite sex, and bewitching spouses or lovers. Alchemical techniques are also given for flying, mesmerizing women, producing silver from mercury, and distilling an elixir for longevity. Recipes for herbal ointments and magical pastes are also given to cure impotence and premature ejaculation, to prevent miscarriages and graying of the hair, to ensure easy childbirth or the birth of a son, and to heal a wide variety of afflictions.

Kurukulla is ruby-red in colour, with one face, three eyes, four arms, and she appears here within her cave. She is radiant, youthful like a sixteen-year-old, and she disports herself sensuously, with two perfect breasts and a beautiful face that combines the sentiments of mirth, passion and wrath. Her three eyes are piercing and intoxicating, her twisting tongue is soft and red, and she bares her sharp white teeth and fangs. She stands in ardha-paryarika or dancing bow-and-arrow posture with her right leg drawn up and her extended left leg slightly bent. Her left foot presses upon a small red sun disc that rests upon the breast of a yellow wealth god, who disgorges a string of jewels. This figure lies prone upon the red sun-disc cushion and seed-head of a red lotus, which rests upon the jeweled plinth that forms the floor of her cave.

Her nubile red body is adorned with the five bone ornaments, a short tiger-skin skirt or loincloth, a billowing green and yellow silk scarf, and a long garland of fifty freshly severed and variegated heads. The filigree bone ornaments of her bracelets, armlets, anklets, and three necklaces are delicately painted, and golden bells with tassels hang from the bone-beaded strands that cascade from her belt. She wears bone earrings, a jewel-topped five-skull tiara, and the piled-up curls of her tawny-yellow hair hang freely about her shoulders. With her two upper hands she aims and releases a blue lotus-tipped arrow from her drawn bow, which is also adorned with blue lotuses. With her lower right hand she holds a vajra-marked iron hook, and with her lower left hand the noose-like stem of a large red lotus. Her red inner aura is patterned with fiery roundels of light, and the orange flames of her outer aura radiate symmetrically against the blue angular rocks that define the mouth of her cave. The dark background of this painting is decorated with scrolling golden roundels, and Green Arya Tara crowns the top of her cave. In the upper right and left corners are two hierarchs of the Sakya tradition, probably Sakya Pandita Kunga Gyaltsen (1182-1251), and his nephew Drogon Chogyal Phagpa (1235-1280), who are popularly known as the 'two red ones'.