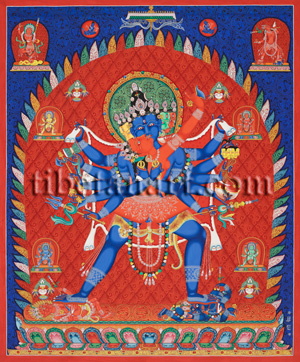 This beautiful painting by Hari Prasad depicts Twelve-armed Chakrasamvara with his consort Vajravarahi, and is based upon a famous 14th or 15th century thangka that is now housed in the Los Angeles County Museum. The original thangka was painted by a skillful Newar artist for one of the Sakya monasteries in Central Tibet, and it shows Chakrasamvara and Vajravarahi according to the tradition of the Mahasiddha Ghantapa, which is characterized by its five-deity mandala and by Vajravarahi embracing her lord with her two legs wrapped around his waist. Both Chakrasamvara and Vajravarahi (Vajrayogini) belong to the 'mother or yogini-tantra' class of Highest Yoga Tantra (anuttarayogatantra) deity practices, which essentially focuses on the cultivation of wisdom and the attainment of 'clear-light'. The Sanskrit name Chakrasamvara (Tib. Khor-lo Dem-chog), is traditionally translated as the 'Wheel of Great Bliss'.

Chakrasamvara is dark blue in colour, with twelve arms, four faces and twelve eyes, and he stands leaning towards the left in alidha posture, with his magnificent form expressing the 'nine sentiments' of classical Indian dance or drama (three each of body, speech and mind). With his two feet he presses upon the 'cushions' of the Hindu god Bhairava and his consort Kalaratri, who represent the two extremes of samsara and nirvana. Bhairava, meaning 'the terrifying', is the wrathful form of Shiva Mahadeva and is blue-black in colour with three eyes and four arms. He wears bone ornaments, a five-skull crown, a tiger-skin loincloth, a garland of severed heads, and holds the attributes of a curved knife, skull-cup of blood, damaru and khatvanga. Bhairava's forehead represents the 'seat' of ignorance, and his heart the 'seat' of anger. Thus both of these defilements are crushed under Chakrasamvara's left foot as he presses Bhairava's bent-back head over his heart.

Kalaratri, meaning the 'dark night', is a wrathful aspect of the great goddess, Durga or Mahadevi. She is red in colour with three intoxicated eyes, four arms, upward-streaming tawny hair, an emaciated body and a drawn face - because of which she is also known as Kotarakshi, meaning 'she whose eyes are sunken'. Kalaratri likewise wears the same ornaments and carries the same four attributes as Bhairava, but her garland is made of dry white skulls. Kalaratri lies upon her back, and her sagging breasts represent her unproductive 'seat' of lust and desire, which are crushed under Chakrasamvara's right foot as he presses down on her chest. Both of these subjugated deities lie prone upon the wide roundel-ornamented sun-disc of Chakrasamvara's multicoloured lotus pedestal, which rests upon the jeweled plinth at the bottom of the painting.

Each of Chakrasamvara's four directional faces has a different shape and expression that symbolically represents the four rites or activities of tantra - pacifying, enriching, subjugating, and wrathful activity. His central blue face is round with a distorted and fierce expression, representing his wrath that annihilates all confusion and obstacles. His right yellow face is oval or egg-shaped with a seductive and laughing expression, representing his activity of subjugation or attracting power. His rear red face is shaped like a sesame seed with a peaceful and passionate expression, representing his activity of pacifying all emotional defilements. And his left green face is square in shape with a heroic expression, representing his activity of enrichment that increases the courage, wealth and lifespan of the practitioner. Each of his four faces is adorned with a jewel-topped five-skull crown, with the main central jewel bearing the small blue-black image of Vajradhara. His long black hair is piled up into two topknots, which are adorned with the symbols of a small skull, a crossed-vajra, a white crescent moon, and a crowning wish-granting gem. The green interior of his halo is decorated with lotus-bearing roundels, and its ornate exterior is embellished with radiant jewels.

The crossed-vajras and wheels of the filigree bone ornaments that adorn Chakrasamvara's limbs are very finely painted, as are the bone jewels and bead loops of his crown. He wears a bone belt with hanging beads and pendants, a short tiger-skin loincloth that has been loosened for sexual intercourse, and a long garland of fifty freshly severed heads, which are coloured to correspond to the 'Five Buddha Families' and strung upon a braided thread woven from the hair of a corpse.

With his first pair of right and left hands crossed before his heart in vajra-humkara-mudra Chakrasamvara embraces his consort as he holds a golden five-pointed vajra and a silver bell. These two attributes represent the union of his compassion or skillful means (vajra), and wisdom-awareness of emptiness (bell). With his second pair of hands he holds aloft the freshly flayed and bloody skin of an elephant, which he stretches across his back with the elephant's head and forelegs appearing on the right side of his body. With his other four extended right hands (top to bottom) he holds a damaru, an axe, a curved knife, and a trident. And with his other four extended left hands (bottom to top) he holds a khatvanga, a skull-cup full of blood, a rope noose, and the severed four-faced yellow head of Brahma. Each of the individual attributes has a deep symbolic meaning, but collectively they represent his complete control and understanding of the 'twelve links of dependent arising' in both their causal and reversed orders or sequences.

Chakrasamvara's consort is Vajrayogini or Vajravarahi, the 'indestructible-sow', who is beautiful, passionate, youthful like a sixteen-year-old, and radiant red in colour. With her two legs wrapped around her lord's waist in the bliss of sexual union, she presses every part of her body against his, while their lips touch and their eyes gaze lovingly at each other. With her left arm she embraces her lord's neck as she offers a skull-cup full of fresh blood to his rear and left faces. And with her raised right hand she holds a vajra-handled curved knife, which she circles towards the ten directions. Her naked body is adorned with the five filigree bone-ornaments of a dakini, her visible bracelets and armlets are decorated with fine crossed-vajras and wheels, and from her bone belt hang the sixty-four hanging loops and delicate pendants of her bone apron. She wears bone earrings, a jewel-topped five-skull tiara with hanging bone loops, a long garland of fifty dry white skulls hangs around her neck, and her long black hair hangs freely down her back.

The diamond-shaped sections of Chakrasamvara's red inner aura are decorated with blazing crests of fiery light, and the stylized tongues of fire that form his outer aura blaze in the colour sequence of the Five Buddhas: white (Vairocana); blue (Akshobhya); yellow (Ratnasambhava); red (Amitabha); and green (Amoghasiddhi).

Within Chakrasamvara and Vajravarahi's inner aura appear the four 'heart dakinis' who, along with the two principal deities in yab-yum union, constitute the five-deity mandala by occupying the cardinal petals of their mandala's central lotus-dais or 'wheel of great bliss'. Each of these four heart dakinis is similar in appearance, with three eyes, four arms, and they each stand in alidha posture upon a sun disc and lotus. They are naked, adorned with the five bone ornaments, a five-skull crown, a garland of fifty freshly severed heads, and they hold the attributes of a damaru and khatvanga in their upper pair of hands, and a curved knife and skull-cup in their lower pair. In sequence they arise from the syllables of the 'Four Mothers' - LAM (Locana), MAM (Mamaki), PAM (Pandara), and TAM (Tara) - with blue-black Dakini in the east, green Lama in the north, red Khandarohi in the west, and yellow Rupini in the south. On the four inter-cardinal petals of the mandala's 'wheel of great bliss' stand four ritual vases, which appear on lotus pedestals near the heart dakinis. The nectar-filled skull-cup that crowns each vase is sealed with lotus flowers and decorative sprigs of leaves.

The dark blue background of this painting is decorated with scrolling roundels, with a stylized white parasol crowning Chakrasamvara's aura, and a blue offering god and goddess appearing in the red orbs that flank the parasol. In the upper left and right corners stand two principal forms of Vajrayogini as Indra's Dakini and Naro's Dakini, who are associated with the two Indian mahasiddhas Indrabhuti and Naropa.