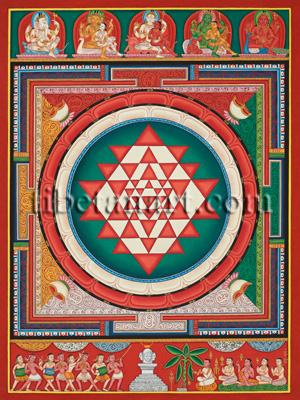 Within the Hindu Shaivite and Shakta Tantra traditions a deity may be worshipped in three different ways: on a gross or outer level as a figurative statue or painting; on a subtle or inner level as the abstract form of a yantra or 'device'; or on a most subtle or secret level as the mantra of the deity. A yantra is much like a mandala in its two-dimensional geometrical construction, yet unlike a painted or powdered sand mandala a yantra is usually drawn or inscribed with a metal stylus on materials such as birch-bark, or upon gold, silver or copper plates. Some yantras, particularly the Shri Yantra, may also be three-dimensionally sculpted from precious materials such as gold, rock crystal or lapis lazuli, and a yantra is traditionally placed upon a flat surface and worshipped in a specific direction.

The Shri Yantra, Shri Vidya, or Shri Chakra is the most well known of all yantras and is a symbolic representation of a Mahayidya goddess who bears the name of Shri, meaning 'the auspicious one'. This important tantric goddess is also known as Tripura Sundari, meaning the 'beautiful lady of the three cities'; or as Sodashi, meaning the 'sixteen-year-old'; or as Lalita, the 'playful one'. Tripura Sundari is one of the ten Mahavidya or 'great knowledge-holding' goddesses of the Shakta Tantra traditions, which represent ten principal and unique aspects of the great goddess, Devi (Durga).

Tripura Sundari is red in colour, beautiful and youthful like a sixteen-year-old (sodashi), and she sits upon a red lotus that may emerge from the navel of the prone form of Lord Shiva; or upon the horizontal couch of Shiva's body, which is supported by four legs that appear in the form of the Vedic gods, Brahma, Vishnu, Rudra and Indra. In her four hands she holds the subjugating attributes of a bow made from sugarcane, five arrows fashioned from different flowers, an iron hook, and a noose that is made from a lotus-stem or adorned with flowers. In this aspect she is similar to the red subjugating Buddhist goddess, Kurukulla, whose name and form is also closely identified with that of Lalita Tripura Sundari.

The Shri Yantra's interior is formed from nine triangles that interlock around a central seed point or 'bindu', with the bindu representing the yantra's presiding goddess. Four of these triangles point upward, representing the male aspect of Shiva as 'fire'; and five point downward, representing the female aspect of Shakti as 'creative energy'. Collectively these nine intersecting triangles create a precise mathematical configuration of forty-three red triangles on a white background. The forty-three triangles are grouped into a series of five wheels or chakras that consist of one, eight, ten, ten, and fourteen red triangles, which progressively emanate from the central bindu outwards.

This configuration occupies the green interior or seed-head of a double lotus-wheel, with either eight or sixteen white petals on the inner lotus-wheel or chakra, and sixteen red petals on the outer lotus-wheel. Outside of these two lotus-wheels is the yantra's square bhupura or 'earth-stronghold', which has four directionally coloured inner quadrants and four T-shaped outer gateways. The entire form of the Shri Yantra is also known as the navayoni-chakra, or 'nine-womb wheel', with its nine-wombs consisting of the bhupura, the red lotus-wheel, the white lotus-wheel, the five intersecting triangle chakras (of fourteen, ten, ten, eight, and one triangles), and the bindu at the centre.

The narrow enclosing wall of the square bhupura is composed of three parallel lines that are coloured white, yellow and blue. The group of deities that reside within the outer white line are the eight Dikpalas or directional protectors, who occupy the four cardinal points and the four inter-cardinal corners. Occupying the same positions on the middle yellow line are the eight Siddhi-Shakti goddesses, who represent the eight great 'siddhis' (attainments) or psychic powers. And occupying the inner blue line are the eight great Matrikas or 'mother goddesses'. In the outer lotus-circle of sixteen red petals reside the sixteen shaktis or offering goddesses that represent attainment of the objects of desire. And in eight of the sixteen white petals of the inner lotus-circle reside the eight shaktis that represent the powers of speech, grasping, moving, rejecting, pleasure, relinquishment, concentrating, and detachment.

Next are the three shaktis or yoginis that reside in the corners of the central red triangle: white Kameshvari (lustful-lady), red Vajreshvari (indestructible-lady), and golden Bhagamalini (vagina-flowered lady). These three tantric goddesses personify Rudra-Shiva Shakti, Vishnu Shakti, and Brahma Shakti. The ultimate dot or bindu chakra at the very centre of the Shri Yantra represents the 'Great Queen of Queens' Maha Lalita Tripura Sundari as Kameshvari, who sits in sexual union with her consort Kameshvara (Mahadeva-Shiva).

In this painting the Shri Yantra's outer square is depicted in the form of a mandala, with narrow black rings containing sixteen golden vajras that serve to protect the two white and red lotus-wheels of sixteen petals. The four corner quadrants within the square bhupura are ornamented with swirling roundels and coloured to correspond to the mandala's four cardinal direction: white (east), yellow (south), red (west), and green (north). The quadrants are surrounded by a stylised frieze of scrolling lotus-petal designs, and in each of the inter-cardinal corners is a lotus-mounted ritual skull-cup with a blood-red interior. The area beyond the square bhupura contains the typical mandala elements of an encircling red 'offering goddess platform' and 'golden beam', gateway pillars, with the outer roof ornaments of a frieze of hanging golden jewel-loops, and the lotus parapet that crowns the top of the roof.

The panel at the bottom of the paintings shows a group of ten dancing musicians on the left, who play upon drums, cymbals and long horns. At the centre is an ornate stone lingam, with three of Shiva's four directional faces adorning its phallic-shaped shaft, which is crowned by a golden bowl filled with water from the River Ganges. On the right is a Brahmin priest who sits upon a yellow cushion and worships the Shiva-lingam as he performs a ritual fire-offering (homa). The Brahmin sits beneath a palm tree as he holds a fire oblation ladle and a ritual text in his two hands. On the left side of the fire hearth are Shiva's attributes of a trident and a damaru, and on the right side is the Brahmin's ritual bell. Seated upon a large green cushion behind the Brahmin are four female worshippers, who are accompanied by the golden offerings of a nectar-vase, a powder container, a mirror, a sacred basil leaf (neem), a water flask, and a bowl of sweets. Above the dancers and worshippers hang five silk cloths that serve as parasols or canopies.