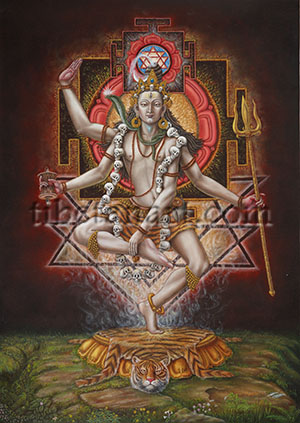 Shiva as Lord of the Dance

His powerful naked and ash-covered body is adorned with a tiger-skin loincloth: rudraksha bead necklaces, bracelets and armlets: heavy golden anklets, and a long garland of fifty dry white skulls. Tied below his knees are strings of little golden dancing bells (Skt. ghungharu), and around his waist he wears two other strands of these spherical bells. The emblem of a golden serpent coiled around a luminous pearl appears at his left hip, and below this hangs his antelope horn. The great naga-serpent Vasuki coils around his neck, its hooded head adorned with a radiant naga-jewel.

With his three piercing eyes Shiva proudly gazes forward, his beautiful and austere face displaying the 'nine dramatic sentiments' of his cosmic dance. His forehead is marked with the three horizontal saffron lines of his tripundra, and his larynx bears the 'blue-throated' (Skt. nilakantha) mark, which represents the poison that he swallowed during the legendary 'Churning of the Ocean'in ancient time. Shiva wears heavy golden earrings and a golden crown with five jewel-topped white skulls. His matted hair-locks billow freely about his shoulders and back, the 'first digit' of the new moon adorns his crown, and from the centre of his coiled topknot cascade the white waters of the river-goddess Ganga, the River Ganges. With his lower right hand Shiva rattles his wooden damaru, its two skull pellets beating out the rhythm (Skt. tala) of his cosmic dance, while with his raised second right hand he makes the abhaya-mudra of protection or dispelling fear. With his lower left hand held in front of his right heel, Shiva makes the dance gesture known as the gaja-hasta-mudra or 'elephant-hand pose', which represents the versatile trunk or 'hand' (Skt. hasta) of an elephant as a symbol of Shiva's omniscient powers. With his second left hand Shiva holds aloft his heavy golden trident, symbolizing his control over the three worlds, the three times, the three gunas or 'qualities of nature', the three principal psychic channels of the subtle body, and his threefold aspect as the supreme creator, preserver and destroyer.

These three aspects of Shiva are emphasized by the three fiery yantras that appear behind his upright body, which are respectively centered upon the lower muladhara-chakra at the level of Shiva's lingam or sexual centre, where the goddess Kundalini resides; the vishuddha-chakra at the level of his throat, and the sahasrara-padma or 'Thousand-petal lotus' above his crown. The lower yantra consists of two large downward-pointing 'female' triangles, which intersect with an upward-pointing 'male' triangle to form an eight-pointed star. The large central yantra appears in the form of a fiery dais encircled by eight red lotus petals and a square bhupura or 'earth-city' with four directional gateways. And the smaller upper yantra combines these elements as Shiva's specific yantra, with the three intersecting triangles forming the central dais of the eight-petal lotus circle with its fiery bhupura.


Nataraja, Nateshvara, or Nriteshvara, meaning the 'King or Lord of the Dance', is the specific aspect in which Shiva manifested when he performed his cosmic dance, known as ananda-tandava, the 'Wild Dance of Great Bliss'. This representation of Shiva as the King of Dance (Skt. nataraja) probably first arose during the sixth century, and with the development of the Saiva-Siddhanta philosophical traditions of South India the image of Nataraja became very popular, particularly during the period of the Chola dynasty (880-1279). The great Chola temple complex of Chidambaram in Tamil Nadu, which is dedicated to Shiva Nataraj, was founded during the reign of King Vira Chola (927-997).

The main legend attributed to this aspect of Shiva describes how he once visited a sacred South Indian forest in the guise of a handsome mendicant. The wives of the sages or rishis who dwelled within this forest were immediately captivated by Shiva's great beauty and they all fell in love with him. Not recognizing that this mendicant was none other than the great Lord Shiva, the jealous rishis decided to overpower and destroy this handsome and youthful ascetic. They first created a magical pit, from which they unleashed a ferocious tiger. But Shiva instantly slew this tiger, skinned it with his fingernail, and then wrapped its skin around his waist as a loincloth. They next unleashed a wild deer, which Shiva seized and paralysed with his left hand. Then they unleashed a vicious poisonous serpent, which Shiva simply wrapped around his neck as an ornament or sacred thread. Finally they unleashed an evil black dwarf known as Apsamara-purusha, the 'demon of forgetfulness', but Shiva merely threw this dwarf to the ground, breaking its neck. Then Shiva commenced his tandava dance upon the back of this dwarf and, as the tempo of his rattling damaru and his wild rhythmical movements increased, the entire fabric of the universe began to disintegrate as his flailing hair-locks knocked the planets out of their orbits.

Many early Chola bronzes depict Shiva in this form as Nataraja, who dances within on orb of fire, his left leg raised elegantly, his right foot pressing upon the dwarf-demon Apsamara, and his matted hair-locks flailing outwards like serpents on either side of his head. With his first pair of right and left hands he makes the abhaya-mudra of protection, and the downward-pointing gaja-hasta-mudra or 'elephant trunk gesture'. And with his second pair of right and left hands he holds aloft the attributes of a damaru and a flame.

Here the damaru represents Shiva as the creator of the universe, with its rhythmic beat creating the first waves of sound and energy particles that arose within the primordial emptiness or 'un-struck sound' (Skt. anahata-nada) of space. His left hand making the abhaya-mudra of protection represents Shiva as the preserver of the universe. The flame, which emerges from Shiva's cupped left palm as he makes the 'half-moon gesture' (Skt. ardhachandra-mudra), represents Shiva as the destroyer of the universe. His right foot pressing upon the 'dwarf of forgetfulness' symbolizes his power to destroy all illusions and ignorance; and his right hand making the gaja-hasta-mudra symbolizes his power to pacify all hostilities and remove all obstacles on the path to liberation.

Collectively these five symbolic attributes and gestures represent the 'five activities' (pancha-kriya) of Nataraja's eternal energy, which are revealed through his blissful and wild ananda-tandava dance: (1) creation (srishti); (2) preservation (sthiti); (3) destruction (sanhara); (4) concealing (tirobhava), or hiding the transcendental essence behind the veil of maya or apparitional phenomena; (5) granting favours (anugraha), or bestowing grace upon devotees. Within the Saiva-Siddhanta philosophical system these 'five activities' correspond to the five syllables of Shiva's mantra, (OM) NA-MA-SHI-VA-YA.

There are also several other Indian legends where Shiva performs the tandava dance, which are mainly connected with Shiva's wrathful aspect as Virabhadra, the 'renowned hero', and these aspects principally relate to his relationship with his shakti, the great goddess Mahadevi. The Linga-Purana describes how: "The trident-holding lord of the devas performed the tandava dance in the charnel ground at dusk, along with a host of pretas and ganas. And after enjoying Shiva's intoxicating dance the great goddess herself danced in the midst of a host of pretas and yoginis." Shiva also performed the wrathful tandava dance when he mournfully carried the body of his first wife Sati across the Indian subcontinent.

Another legend from the Shiva-Purana describes how Shiva once performed a more peaceful and 'playful dance' (natalila) when he first courted Parvati. In this story Mena and Himavat, Parvati's mother and father, are first mesmerized by Shiva's blissful dance and offer him several golden bowls filled with jewels. But much to their indignation Shiva refuses these gifts, as he seeks only the hand of Parvati, and when Himavat's attendants try to drive Shiva out from the courtyard they are overwhelmed by his blazing heat and brilliance. Shiva then transforms himself into Vishnu, Brahma, Surya and many other miraculous forms before he again begs the hand of Parvati. But her parents, deluded by Shiva's maya, do not accede to this request, so Shiva vanishes from their midst and returns to his abode on Mt Kailas. When their anger has subsided, Parvati's parents later begin to develop great devotion for Lord Shiva, realizing that he is source of all liberation and the one who bestows supreme bliss.