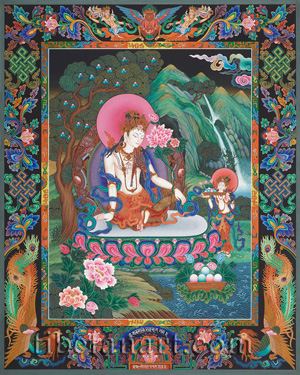 This beautiful composition of Khasarpana Lokeshvara was painted in 2002 by Dinesh Charan Shrestha, who now works and teaches in Berkeley, California. Khasarpana, meaning 'air-gliding', is one of the two-armed manifestations of the bodhisattva Avalokiteshvara or Mahakarunika, the 'great compassionate one'. Khasarpana's complexion is white like an autumn moon, and he sits gracefully in a posture of royal-ease upon a silver moon disc and a multicoloured lotus. His radiant and youthful body is adorned with the five divine silk garments and eight jeweled sambhogakaya ornaments, a serpent adorns his neck as a sacred thread, and an antelope-skin is draped across his left shoulder. With his right hand resting upon his moon disc he supports his seated posture, while with his left hand he holds the stem of a pink lotus that blossoms at the level of his ear.

At Lokeshvara's right is an offering goddess who holds a golden tray of jewels and flowers, whilst another bowl of jewels and flowers rests upon a lotus-leaf in the lake beneath his lotus-throne. His outer aura is ornamented with a pair of jewel-grasping dragons, and he abides amidst a beautiful landscape, with a tree that bears triple-gem fruits and a cascading waterfall appearing behind him. The outer border or torana of this painting is decorated with endless knots, cockerel-pheasants and ornate lotus motifs. The torana is crowned by the squatting form of a four-armed garuda, who grasps the feet of two serpent-crested nagas with his sharp talons. And at the torana's bottom centre is an ornate lotus-emblem bearing Dinesh's name on the lower red plaque, and an upper inscription that bears the deity invocation to Khasarpana Lokeshvara.