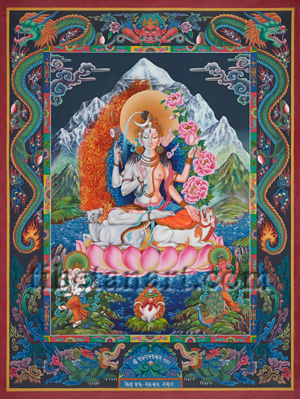 Ardhanarishvara sits in vajra-posture, with his right leg resting upon the back of his tranquil white bull vehicle, Nandi, while Parvati's left leg rest upon the back of her roaring white lion vehicle. Both of these vehicles or mounts rest upon the golden seed-head of a pink lotus, and both creatures gaze up to the faces of their Lord and Lady with their tails loosely crossed. The immaculate pink lotus upon which Ardhanari sits floats upon the blue waters of Lake Manasarovar in Western Tibet, with the great snow-capped white dome of Mount Kailash dominating the background of this painting. Both of these sacred pilgrimage sites are extremely important for Buddhists, Bonpos, Jains and Hindus alike, as Mt Kailash is recognized by all Hindus as the eternal abode of Lord Shiva and his holy family.

The right half of Ardhanari or Shiva's body is strong, muscular, and bluish-white from being smeared with cemetery ash. He wears bracelets, armlets, anklets and necklaces made from small rudraksha beads: a tiger-skin loincloth: and the great naga-serpent Vasuki encircles his chest as a sacred-thread. The left half of Ardhanari or Parvati's body is soft, youthful, beautiful and pinkish-white in colour, with a narrow waist, slender arms, and an aroused breast that is firm and round. She wears lower garments of coloured silks, a pink scarf, and the golden ornaments of bracelets, armlets, an ornate choker, a short necklace of coins, and a long jeweled necklace.

Ardhanari's beautiful face has a tranquil expression of deep meditative absorption, with its three bow-shaped and lotus-like eyes, long slender nose and sweetly smiling mouth unifying its male and female sides. Shiva's side is adorned with a jeweled earring and a skull-crown, a white crescent moon, matted hair-locks that fall about his shoulder, and a coiled topknot - from the centre of which the white stream of the River Ganga cascades. Parvati's side is adorned with a jeweled earring and crown, silk ribbons, and freely flowing black hair-locks that hang freely about her shoulder. With the first pair of right and left hands Ardharani makes the abhaya-mudra of protection at the level of the heart, and the varada-mudra of supreme generosity at the level of the knee. And with the second pair of hands Ardharani holds Shiva's twin attributes of a damaru and trident, and Parvati's attribute of a red lotus.

Below Shiva's bull is white Ganapati, their elephant-headed 'first son', who dances upon a rock with his blue rat vehicle squatting in adoration near his right foot. Ganapati has three eyes, four arms, large ears, a broken left tusk, and his trunk and forehead are marked with Shaivite symbols. He wears gold ornaments, a five-skull crown, a serpent necklace, a red and blue silk dhoti or loincloth, and a billowing green silk scarf. With his first pair of right and left hands he holds his favourite foods, a white radish and a laduka sweet, and with his second pair of hands he holds aloft a rudraksha bead rosary and an axe. With his trunk, or 'extra hand', he holds aloft another laduka sweet.

Below Parvati's lion is their 'second son' Kumara, who is also known as Skanda or Karttikeya. Kumara, the 'youthful', is red in colour with three eyes and four arms, and he dances upon a rock with his peacock vehicle appearing in front of him. Kumara wears golden ornaments, a five-jeweled crown, a blue and red silk loincloth, and a billowing green silk scarf. With his first pair of right and left hands he makes the abhaya-mudra of protection and holds a golden water-pot, and with his second pair of hands he holds aloft a rudraksha bead rosary and a spear.

Amidst the flames on the lower central rock is a large skull-cup of blood containing the wrathful offering of the five senses: a tongue, two eyes, two ears, and a heart pierced by the shaft of a victory-banner. The fifth sensory organ of a nose is commonly absent in many Newar paintings. The outer border or torana of this painting is decorated with the traditional Newar symbols of: the crowning serpent-devouring head of Chepu or kirtimukha, a pair of jewel-grasping dragons, a pair of 'water-monsters' or makara, and a plaque at the bottom centre that bears the Ranjana deity invocation 'Shri Ardhanarishvara-ya Nama' at the top, and the artist's name, Sukha Raj Tamang, at the bottom.


An Indian legend of Ardhanarishvara's origin relates that the creator-god, Brahma, once asked Shiva to divide himself into two halves. Upon witnessing this miracle Parvati then said to Shiva: "Let me abide within you permanently, embracing you limb by limb." Parvati then merges herself into Shiva's body and all duality is eliminated. Another legend relates how Brahma first creates the male prajapatis, or 'lords of beings', and then commands them to create other beings in order to populate the three worlds, but they are unable to do so. Brahma then meditates upon Shiva, who spontaneously manifests in the form of Ardhanarishvara to reveal to Brahma the procreative necessity for both the male and female sexes.

A verse from the Kurma Purana states: "The great Lord Maheshvara (Shiva) never delights with a wife who is distinct from his own self. For the joy within him is in truth the Goddess." Thus Shiva is genderless. Shiva is the All and thus inseparable from his own energy or shakti. As a composite deity Ardhanarishvara represents the merging of all dualities into a single unity, the fertile cosmic seed that engenders the spirit or life force (prana) with matter (bhuta), or the union of primordial man (purusha) with mother-nature (prakriti).

Within the kundalini-yoga traditions Ardhanarishvara is the presiding deity of the ajna-chakra, the two-petal lotus that is located at the forehead and commonly referred to as the 'third eye' of clairvoyance or divine wisdom. It is within the ajna-chakra that the two main subsidiary psychic nerve channels meet and merge their energies together into the central-channel or sushumna. The white channel that ascends on the right side of the body is known as the pingala or 'lunar-channel' and identified with Shiva; and the red left channel is known as the ida or 'solar-channel' and identified with Shakti. The white and red essences or 'drops' that flow through these channels are symbolically equated with semen and uterine blood, and it is essentially on this esoteric level of polarity symbolism that the composite form of Ardhanarishvara can perhaps best be understood.