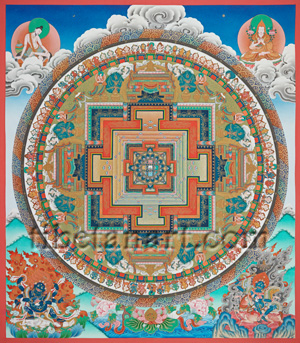 Sarvavid, meaning 'all-knowing', is a white four-faced and peaceful sambhogakaya aspect of Vairocana Buddha, whose yoga-tantra practice was first reputedly taught to the gods in order to 'eliminate all the miseries' of their possible future rebirths. This complex double-mandala has an 'inner mansion' of thirty-seven deities, and an 'outer mansion' of sixty further residents, all of whom are represented by the small symbol of a vajra-handled curved knife resting upon a moon disc and lotus. All of these symbolic deities face inward towards Sarvavid Vairocana, who occupies the central chamber of the lotus dais at the mandala's centre. The traditional protection wheels of the lotus-circle, vajra-ring and fire-mountain encircle the complex outer structure of the mandala palace. But this particular mandala has a white protection wheel that contains the minute and meticulously painted forms of ninety-six lokapalas or guardian deities, many of which are common to both the Hindu and Buddhist traditions. In the upper left and right corners are the Mahasiddha Jnanavajra, and the founder of the Gelugpa tradition, Tsongkhapa (1357-1419). In the lower corners are the Gelugpa protectors, Six-armed Mahakala (left), and Paldan Lhamo (right).

Sarvavid Vairocana is the central deity of a thirty-seven-deity mandala of the yoga-tantra class, which is one of twelve mandalas that are described in the Sarvadurgati-parishodhana Tantra, the 'Tantra that eliminates all evil rebirths'. Shakyamuni Buddha is believed to have first taught this Tantra to the gods in the heaven of the 'Thirty-Three', which is ruled by the great Vedic sky-god Indra. Sarvavid, meaning 'all-knowing', is a sambhogakaya aspect of Vairocana Buddha, the 'Lord of the Tathagata Family', who is peaceful and white in colour with four faces. He sits in vajra-posture upon a moon disc, lotus and lion-throne with his hands resting upon his lap in the dhyana-mudra of meditative equipoise, and his symbolic attribute is a wheel.

The thirty-seven deities of the Sarvavid Vairocana Mandala occupy the square 'inner mansion' of the mandala palace with its four directional gateways. Outside of this is the 'outer mansion' with its own four gateways, which houses another assembly of sixty deities or residents. All of these ninety-seven deities are represented here in their specific positions or 'lotus-seats' by the identical symbol of a small lotus and moon disc with a vajra-handled curved knife resting upon it. All of these lotus-seats face inward towards the one that represents Sarvavid Vairocana at the centre.

Surrounding the central dais is a lotus-circle of sixteen blue petals, in each of which one of the lotus-seats of the sixteen 'vajra-deities' reside. These sixteen deities all have the prefix 'Vajra' before their named attribute or quality, and they appear in the forms of peaceful bodhisattvas seated upon moon discs and lotuses. They each have one face and two arms, a particular colour, wear silk garments and jeweled ornaments, and hold specific attributes. In a clockwise sequence from the northeast (bottom right) corner they are: Vajrasattva, Vajraraja, Vajraraga, Vajrasadhu, Vajraratna, Vajratejas, Vajraketu, Vajrahasa, Vajradharma, Vajratikshna, Vajrahetu, Vajrabhasha, Vajrakarma, Vajraraksha, Vajrayaksha and Vajrasandhi.

Encircling this lotus-circle is a blue ring adorned with golden vajras, the outer circumference of which just touches the five-coloured walls and gateways of the inner mansion. These walls are composed of five layers of coloured light, which are respectively blue, green, red, yellow and white from the inside out, so that the walls appear blue on the inside and white on the outside. In each of the inner mansion's four inter-cardinal corners are two blue petals enclosing lotus-seats, which collectively represent the 'eight offering goddesses': with Lasya (beauty) and Dhupa (incense) in the southeast corner; Mala (garlands) and Pushpa (flowers) in the southwest corner; Gita (song) and Aloka (light) in the northwest corner; Nritya (dance) and Gandha (perfume) in the northeast corner. And on the blue petals in the four gateways are lotus-seats that represent the four goddesses who guard these gateways: Vajrankusha (east), who holds an iron-hook; Vajrapasha (south), who holds a rope-snare; Vajrasphota (west), who holds an iron-chain; and Vajraghanta (north), who holds a vajra-handled bell.

Surrounding the five-coloured walls of the 'inner mansion' are the traditional linear square sections that represent the outer wall, roof and gateway structures of the inner mandala, which manifests as the upper-floor of the palace. The ground floor of the 'outer mansion' extends beyond the inner mandala, with its four coloured quadrants separated into square sections by three thin blue lines.

The sixteen lotus-seats within the second section represent the assembly of the 'Sixteen Arhats', with four Arhats occupying each of the four sides. On the blue eastern side are Angaja, Ajita, Vanavasin and Kalika. On the yellow southern side are Vajriputra, Bhadra, Kanakavatsa and Kanaka-Bharadvaja. On the red western side are Bakula, Rahula, Cudapanthaka and Pindola-Bharadvaja. And on the green northern side are Panthaka, Nagasena, Gopaka and Abheda.

The twelve lotus-seats within the third outer section represent the assembly of twelve un-named Pratyekabuddhas or 'solitary realizers', who are beings that have attained the state of liberation naturally and without the need for a teacher. Four of these Pratyekabuddhas appear in the corners of the outer mansion, with two others appearing on each directional side.

Finally in each of the four gateways of the outer mansion are assemblies of four lotus-seats that represent the outer protectors of the four directions. Each of these sixteen protectors is wrathful in appearance with one face, three eyes and two arms, and stands in pratyalidha posture upon a red sun disc and lotus amidst a blazing mass of fire. The two central guardians in the east are white, the two in the south are yellow, the two in the west are red, and the two in the north are green. The two flanking guardians in the east, south and west are dark blue and light blue, while the two in the north are red and light blue.

Surrounding the five-coloured walls of the 'outer mansion' are the five traditional linear square sections that represent the outer and upper structure of the mandala palace. The first is the flat red plinth that surrounds the walls, which here is decorated with golden dragons. The second is the golden beam that runs along the top of the walls and is ornamented with symbols of the five elements. The third is a dark blue section with hanging loops of golden jewels, which represents the jeweled ventilation-lattice and jewel loops at the top of the walls. The fourth is a green section with gold designs that represents the structural components of the roof, and the fifth is the lotus-parapet that runs around the flat roof of the palace.

Each of the palace's four elaborate gateways has two rainbow-coloured pillars, nine horizontal beams, six silk banners, and the crowning Buddhist emblem of a golden wheel flanked by two deer. Encircling each of these gateways are the open golden prongs of the vast crossed-vajra that underlies and supports the entire structure of the mandala palace as a symbol of unshakeable stability. The outer green circle that represents the palace's sacred grounds is decorated with small golden lotus roundels, and upon this ground appear the various auspicious and celestial offerings that adorn the roof. A silk parasol appears at each corner of the roof, and three golden vases stand above the lotus parapet on each side of the four gateways, with the two outer vases supporting silk banners, and the inner vases supporting wish-granting trees. Two cloud-borne heavenly gods float above each of the gateways, while two of the eight great Indian mahasiddhas of this mandala's yoga-tantra lineage appear above the two banners on each side of the four walls.

Encircling the palace grounds is the 'lotus-womb' protection wheel, which consists of seventy-two variegated lotus petals that are alternatively coloured red and blue, and orange and green. Then outside of this is a white protection wheel that contains ninety-six guardian deities or lokapalas, many of which are common to both the Hindu and Buddhist traditions. These deities include the Four Great Kings and the Eight Dikpalas who occupy the cardinal and inter-cardinal directions, the eight wrathful realm protectors with their consorts, the twenty-eight nakshattras or 'lunar mansions', and a host of other worldly gods, naga-kings, wealth gods and local guardian deities. These ninety-six lokapalas are equal in number to the ninety-six residents of the inner and outer mansions that surround Vairocana at the centre.

The next protection wheel is the 'vajra-fence and canopy', which is represented by a narrow green ring of sixteen golden vajras that are interspaced with circular 'vajra-symbols' and an undulating 'vajra-thread'. This wheel symbolizes the impenetrable hemispherical dome of interlocking vajras that covers the entire mandala palace.

The last protection wheel manifests as forty-eight banks of coloured flames that circle in a clockwise direction. This outer wheel is known as the 'mountain of fire', and also forms a vast hemispherical dome of fire over the entire mandala to represent that no impurities can enter within. These protection wheels symbolically protect the mandala from the three great forces of nature that can ultimately destroy all world systems, floods (lotus-womb), earthquakes (vajra-fence), and conflagration (fire-mountain).

In the upper left corner is the Indian mahasiddha Jnanavajra, who sits at ease on a deerskin and cushion with a basket of books behind him. In the upper right corner is Tsongkhapa (1357-1419), the founder of the Gelugpa or 'yellow-hat' tradition, who holds two lotuses bearing Manjushri's wisdom attributes of a sword and a book. In the lower corners are the two Gelugpa protectors, Six-armed Mahakala (left), and Paldan Lhamo (right); and at the bottom centre is a lotus-lake, where a leaf supports the sense offerings of a golden wheel (sight or form), a lute (sound), a perfume-filled conch (smell), fruit (taste), and a silk ribbon (touch).