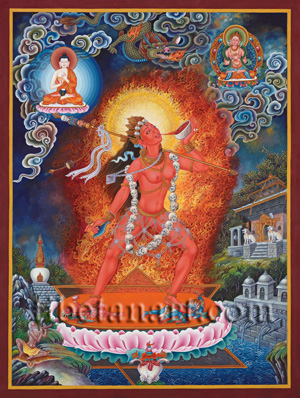 This composition depicts Vajrayogini (Tib. Dorje Naljorma) in her form as Naro Khandroma or 'Naropa's Dakini'. Vajrayogini belongs to the Highest Yoga Tantra class of deities and is the principle female yidam deity or dakini in the Vajrayana Buddhist pantheon. As the consort of Chakrasamavara she is of equal importance in both the Tibetan and Newar Buddhist traditions. In the Newar tradition Vajrayogini has four main aspects, each of which has her own special temple within the Kathmandu Valley. And these four temples are located at the sacred sites of Sankhu, Parping, Bijeshvari, and Guhyeshvari.

Sankhu temple is dedicated to the aspect of Vajrayogini as Naro Khandroma who is associated with the Indian Mahasiddha Naropa; although the presiding four-armed deity of Sanku Temple is now commonly known as Khadgayogini or Ugratara. The temple is perched in a pine forest high above the ancient 'conch-shaped' Newar town of Sankhu, and is accessed by a steep ascent of stone steps. The background landscape of this painting depicts the forest temple of Sankhu and the sacred water tank that is situated halfway up its ascent, with its makara-headed waterspouts, which are known in Newari as 'hetimanga'. In the lower left corner the Indian Mahasiddha Naropa appears blowing upon his antelope horn, with his cave and a stupa appearing behind him. And in the central foreground is a skull-cup of blood that contains the wrathful offering of eyes, a tongue, a banner and victory flags.

Vajrayogini abides within a dharmodaya or 'reality source', which is composed of two intersecting triangles that form an inverted three-dimensional double tetrahedron, with its open top appearing as a six-pointed star. Within this dharmodaya rests the pink lotus and golden sun disc upon which Vajrayogini stands, with her left foot trampling upon the head and heart of black Bhairava, and her right foot pressing upon the breasts of red Kalaratri. Bhairava, the 'terrible', is a wrathful aspect of Shiva and his head and heart represent the 'seats of ignorance and aversion'. Kalaratri, the 'black night', is a wrathful manifestations of Parvati or Uma (Shiva's consort), and her breasts represent the 'seat of desire'. Bhairava is blue-black in colour with three eyes and four arms. He wears a tiger-skin loincloth and bone ornaments, and holds a curved knife, a skull-cup, a damaru, and a khatvanga in his four arms. Kalaratri is naked and ruby red in colour, with three eyes, two arms, and an emaciated body. She wears bone ornaments and holds a curved knife and a skull-cup in her two hands.

Vajrayogini leans towards the left in alidha-posture, with her left leg bent and her right leg extended. She is radiant and ruby-red in colour like a pomegranate flower, and her divine form shines with the brilliance of a hundred thousand suns. From each pore of her skin emanate rays of wisdom light, which blaze like the fire at the end of an aeon. She has one face, two arms, and her head is inclined back with her three eyes gazing upward towards the heavenly realm of the dakinis. She is naked, beautiful and passionate, as youthful and lusty as a sixteen-year-old, with firm round breasts, erect nipples, wide hips, and a pubic mound that is shaped like the back of a tortoise. Her long black hair flows freely down her back, and she wears the Newar ornaments of a jewel-topped five-skull crown, golden earrings, bracelets, armlets and anklets, a golden choker and a necklace that encircles her breasts, an embossed medallion on a silver chain, and silver finger rings. Around her neck hangs a garland of dry white skulls, and from her golden belt hangs an intricately looped bone apron, with roundels that depict auspicious symbols and a lower pendant that reveals her flying form as Vidyadhari Yogini.

Her right arm is extended downward as she holds a vajra-handled curved knife that she circles towards the ten directions, with her index finger raised in the threatening tarjani gesture. Her raised left arm is bent upward as she holds a tilted skull-cup full of blood, which she continually pours into her open mouth. The fingers of this hand point upward, the skull is white like the moon and marked with a vajra, and the fresh blood she drinks has the nature and taste of nectar.

Balanced at an incline across her left shoulder is her tantric staff or khatvanga, which is equal in height to her own body and represents her consort, Heruka Chakrasamvara. The khatvanga's golden shaft is sealed at its base with a half-vajra, while its upper shaft bears the attributes of a crossed-vajra, a golden nectar vase, three impaled heads, and a crowning half-vajra. The lower head is red and fresh, the middle head is the mask of blue Bhairava, and the upper head is a dry white skull. Symbolically these three severed heads represent the three kayas and Vajrayogini's triumph over the three poisons of attachment (red head), aversion (blue head), and ignorance (white skull). From the base of the crossed-vajra hangs a thin golden chain that bears the 'method and wisdom' attributes of a rattling pellet-drum or damaru and a tinkling silver bell. A long white silk ribbon is tied around her khatvanga's upper shaft, which billows freely to represent the teachings of the various Buddhist vehicles or yanas.

Seated upon a white moon disc and a pink lotus amidst the clouds in the upper left corner is white Vairocana Buddha, the 'Lord of the Tathagata Buddha Family' to which Vajrayogini belongs. He wears the three red monastic robes, supports a blue alms-bowl in his lap, makes the teaching gesture with his two hands, and is encircled by a radiant blue aura. A fierce dragon writhes amidst the central clouds, and in the upper right corner is red Vajradharma, who manifests as the 'speech' aspect of the Primordial Buddha Vajradhara in the 'mother-tantra' practices of Vajrayogini. Vajradharma sits in vajra-posture upon a moon disc and a multicoloured lotus, he wears the five silk and eight jeweled ornaments of a sambhogakaya deity, and with his hands crossed in vajra-humkara-mudra he holds the method and wisdom attributes of a vajra and bell.

This painting was made by the Newar artist Sukha Raj, who based this composition upon an original composition by Deepak Joshi, who is one of the most respected and knowledgeable Newar Buddhist artists of Nepal.